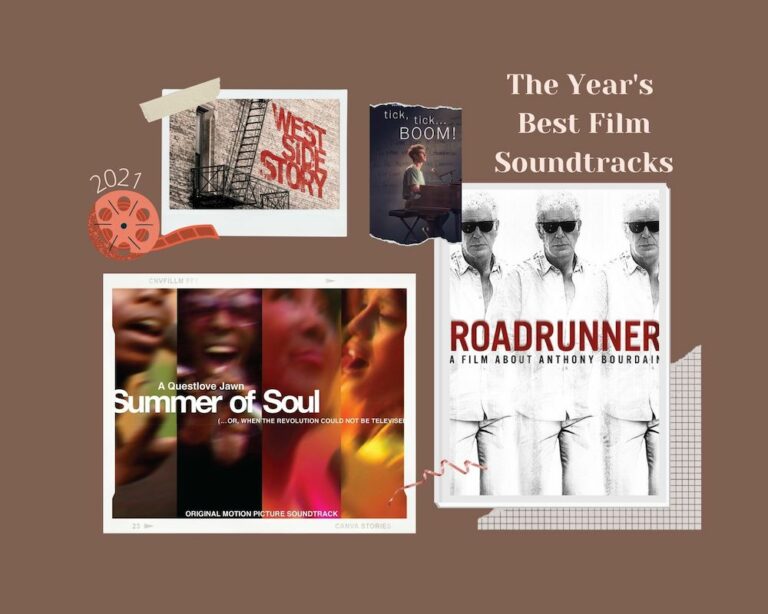 2021 wasn’t much better than 2020, but the year’s best soundtracks prove it was slightly less terrible.

Why even make a soundtrack? Most people listen to music through their favorite streaming service and do it by choosing a list of tracks they want to hear. A soundtrack seems obsolete and even a little old-fashioned. Except that, in 2021, a slew of first-rate soundtracks accompanied all the films that had been stalled in 2020.

A total cinephile’s dream, as one amazing film after the next has become available via streaming and in (some places) actual theatres, the albums are as loveable as their visual counterparts. It’s not too late to drop a needle on any of these 2021 soundtracks and relinquish control. Consider NOT spending another second curating your list in lieu of taking a sonic adventure with any one of these albums.

As many of these soundtracks prove, some great ideas transcend time and space.

Lin Manuel Miranda’s directorial debut is an adaptation of musical writer Jonathan Larson’s work and life. Larson fans will love the soundtrack for the Rent creator’s approach, mainly, telling key story points through song. What’s great about listening to the tick, tick…BOOM! soundtrack is that each song moves the plot of the story forward. Many musical soundtracks remind us of character emotional truths or support obscure but important details. BOOM! has its fair share of these too, like “Green Green Dress” or “Sunday,” but other songs like “Johnny Can’t Decide” tells the story of Larson’s struggle between pursuing his dream of being a successful musical writer and staying with Susan, his girlfriend. “Real Life” is Robin de Jesus’ emotive performance about the AIDS epidemic ravaging the lives of New Yorkers – a constant underlying threat to the group of friends in Larson’s circle. In addition to being entertained by the storytelling facets of these show tunes,  fantastic vocal contributions by Vanessa Hudgens, Tariq Turner, and The Mountain Goats make the songs richer and more varied. Finally, it’s noteworthy on its own to call out Andrew Garfield’s impressive performance of Larson – no small feat.

Another accomplishment by acclaimed director Paul Thomas Anderson is Licorice Pizza. Like the worlds he created in Boogie Nights and Magnolia, Licorice Pizza’s atmospherics lean heavily into the sounds of their era. Anderson, ever the authority on total film immersion for his viewers, draws us deeper into his characters, their lives, the overall story – and the aura of them all – with this musical masterpiece. Licorice Pizza takes place in California before I was even born, but tunes from David Bowie, Nina Simone, and Blood, Sweat & Tears ground me in this unfamiliar time. Simultaneously, Jonny Greenwood’s melodic composition of the tune “Licorice Pizza” adds the right amount of heart to tie audiences to the less specific film attributes than time. For example, the universal themes of love and youthfulness make this story timeless. Whether you’ve seen the film or not, you can enjoy this spirited soundtrack; while seeing the film only stands to enhance the emotional resonance of songs like Nina Simone’s “July Tree” or Taj Mahal’s “Tomorrow May Not Be Your Day.” The long and the short of it is, PTA has done us another solid.

The music of this mostly live action film is very much out of a Disney soundtrack handbook. It makes the case for soundtracks being out of vogue because it is as on the nose as you could ever fathom… but as a standalone piece, it is a rocking listen!  Cruella opens with a positively feminist anthem of a title track by Florence + The Machine. A good girl/bad girl contemplation plays out as Estella embraces herself as Cruella. We hear the Stones and feel warmth for a suffering young woman who’s been victimized but also feel her wrath as she marches across a runway with a vigor to “I Wanna Be Your Dog.” The film is totally plussed up with The Doors’ “Five to One” and The Clash. It’s bold and spunky, which make it worth the listen.

If your eyebrows are kissing your hairline at the absence of Gaga or 30 Seconds from Mars on the House of Gucci soundtrack, you’re not alone. While surprising, don’t let it sour you to this eclectic mix of musical masters. Press play and enter the glamorous world of Italian fashion during the late 1970s. The record features legends, like the tenor Luciano Pavarotti, along with Dame Judy Sutherland. Although, it’s not all boujee Italian operatics and is far from missing the pop musicality of one Lady Gaga. David Bowie, Donna Summer, Blondie, New Order, George Michael, and the Eurythmics are a few of the familiar artists featured. So, even if you are the biggest Jared Leto fan on the planet, it’ll be tough to resist this mix. “Una Notte Speciale” by Alice feels like dancing under a glittery disco ball thanks to its synth pop sound. While Catrina Caselli’s Italian cover of The Monkees’ tune “I’m a Believer” will remind you that this song is worthy of life beyond Shrek. Do something ultra-fashionable in lieu of spending time on making your own playlist. Indulge in a start to finish listen of  the House of Gucci soundtrack and feel like you’re head-to-toe in haute couture.

If you’re not familiar with the Sparks brothers, this soundtrack will give you a taste of their intriguing art rock style. Edgar Wright released a documentary about the duo this year because the two are worthy of their own story. As for Annette, stars Marion Cotillard and Adam Driver play the leads and perform a number of the songs. “May We Start?” and “True Love Finds a Way” incorporate choral singing groups and make the songs sound full and resonant. Listeners will find that some of the scenes melt into these songs, too, think atmospherics like cars and newscasts. At times, this soundtrack is stringy, orchestral, and dark. “I Have The Same Dream Every Night” is sung with Driver’s raw energy, making it both spooky and intriguing, for example. Annette is a fascinating listen. If you want a big orchestral sound and drama, you won’t be disappointed.

Judas and the Black Messiah

This is a far cry from an uplifting film. In addition to the horrific assassination of Fred Hampton, the heinous institutionalized persecution of the Black Panthers is dramatized in this movie. The good news is, Judas and the Black Messiah is chock full of award-worthy performances and its musical accompaniment is just as mesmerizing. Unlike other films on this list, Judas doesn’t rely on period music to establish a tone. Instead, an all-star list of talents ranging from Jay-Z to A$AP Rocky deliver hard hitting verses. At the same time, melodies float along in songs like “Fight For You”  by H.E.R and in Angela Hunter’s “America.” Rakim’s “Black Messiah” is a standout for its unparalleled MC prowess paired with the telling of the Panther’s story. Don’t miss this soundtrack, because beside supporting the basis of the film, it’s a standalone for its epic sounds.

I confess to being totally biased when it comes to director Morgan Neville’s Roadrunner playlist. Neville didn’t just include songs from the documentary on Anthony Bourdain, but combed through the chef’s writings, social media, and friends to find his very favorite songs. The result is nearly a hundred songs from across the musical map (which is hardly surprising for a guy who travelled the world with an open heart, mind, and stomach). The writer and chef turned TV star’s aural tastes included shaggy, punky, psychedelic (and at times), twangy tunes from artists like The Clash, The Stooges, Brian Jonestown Massacre, Modern Lovers, Joy Division, and Arms. Since this isn’t actually a soundtrack, it doesn’t warrant the breakdown of why it succeeds, but it does warrant a genuine listen because it’s an eclectic collection of Bourdain’s most loved songs, artists and acts. Something about hearing them reminds us of a man who was generous enough to share himself with us. These songs and this film’s specific playlist are a kind of memorial of him that I like to visit.

Steven Spielberg took the famous 1961 film version of Romeo and Juliet (not the 1957 stage production), with music from Leonard Bernstein and Stephen Sondheim, and gave it a make-over. All of the greats are still there, they just appear in a new order, and there’s a spirited addition – “La Borinqueña.” The Puerto Rican anthem adds dynamism to West Side’s existing sounds. Spielberg’s new take has been lauded for its improvements to the characters’ backstories, casting, and adoption of a character called Valentina, who is played by Rita Moreno (the 1961 film’s original Anita). The incredibly moving song “Somewhere,” which was originally performed by main characters Tony and Maria, is now sang by Moreno in Spielberg’s version. Check out the new West Side Story if you love the old and want to see what’s working musically and inclusively about the new. Bernstein and Sondheim haven’t been disregarded so much as reconsidered in a great, modern, way.

Summer of Soul (… Or, When The Revolution Will Not be Televised)

Thankfully, this life-changing musical event has finally been “televised.” It definitely comes too late, and it’s for anyone who can stream it (hardly a widespread audience), but the fact that this footage made it out of 1969 NYC seems miraculous.  Thanks to Ahmir Questlove Thompson, performances by ground-breaking artists like Nina Simon, Sly & The Family Stone, Stevie Wonder, The Staples, the 5th Dimension, The Temptations, BB King, and Gladys Knight & The Pips (to name a few) have been curated onto the film’s soundtrack. Tap back into the energy and love that filled the air at 1969’s Harlem Culture Festival in Marcus Garvey Park (formerly known as Mount Morris Park). A mix of the world’s most influential singers and musicians make this a completely enthralling, nostalgic, live music listen. Summer of Soul‘s soundtrack proves that great music never stops moving its listeners no matter how much time goes by.

What’s absolutely fascinating about the director Todd Haynes is that he can tell a story about who and what is true with as much verve as his fictional films. You’d be hard pressed to find a work by Haynes that is not riveting, such is the case with 2021’s music documentary, The Velvet Underground. Besides the 11 Velvet songs, the soundtrack includes influences and associated music talents of the era. You’ll find Bo Didley’s rendition of “Road Runner” from his live performance in Myrtle Beach. The far out guitar riffs come  crashing in like waves and the influence on Reed seems like an obvious oversite despite years of listening. The Primitives performance of “The Ostrich” is outstandingly fun and Velvet Underground-y. However, what makes this a hit is that it is essentially a compilation of sounds from the guys who laid the groundwork for zillions of amazing acts that followed their lead. It’s really as simple and as robust as that.