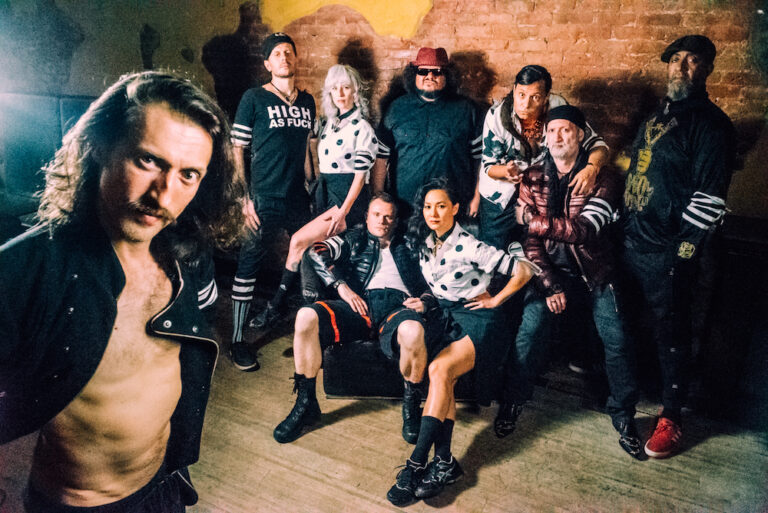 Eugene Hütz talks about the “Roaring 2020s,” punk rock and perseverance, living in Brazil, and a new album that he tells us is due out next year.

When it comes to having an immense stage presence and infectious energy, very few acts pull it off like the New York City gypsy punks Gogol Bordello. It’s a multicultural cornucopia of rhythms, beats, chords, and riffs, so if you haven’t gotten the chance to see them live yet then you’ve surely been missing out. Around the tri-state area, people will get three chances to see what the fuss is all about. These chances are at the Starland Ballroom in Sayreville, New Jersey on December 29, Franklin Music Hall in Philadelphia on the following night, and at Brooklyn Steel on New Year’s Day. The band has been working on some new material, too, which means you will be able to hear a few tunes you haven’t heard before if you get a chance to attend.

The Aquarian had a talk with frontman and guitarist Eugene Hütz from Gogol Bordello ahead of the trio of shows about a new single and music video that’s out, abiding by a DIY aesthetic, Ukrainians in Brazil, and how the struggles of the past few months inspired the band’s next album.

Back in August, Gogol Bordello released a music video for “Roaring 2020s (RenaiDance)” about the COVID-19 pandemic’s effect on the current decade. Musically, the song has a lot going on with a few breakdowns and more of a string presence. To me, the single harnesses a sound that seems to hark back to the band’s earlier material. How would you describe the songwriting process for the track?

Last year had kind of a very intense filter and it filtered things out back to the essence. It’s a very natural process of that song appearing because, for many of us, punk rock is the best thing that has ever happened and it continues to be so, especially in times like this. Music like punk rock is irreplaceable, punk rock has always had the ability to repurpose new music, and the bare bones of it is kind of a celebration of perseverance.

I can totally see that. What was the experience like making the music video? Did you use a lot of different locations to shoot different scenes? Some scenes have you outside by some rocks while others seem to be in an artist studio.

It actually started with a couple phone calls from friends who all wanted to shake off the rust and reset the vibe. These are some friends who are performers in their own right and who appear in the video. It all came together naturally through all of us not giving in to the sordid nature of the picture but instead taking the “Roaring ‘20s” idea to some kind of fun-loving, idiot savant, self-amusement level. The whole video is very, very DIY and it was made around the corner here and around the corner there in New York City with a very limited supply and several friends who were down to carry heavy things at 3:00 a.m. after a good amount of shooting.

The quality of the video is great and for DIY effort I think it came out pretty well so congratulations on that.

It’s always been our aesthetic from the very beginning. The beauty of being in a punk rock band and having that way of seeing things is that you know you’ve done years of very hard touring in a van and you’ve done all sorts of minimalistic things. You know that you can do it on a plane, on a well-respected bus and you know you can tour when duty calls in a van again. That’s not a problem for us.

Before moving back to New York City, you used to live in Brazil. You lived in both Rio de Janiero and São Paulo, so being from Ukraine how would you describe the Latin American culture there from your point of view? What was it like living down there?

That’s a very interesting question, because on top of a very deep love for Brazil, which initially developed through a love for Brazilian music, as I was making my way down there I had even more of a love for the country’s vibe, people, and lifestyle nuances that they champion. Along with all this, Brazil is also full of Ukrainians.

Yeah, the immigration to Brazil from Ukraine started back during the 1970s and I’ve met Ukrainians all over Brazil, especially in São Paulo and other places. In fact, one of my favorite Brazilian musicians, Fredi Chernobyl, as you can tell by his stage name is actually Ukrainian-Brazilian. I didn’t know that until I met him in person but I always loved his band Comunidade Nin-Jitsu, it’s a great punk rock band from Porto Alegre. It has a magical vibe because as much of a transplant as I was, at the same time I had these nearly mystical experiences like seeing somebody’s foot printed into fresh pavement in Brazil. You know how kids will leave their feet in the pavement, right?

I wanted to have my birthdate next to it and somehow it was there before I got there. It’s a special side of Brazil that if you live there is a very, very rich, powerful, life-giving force.

That’s amazing. I didn’t realize that Brazil had a Ukrainian community. You’ve done a lot of work in film over the years from acting in Everything Is Illuminated and Filth & Wisdom along with having Gogol Bordello’s music be part of various soundtracks. Has film always been another passion of yours or did you sort of fall into it because of music?

Our music is indeed quite cinematic and it’s just the nature of it. I think that sensibility naturally leaks through the music because film is not something that’s my natural fit. I was much more of a reader and a novel scout when I was younger…. I’m not old yet. I actually didn’t see film as something magnificent at first – I saw it as some sort of disposable form of book culture until certain moments where I realized that the great novelists of our time basically are film directors. It kind of reset my vibe about it and I see it as a very powerful force while being a very complimentary thing if it’s done right.

Don’t get me wrong, I don’t have this whole worshiping mentality about film. I think a lot of it is total crap.

Good films can be hard to find just like any other artform these days. You have to wade through a lot of the crap to find something you like.

Yeah, I think with film it might actually be even harder.

One of my huge influences on me growing up was my uncle, the brother of my father who is a very well-respected painter in Ukraine. Since I was literally two years old I was constantly taken to the studio while being raised with a high quality visual library of paintings. Once you get that into your hard drive it becomes a natural filter and you can’t really get down with stuff that’s below the mark.

With “Roaring 2020s (RenaiDance)” being out, can we expect a new album to follow it up next year? Is Gogol Bordello already in the studio working on a record?

Absolutely. Actually, our first tour back that started in September became – as intense, cathartic, and stressful as it has been – the inspiration for the new record. Unfortunately, we were two people down by the end of it because of COVID-19. To overcompensate, I switched back to electric guitar and when I came home from the tour I was completely reconnected with my original instrument. I started as a punk rocker when I was 13 or 14 years old playing electric guitar and that went on for many, many years before I started taking acoustic guitar more seriously.

The reconnection of writing on electric guitar paved the way for the original batch of songs for the new record so it’s a very boisterous approach. Usually I write songs very quietly or simply by myself in the back of the bus or out in some kind of quiet place. This one is loud as fuck straight off the bat, straight out of the gate.

KEEP UP WITH GOGOL BORDELLO BY CHECKING OUT THEIR WEBSITE! GET TICKETS TO THEIR END-OF-YEAR SHOWS BY CLICKING HERE!