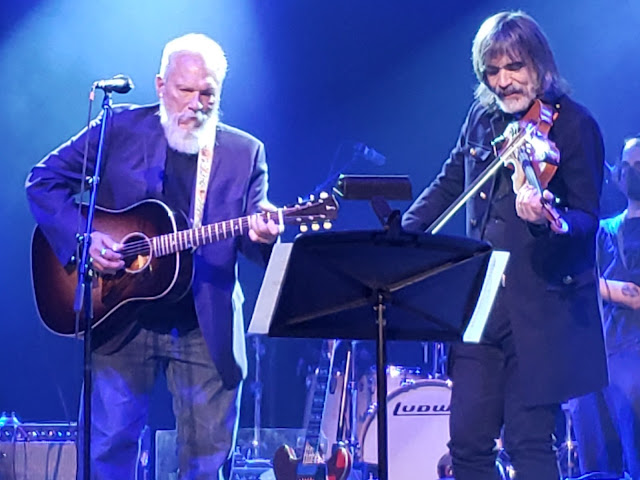 The Capitol Sessions at the Capitol Theatre / December 17, 2021

The concept of The Capitol Sessions: Songs from a Rock Palace That Impacted the World was to honor the musicallegacy of the Capitol Theatre in Port Chester, New York. Built in 1926, the suburban theater hosted vaudeville, films, plays, comedy, weddings, and bar mitzvahs in its history, yet it is best remembered as a rock palace from 1970 to the 1980s, with a few concerts in the 1990s. The theater returned as a concert hall in 2012. The songs that would be played live on December 17 would be songs that were played at the theater in its glory days.

Did the Capitol Theatre truly impact the world? Well, maybe equally as much as hundreds of other rock concert halls in the world, in that this circuit of theaters gave the Woodstock generation frequent opportunities to gather around live rock music. Perhaps the venue’s most impactful point is that thanks to its newest owner, Peter Shapiro, the 1,800-capacity venue is hosting live music again.

Larry Campbell organized the Capitol Sessions concert, which benefitted HeadCount, a not-for-profit organization specializing in voter registration among concert attendees. For several years, Campbell was the musical director for Levon Helm’s Midnight Ramble barn concert series in Woodstock, New York, so not surprisingly, Campbell invited many of his friends to participate. In the promotions for the Capitol Sessions concert, the participating roster started to look much like what a Midnight Ramble event might look like today.

Naturally, the Capitol Sessions concert could not include songs by all the musicians who ever played the Capitol Theatre. This concert also would not recall the diverse catalogues performed there by Pink Floyd, David Bowie, Judas Priest, the Ramones, Parliament-Funkadelic, Skrillex, B.B. King, Yes, Foreigner, Herbie Hancock, Ruben Blades, Dawes, Alice Cooper, the Rascals, Al Green, Elvis Costello, and so many others. Instead, the concert circled mostly around a Woodstock vibe and the majority of the songs hailed back to about 1970.

The Capitol Sessions concert began with Larry Campbell and his wife, Teresa Williams, singing a song that might have dated back to around the time of the original opening of the Capitol Theatre. “Samson and Delilah” is a traditional song of uncertain origin, popularized by the Grateful Dead, who learned it from Rev. Gary Davis. Under an earlier title, however, the song “If I Had My Way I’d Tear the Building Down,” also known as “Oh Lord If I Had My Way,” was recorded by Blind Willie Johnson in 1927. No one mentioned this link, however.

Regrettably, the production of the Capitol Sessions concert lacked a pronounced sense of history. The producers provided no visual display of the storied musicians who had performed at the theatre in years past. No booklet with a history of the theater was distributed. As the songs were performed, none of the musicians offered a context, saying who originally performed the song there or when it was played. For a concert that was intended to honor the history of theater, these were glaring omissions.

The Chambers Brothers headlined the very first rock concert at the Capitol Theater on February 6, 1970. That band was represented when Ms. Lisa Fischer sang “Time Has Come Today.” The connection was not elaborated to the audience, however.

Other high points in history were completely overlooked. Legend has it that Janis Joplin introduced the song “Mercedes Benz” to the world from that stage, but the song was not performed. Bob Dylan was the first musician to headline the theater when it reopened in 2012, but no song from that set was played. Campbell suggested at the end of the night that this concert would become the first of an annual series, so there will be future opportunities to make the events a clearer tribute to the theater’s legacy.

The Capitol Sessions concert instead became an opportunity for music fans to enjoy a certain coterie of musicians working together as an all-star cover band playing a classic rock jukebox. Jackson Browne and Jorma Kaukonen (Jefferson Airplane, Hot Tuna) were listed as the headliners, but several lesser-known musicians spent more time on stage than the headliners did.

FOR THE FULL REVIEW AND ALL PHOTOGRAPHS FROM THE CAPITOL SESSIONS BY EVERYNIGHT CHARLEY FOR THE MANHATTAN BEAT, CLICK HERE!