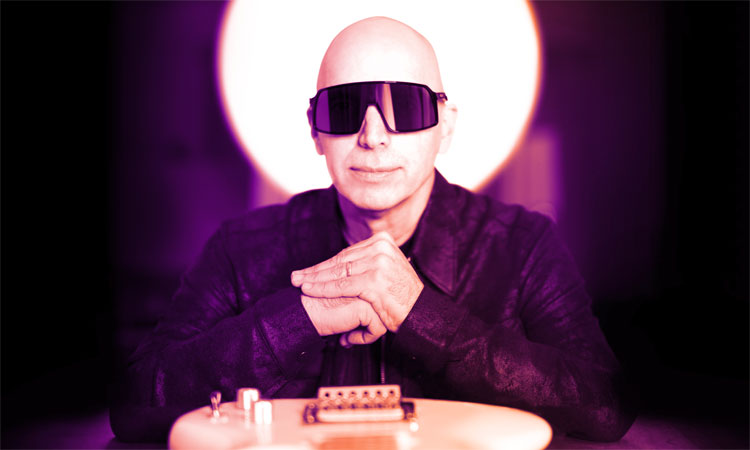 A New Wave of Art From Joe Satriani

Few people have the connections that Joe Satriani does. The famed guitarist has a musical inner circle ranging from Mick Jagger and Kirk Hammett to David Bryson and Alice Cooper, but he is still taking his art to the next, expansive level – this time with genuine sketches, painted portraits, and graphic designs.

Joe Satriani is celebrated as the world’s most commercially successful solo guitar player, with multiplatinum album sales and sold-out arena shows around the world. He will release his 18th album, The Elephants of Mars, on April 8 – but before that, he has another big event: his solo fine art exhibit at Wentworth Galleries in Short Hills, New Jersey on March 12. His artwork will be for sale, and Satriani himself will be in attendance to meet his fans.

Calling from California, Satriani tells The Aquarian that expanding his creativity into painting seemed like a natural progression for him. “I grew up in a family that had quite a few artists,” he says. “My oldest sisters wound up getting fine art degrees and went on to become professional artists. When I met the woman who was going to be my wife, she was getting her degree in graphic arts in San Francisco. Then later on, our son wound up getting a degree in art and film. So it seems like I was the late bloomer!”

Even though Satriani found success nearly four decades ago with his guitar playing, he says he was always drawing. Eventually, he started overlapping it with his music career. “I slowly got my sketches turned into art for CD packages, tour T-shirts, guitar straps, picks, and things like that,” he explains. “Then, in 2013, I put out a book [Joe’s Art] that was my first foray into taking these sketches and manipulating them into digital images.

“Then I thought, ‘I want to understand how to do it on canvas’ – that was one thing I’d never really tried to do,” Satriani continues. “This goes back maybe six, eight years, something like that. My wife taught me everything I needed to know that I was missing in my art education about the simple things: how to blend colors, how to treat the canvas, what you do with the brush when you’re done with it.”

Initially, Satriani’s paintings focused on “really strange-looking portraits” and what he loved to do when he was sketching. “I slowly started to build up to about a hundred canvases of all different sizes of these characters. It felt like a fun, creative outlet.”

He kept expanding his scope, working on mixed-media pieces until his work finally caught the eye of the Wentworth Galleries owner, who offered to put on full-scale exhibitions of the artwork. The first event took place a few weeks ago at the Wentworth space in Miami.

“What really blew me away was when we walked into the gallery for the first time and saw my paintings on the wall,” Satriani says of that show. “It was just like hearing your song on the radio for the first time. It was that profound. I just thought, ‘Wow, I’m so lucky! This is crazy! How could this be happening?’ It was such a wonderful moment, that some crazy little idea that was inside of you ended up on the canvas, and now it’s on the wall, and someone’s going to buy it and take it home and they’re going to see it every day. It’s just great.”

For the exhibit in Short Hills, Satriani will present works on canvas and, appropriately enough for a guitar virtuoso, some hand-painted guitars – which he says turned out to be more difficult than he’d anticipated. “During the pandemic, there were supply chain issues, and the only guitars that [guitar-makers] Ibanez could find for me were guitars that were already ready for retail – so when they arrived at my house, I had to take them apart and sand them down, which felt like a sacrilegious of some kind, being a longtime guitarist!” he admits with a laugh.

Still, he says that experience “was kind of interesting” as it was something he had never tried to do. “I’d actually never taken a guitar completely apart, down to every last screw. I’d sand off the beautiful paint job and hope that I would be able to paint something back on there that was good. In the end, it turned out great.”

Three weeks after his Short Hills art show, Satriani will release The Elephants of Mars. The concept for this release, his 18th full-length, is “about Earth scientists terraforming Mars in the future, and unbeknownst to them, they created a race of giant, sentient elephants, and they get together with the colonists who are led by a guitar-playing revolutionary who decides to fight the evil corporations of Earth from mining Mars back into a desert planet. They want to keep the newly terraformed Mars as a beautiful garden planet.”

With a laugh, Satriani admits this is “a crazy idea,” but he’s not worried about how it’ll be received. “You can’t decide what people are going to like or not like, so just forget about it and just express yourself and put it out there. If they like it, great. If they don’t, just move on. Don’t take it personally.”

Satriani applies this same untroubled attitude to his fine art, as well. “Every time I start to put the brush on the canvas, I’m not really sure what’s going to happen, but I know that doing it is the most important thing. I think in the art world, as with music, the only reward is that you keep yourself employed at trying, because public accolades don’t mean much, on an artistic level. I suppose on an economic level it’s really important that artists and musicians do good business so they can fund the next thing that they’re doing, so I’m not discounting that, but it doesn’t do much for inspiration. I still think living on the edge is the most important thing – not knowing if what you’re doing is really going to work out, but you’re trying to reach for it anyway.”

FOR MORE INFORMATION ON HOW TO ATTEND JOE SATRIANI’S ART SHOW IN SHORT HILLS ON MARCH 12, CLICK HERE! MAKE SURE TO CHECK OUT THE ELEPHANTS OF MARS ON APRIL 8!