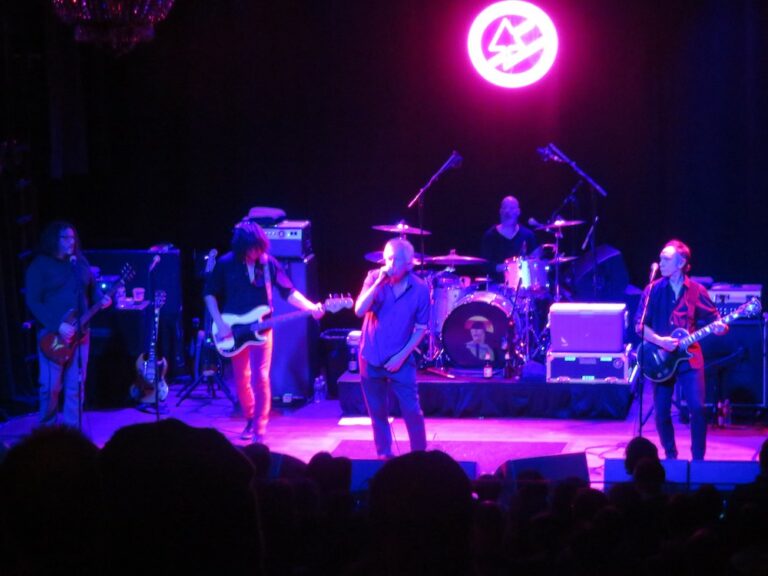 Since forming Guided by Voices in 1983 in Dayton, Ohio, vocalist and only constant member Robert Pollard has announced the band’s demise several times. This announcement often has been followed several months later by an announcement of a new album. Guided by Voices has released 35 albums, many of them limited editions, along with EPs, Pollard solo output, and other releases. Even while much of the music world closed shop, Guided by Voices released five albums during the pandemic, the most recent, Crystal Nuns Cathedral, on March 4, just four months after the release of It’s Not Them. It Couldn’t Be Them. It Is Them!

As many as 50 musicians have claimed membership in Guided by Voices over the decades. The present configuration has been intact since 2016. It consists of Pollard, guitarists Doug Gillard and Bobby Bare Jr., bassist Mark Shue, and drummer Kevin March.

Throughout the evening, the lighting remained static. With no spotlight or change of lighting, everything on stage looked blue all night. One red light in the center sometimes gave Pollard a glowing outline. For most of the show, all the audience saw were silhouettes of Pollard and his band of animated musicians.

A party spirit poured from the stage into the audience. The band had a cooler on stage, and the musicians, especially Pollard, regularly reached for a refresher. As such, two-and-a-half hours into the show, the pause between the main set and nine-song encore was probably more of a bio-break for the musicians than anything else.

The evening’s marathon repertoire consisted largely of GBV’s signature pummeling power pop. Songs highlighted loud power chords and slick guitar leads. Normally one does not want the musicians to overpower the singer, but tonight this would have been justice. Pollard’s vocal range repeatedly fell flat, with too many key notes proving to be unreachable. Three hours of fair-to-poor singing could induce winces and cringes over and over again; the concert was more enjoyable by grooving instead on the hook-laden melodies, bouncing to the strong rhythms, raising a rock fist in the air, and joining the band’s rock and roll party. Forgiving the failed vocals, the audience enjoyed the mix of new songs with better-known songs, including “Everybody Thinks I’m a Raincloud (When I’m Not Looking),” “Cut-Out Witch,” “I Am a Scientist,” “Game of Pricks,” “Shocker in Gloomtown,” “Hot Freaks,” “Teenage FBI,” and “Glad Girls.”