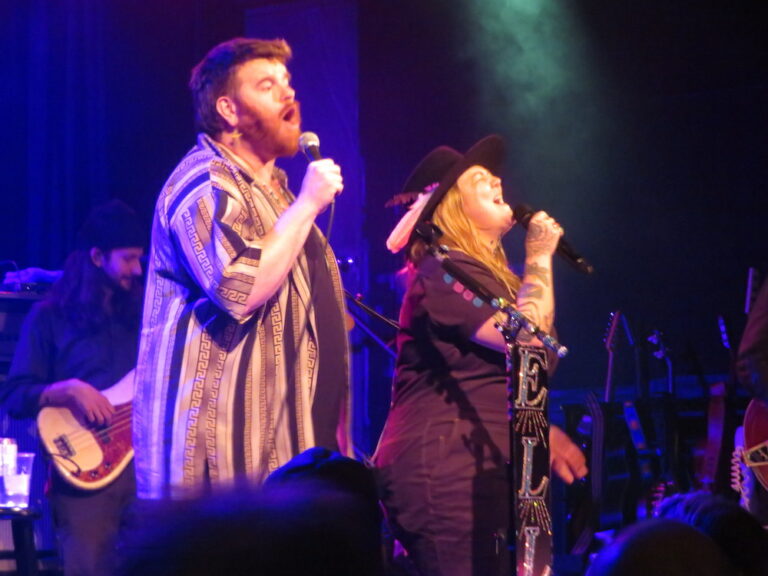 Elle King and the Brethren at the Music Hall of Williamsburg / March 6, 2022

Six months ago, Tanner Elle Schneider, known professionally as Elle King, had her first child, a boy named Lucky. This new maternity adventure has not turned her away from being a bad-ass country singer-songwriter. Even while pregnant a year ago, she had a moderate radio hit with Miranda Lambert, a duet entitled “Drunk (and I Don’t Wanna Go Home).” That theme was not what one might expect a mother-to-be to be singing.

As a youth, King launched a show business career as the Cookie Girl in the 1999 movie Deuce Bigalow: Male Gigolo with her dad, former Saturday Night Live cast member Rob Schneider. In 2005, at age 16, she started playing in New York clubs and later began busking in public spaces. She started releasing product in 2012, first a single, then a four-song EP, and ultimately two albums. Her songs have landed on soundtracks. She increasingly gained respect in the country music world and recorded songs with Dierks Bentley, Miranda Lambert, Wanda Jackson and others. She has won awards in the country field and has been nominated for prestigious rock awards. The trajectory for her career seems to be pointing up.

Born in Los Angeles, California, King spent a good part of her adulthood living in Bushwick, Brooklyn. Her Drunk and I Don’t Wanna Go Home Tour with her band, the Brethren, presented a homecoming show, moved from Brooklyn Steel to the more intimate Music Hall of Williamsburg. She was welcomed by former co-workers and people who knew her from riding the L train, but more importantly, as she is getting better known, her audience included people who have come to know her through her music.

The Drunk and I Don’t Wanna Go Home Tour was not built around promoting new music product because King does not have a lot to sell. Many of the songs she and her band (guitarist Joey McClellan, keyboardist Dave Sherman, bassist Paul DeVincenzo, drummer Dave Scalia) performed have been in her live set for some time, yet remain unrecorded. King’s most recent album was released in 2018, her most recent EP was in 2020, and her only musical output in 2021 was the single “Drunk (and I Don’t Wanna Go Home)” and a cover of the holiday song “Please Come Home for Christmas.” Her baby boy arrived between those last two releases.

At the Music Hall of Williamsburg, King played banjo and acoustic guitar on many songs. She sang strongly and confidently, with her no-filter lyrics firmly maintaining her reputation as a bad-ass. Onstage, she demonstrated a highly-developed rock star swagger. Several times between songs, she endeared herself with the locals by sharing a few of her Brooklyn memories.

The key to King’s performance was the way she and her band married pop, rock, and country. The compositions had a country flavor, while the axis remained on their radio-friendly pop arrangements. Songs had muscular hooks and well-constructed sing-along choruses. This was not your daddy’s style of country music; this mix seemed to be where country music is centered in the new roaring 20s. Elle King’s performance showed that she is on the horizon, ready to blaze trails in country pop, with her newborn in tow.