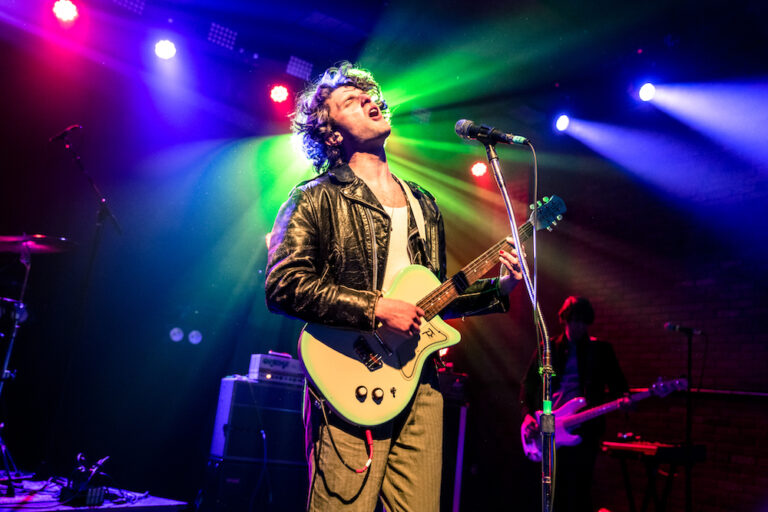 Joe P of Sparta, New Jersey made an artistic and stylistic appearance at Asbury Park’s House of Independents on March 4. The persistence and intention behind the show was clear from the start, having been postponed prior to selling out the venue. The performance was electrifying and cinematic, twisting and turning from one song to the next in a balanced yet melancholy form that worked favorably with minimalistic lighting and the venue’s cozy, brick wall backdrop. The evening was intimate and noir-ish, between Joe’s interactions with the zealous audience and sweet moments when he described definable, inspiring memories he had with loved ones who were present in the audience.

When the stage was set, the ensemble opened with the moving and swelling interlude “Yellow Lights,” in which Joe P was expressive in his honest lyrics, just bold and stark were him and the microphone. Joe Parella, the former frontman of Jersey alternative rock band Deal Casino, is known for being raw and confessional onstage while remaining pitch-perfect; always resembling his recorded material to a tee.

I had seen him make an impromptu appearance at Sad Summer Fest in 2021 as a solo artist, and having been a fan of Deal Casino, I recognized his unique vocal style immediately. I wanted more, so when this Asbury appearance was announced, I knew I had to attend.

Following the first number was “Baby Teeth,” a Deal Casino song that Joe re-recorded alongside Mothica for his solo project. It was featured on his record Emily Can’t Sing, which made my Top Ten Records of 2021. This song really came to life live, sounding as if it were a hybrid between the DC and Joe P solo renditions. Joe paused to say hello to the crowd, thanking everyone for attending and even exceeding the original amount of attendees than the original show date. At one point, fans tossed Joe some fuzzy boas, of which he found very fashionable and paired well with his leather jacket, so he put it on.

The band played “Leaves,” the opening track of Joe’s debut album, which is a snarky, driving, rocking tune. In this moment, the drums really shined as the crowd bounced and danced along. Over the course of the night, they played a handful of Deal Casino songs, including “Just a Cow” and “Color TV.” Transitioning from “Leaves,” Joe’s single “Middle Class Dream” (a snippet of which was featured on his Instagram recently), swept over the room with an ambient flow to it and an ear-pleasing bass line. He played around with the intro for a moment, with honest and self aware lyrics such as “find shelter, take cover from me.”

The show significantly took off after that, accelerating with “Crown Vic (Black Cloud).” Joe recalled his grand ideas for the music video, which they did end up producing – on a very limited budget. “So we got like, 100 of these costumes on Amazon, the costume that guy is wearing,” pointing out an audience member donning the attire, “then we returned the costumes after we shot the video.” My appreciation for Joe’s music stems from my love for the New Jersey music scene. Not only is Joe a Jersey native, but he incorporates little love letters to our home state in his lyrics. “Driving round New Jersey in a used crown vic, chasing Goldilocks up and down Route 6.”

The band walked offstage and it was just the indie rock singer-songwriter and a bell toned guitar, even further professing his love for NJ with a faithful cover of “I’m On Fire” by Bruce Springsteen. This cover brought me back to another Asbury Park show years ago, when Andrew McMahon played his own cover of the Springsteen hit at The Stone Pony. Addressing something weighing heavily on all of our minds at this point in time, he nailed an awe inspiring guitar rendition of “Hallelujah” by Jeff Buckley, which he dedicated to the people of Ukraine. The crowd sang along intently, providing a cathartic and unified moment for everyone in attendance. Joe also sang a new song during his solo set, which he vividly described as the feeling of Sunday mornings, a weekend coming to a close, and heading back home after time apart from a loved one.

When the band came back, filling the stage around Joe P, they started with the somber yet explosive ballad “Going to California.” Joe has a commanding stage presence, both while singing to the audience and ripping across the stage with his guitar. The concert here at House of Independents was tied up in a bow with a high energy performance of “Fighting in the Car” and a previously alluded to alternate remix of his hit song “Off My Mind.” Subtle new nuances were added to each and every song, mixing things up and making for an exhilarating night out on Asbury Park.