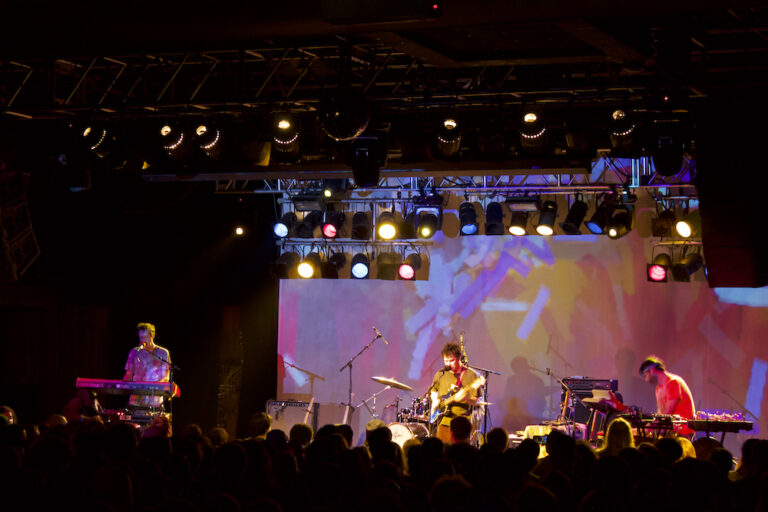 With longer, warmer days recently, it’s almost as if spring came a little early to our home state of New Jersey – and what better way to kick off the unofficial start of spring than with some indie?

Opening for them on March 16, 2022 was L’Rain, a quintet from New York City with vocalist and guitarist Taja Cheek at the helm alongside a drummer, a bassist, a guitarist, and a saxophonist. Their 45-minute set included droning melodies that intensified and looped, while L’Rain gave an avant-garde vocal performance that included whispering, screaming, and surprisingly harmonious sounds. In black leather jacket and matching platforms, she sang, picking up a guitar and a bass now and again while turning knobs and hitting pedals to fill out a song.

At one point, their drummer struck his drums with mallets that thundered throughout the club. Their sampler/saxophonist had several lofi sax solos that joined the songs at pristine moments. I liked their artfulness and genre-merging, but all their electronics onstage provided a double-edged sword because of some technical issues, such as a malfunctioning loop pedal and a microphone that cut in and out. Still, they were met with thunderous applause when they finished their set.

The four multi-instrumentalists of Animal Collective took the stage afterward at 9:15 p.m. and began their set with “Prester John,” a track from their new album Time Skiffs. Following that, they played “In the Flowers” and “We Go Back” with psychedelic projections as the backdrop. Around the fourth song, Deakin had technical difficulties, as well – this time with his electronic booth. A roadie came out and fixed it momentarily, only for it to require duct tape and the band to restart the song. Chants of “Deakin” were heard to boost his morale as he continued to provide stunning indie rock soundscapes.

Geologist is named for the headlamp he wears so he can see all of his electronics on the four plus tables surrounding him. It makes sense because he has sequencers, samplers, vocoders, minidiscs, a gong, and more in his corner, swallowing him with sound that reverberates into the crowd. He conducts all of those instruments and sound machines with such focus that it worthy of note.

A third of their 15song-long setlist came from Time Skiffs, including the tracks “Cherokee,” “Strung with Everything,” “Royal and Desire,” and aforementioned “We Go Back.” The rest were from older releases and their always growing back catalog.

Animal Collective is an interesting band to watch because all of the musicians play a game of musical chairs, but instead of chairs, they switch instruments. One song, Avey Tare will play bass, then on another, Deakin will. Or Panda Bear will switch from drums to play guitar. Or Avey Tare will put down the guitar and play a sequencer with Deakin and Geologist jumping on their respective sequencers. All the while, this band is keen on delivering unusual sonic textures that excite and bewilder. They played for two hours, but it felt like it could have continued long into the night; pushing the boundaries of pop and indie artistry even further into the ether.