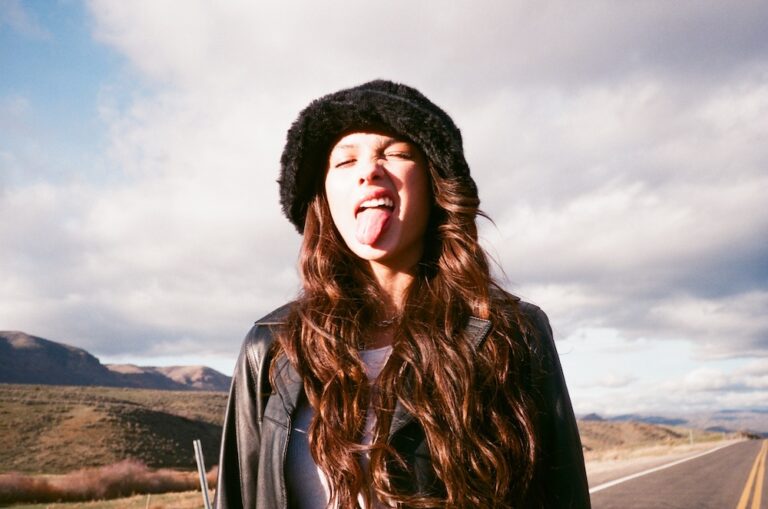 Sour feelings mixed in with an affinity for Taylor Swift songs may have helped put Olivia Rodrigo on the map, but it is her own sweetness – her down-to-earth nature and musical mind (of which we see constantly bubbling over with creativity in this new documentary) – that reminds us of why she is staying put.

Singer-songwriter Olivia Rodrigo became an overnight sensation when her debut single, “driver’s license” reached viral status on TikTok and almost instantly went quadruple-platinum in the beginning of 2021. It’s been just over a year and Rodrigo is now bringing fans along on an autobiographical journey – the exact road trip she took multiple times while writing the lyrics to her Grammy-nominated album, SOUR. It was while she was a passenger on these car rides from her home in Salt Lake City to her job playing Nini on the Disney+ original High School Musical: The Musical: The Series in Los Angeles that she wrote lyrics to songs that would become Gen Z anthems, chart-topping hits, and the soundtrack to everyone’s first heartbreak (past, present, or future). Now that she has her own driver’s license, the pop sensation piles all of us into her vintage Ford Bronco to talk about the raw emotions she experienced as a 17-year-old budding songwriter, and, appropriately, makes 11 stops along the way to give fans brand new, unique performances of each song off of her first full-legnth album.

Two major factors of SOUR‘s success were the vulnerability and relatability that Olivia Rodrigo unleashes into her lyrics. The first performance of the film, “Happier,” is filmed sitting on the floor of her empty childhood bedroom while she slowly plays the keyboard and sings, “I hope you’re happy, but don’t be happier.” The pain of a teenage heartbreak, while coping with an ex moving on, doesn’t get any more raw than this demonstration. Writing these songs were a form of catharsis and self-expression, which we learn first-hand in this documentary, but it is the act of breathing new life into them that turns it all into tangible, life-changing art. Rodrigo slows down several of her performances for the film, including an acoustic take on “1 step forward, 3 steps back” that adds to the heart-wrenching basis of it as she sits in the back of the car while it drives down an empty desert highway.

One of Rodrigo’s biggest and most immediate hits off of SOUR in 2021 was “good 4 u,” a pop punk hit loosely inspired by Paramore’s “Misery Business.” The song had a Jennifer’s Body-themed music video and captured the teen angst in music that has not been successfully reproduced since the days that the aforementioned Paramore and Avril Lavigne were first climbing up the charts. A single that was fun and edgy and a summer smash didn’t need the cinematic driving home 2 u treatment, but Rodrigo still went ahead with it. She takes the stage in the middle of California’s Red Rock Canyon State Park, transforming the power pop hit into a somber piece with a string orchestra. This is a reminder that in this film, vulnerability is the foundation every Olivia Rodrigo song, and for her, even the most uptempo tracks begin as intimately as the tearjerkers.

On top of delivering these really cool new versions of her hits in unorthodox locations – “Deja Vu” in an empty drive-in theater and “Traitor” at a gas station – Rodrigo gets real about said emotional experiences that went into the writing and releasing of her music. The success of “driver’s license” came with controversy and speculation behind the subjects of the song, which caused drama that she did not want. Then her sophomore single, “Deja Vu,” being a very different follow-up, concerned the newly crowned iHeart Radio Female Artist of the Year. She was proud of the song, but she couldn’t help but worry that she would lose the fan base she was building – to the point where she even tried having the release of the single pulled. Luckily for us and her millions of fans, the team of producers backing her believed in the track, releasing it anyway before watching it become another relatable hit.

Available to stream today, driving home 2 u is a beautiful collection of performances featuring the honest confessions of a teenager dealing with heartbreak, the end to friendships, and the pressures of living in a world dominated by social media. Directed by Stacey Lee and produced by Interscope Films and Supper Club, the film immerses you in all things Sour – before, during, and after its cosmic, record-breaking release into the world. Olivia Rodrigo expertly tells her story through never-before-seen footage, unparalleled performances, and intimate conversations; bringing us all the way from the suburbs of Salt Lake to the beaches of Malibu in this masterfully crafted documentary that is on Disney+ now.

CLICK HERE TO LEARN MORE ABOUT, AND WATCH, DRIVING HOME 2 U! TUNE INTO OLIVIA RODRIGO’S PERFORMANCE AT THE GRAMMY AWARDS ON CBS SUNDAY, APRIL 3!