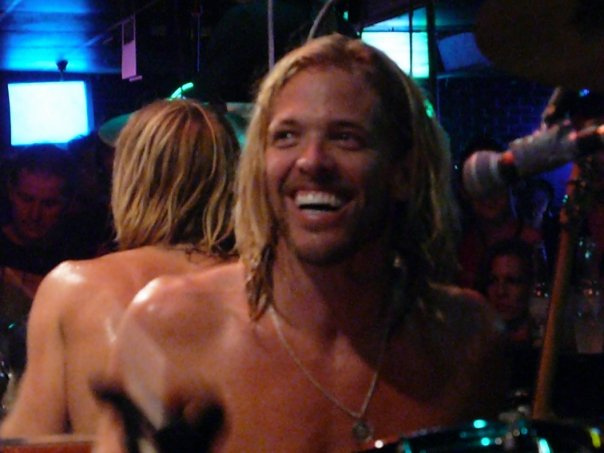 Every single time Taylor Hawkins came out from behind his kit to cover “Somebody to Love” for a screaming crowd of fellow rockers and adoring fans, he had no idea how it would solidify his very own place in the world as somebody everyone could love.

A lot of drummers wear tank tops and shorts, loose baggy clothing that allows them room to slam their sticks onto the head of more than a handful of drums. Mötley Crüe’s Tommy Lee and Blink-182’s Travis Barker may come to mind when picturing this look. Even Lars Ulrich went the ‘least amount of clothing’ route back in the day while behind the kit with Metallica. Few musicians captured the essence of this style, though, like one Taylor Hawkins.

The Alanis Morissette drummer turned Foo Fighters staple and all around rockstar was pretty much synonymous with ripped muscle tees, board shorts, and shaggy blonde hair. So much so that had he not been one of the most notable modern rockers, it wouldn’t be a surprise if you mistook him for a surfer just a few too many miles away from the shores of Malibu. He took this fashion and ran with it throughout every iteration of his always growing career. World tours, White House visits, interviews, days-off… you knew what this guy was going to look like (in the best way). Still, that notoriety of being a famous musician never stopped Taylor Hawkins from dressing like Taylor Hawkins, acting like Taylor Hawkins, and being the Taylor Hawkins he always was – and will always be known as.

This is a man who is engrained in the history of music, weaving himself into the foundation of what makes art so important and so transcendent. (It also adds to the tragedy of this untimely loss.) Conscious with the releases he was part of, the musicians he grew close to, and generous with his time, Taylor Hawkins had his hand in a lot more than a casual fan may realize. However, he was able to come across as one of the most laidback humans to ever grace the earth. Maybe it was his own casual nature and borderline beach-y outward perception. Maybe it was his understated warmth and class clown persona, at least in comparison to Dave Grohl, who – as silly and f-bomb-slinging as he is – is seen doing all things, at all places, at all times.

“Tearing through the room like an F5 tornado of hyperactive joy was Taylor Hawkins, my brother from another mother, my best friend, a man from whom I would take a bullet. Upon first meeting, our bond was immediate, and we grew closer with every day, every song, every note we played together. “

“Twin flames” as Grohl would go on to call them in his 2021 memoir, were who they were to each other, but to all, it was clear that both musicians had an evident a drive and an eye-catching coolness that many continue to try and emulate. Taylor Hawkins was not a sidekick or a wingman to Dave Grohl. He was a best friend and a brother with similarities galore, but the somehow chill and boisterous Foos’ drummer stood strong as his own rock and roll force to be reckoned with.

His critically-acclaimed cover band, Chevy Metal, put him on the radar of Alice Cooper, John Stamos, and Skid Row’s Sebastian Bach. His solo band, Taylor Hawkins and the Coattail Riders, let him live out his dream of being the Robin Zander of his Cheap Trick or the Freddie Mercury of his Queen. (Two classic bands that would become friends of his; peers that paid respect to him. Just this morning Roger Taylor dedicated his OBE award and honor to Hawkins, which was given to him at Windsor Castle from the Prince of Wales.) His time with Foo Fighters lasted almost 25 years and brought his light and his laugh into the homes and hearts of fans around the globe. Even the most flippant music lover or fan of any of these projects knew his worth, but also got to know his heart, which was always mesmerizingly filled with music…. And some 12 or so Grammy Awards, which plays into how he will be honored through a special tribute from the Recording Academy at this weekend’s ceremony.

When you are rooted so deeply and so earnestly in something like your art, who needs to take the time to dress up? Taylor Hawkins’ tank top and board shorts combo were never a statement, but looking back at his simply revolutionary, personable, and memorable 50 years of life, you can see how he used his time how he wanted to – in a way that was immensely fun, headbanging-ly musical, and genuinely comfortable for him to thrive within.

There will never be enough words to explain how heartbreaking a sudden, shocking loss can be. We will not try to summarize the feelings the world has at this moment and that Taylor’s own inner circle is burdened with. What we will do is pay tribute to his evocative, passionate skillset that many people were blessed to experience over the course of his truly rock and roll career. We will remember his laugh, his sarcasm, his friendships and mentorships, his heart, and his look, which will forever make us smile just as much him as his music did… and will continue to for years to come. Rest in peace, Taylor Hawkins.