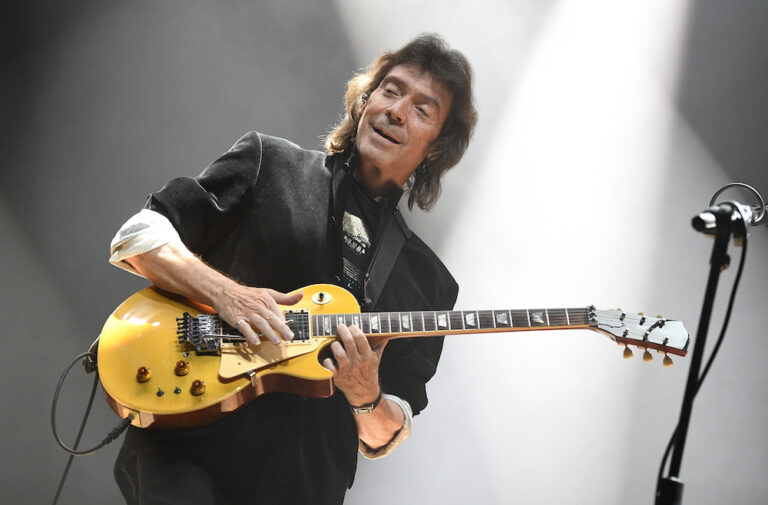 Although just a quick catch-up with an old friend, talking with one of the most prolific guitarists from the last 50 years always proves to be fun and insightful.

Steve Hackett left English prog-rockers Genesis in 1975 – if you only know them from the 1980s onward, start digging – and has released an astounding 27 solo albums since his departure that include rock, classical, and blues-centric discs. Last year he dropped two: the all-instrumental, entirely acoustic Under a Mediterranean Sky and the electric Surrender of Silence. On both albums Hackett paints atmospheric soundscapes through fluid fretwork and uses the two-hand tapping technique that he created while in Genesis, beating Eddie Van Halen to the punch by eight years.

Through all his solo success, Steve Hackett has always held a soft spot for his Genesis days (1970-1975 and six studio albums), even if he did walk away from the band frustrated that his creative ideas went unacknowledged. In recent years he’s been playing Genesis’ early albums in their entirety. This year Hackett is breathing new life into Seconds Out, the band’s 1977 double-live album that also served as Hackett’s swansong. The tour comes to the Beacon Theatre in New York on April 3 and the Scottish Rite Auditorium in Collingswood, New Jersey from April 7 to April 9. In addition to Seconds Out, he’ll be playing a bevy of solo material.

The amiable six-stringer recently phoned us from across the pond.

Why play “Seconds Out” now?

We were doing the whole of Selling England by the Pound the last time, and halfway through the tour, everything closed around us with COVID. We chose Seconds Out because it was a very successful album and so many fans love it. It includes basically the most popular songs up to that time. I felt the mix on the original album was kind of questionable and now I can produce the show much better on the road. It does sound brilliant, I have to say.

What do you remember about making the album?

We took songs from various shows in Paris. We recorded a lot of shows in those days but never felt on top of it to release them. This one went very well. There are no overdubs or fix-ups. It’s a very honest live album for the time. The crowd used to go nuts. Paris was a magical place to play and so are the Beacon Theatre and Scottish Rite. The sound in those theaters is very alive.

Will you be playing material from your two new solo albums?

I’ll be playing songs from Surrender of Silence.  Under a Mediterranean Sky is acoustic and doesn’t quite work as well. I love revisiting and playing the new stuff, as well. I think that makes a difference – mixing in new songs – so the show doesn’t seem out of date. The combination of songs have legs and keep going, so they take flight. So much of early Genesis and my material have done that.

What are the most challenging songs from Seconds Out to play in a live setting?

“Cinema Show” is the most challenging. “Dance on a Volcano” and “Los Endos” have their challenges, as well; they go through so many changes. They have to be done perfectly.

What are your future plans beyond this tour?

I love doing music. I’m already working on a new studio album and it’s going very well but there’s lots of rewriting and rerecording to be done in my world. I’m keeping the museum doors open for the exhibits that they hold.

FOR INFORMATION ON HOW YOU CAN CATCH SECONDS OUT LIVE AND STEVE HACKETT IN BOTH NYC AND NJ, VISIT HIS WEBSITE!