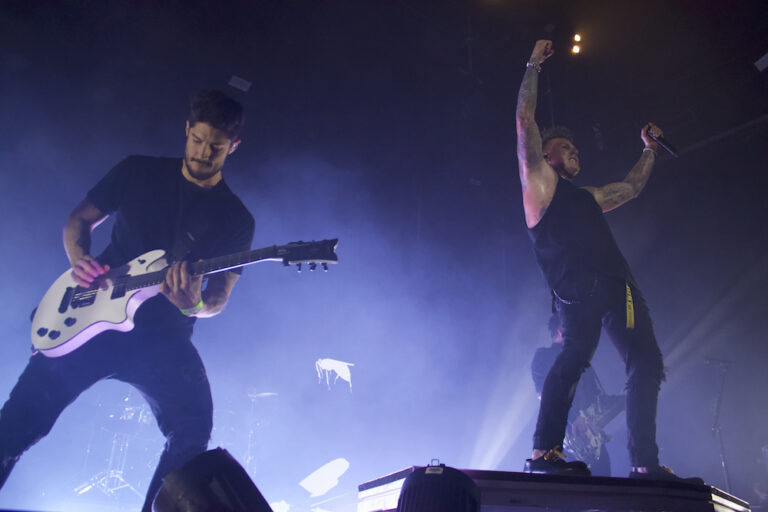 Papa Roach Bring the Noise On the Kill the Noise Tour

It was a sold out show for Papa Roach when they rolled through Montclair and stopped at the Wellmont Theater. The line to get in wrapped around the block, then continued on another block, and turned yet another corner.

The Kill the Noise Tour, featuring Bad Wolves and Hollywood Undead as support, is coming to a close. But they had to stop by New Jersey for a rowdy show. The crowd filtered in and the house was nearly full for Bad Wolves who took the stage at 7:00 p.m. Their set was noteworthy because this is the first tour with new vocalist Daniel Laskiewicz, former guitarist for The Acacia Strain, following former lead singer Tommy Vext’s departure. They played eight songs, but the highlight was their cover of The Cranberries’ “Zombie,” which saw a flood of flashlights and lighters in the sky. Following their final track, “I’ll be There,” the band gave drumsticks, setlists, and guitar picks to the crowd.

Up next, rap rock heroes Hollywood Undead set their stage with platforms to stand over the crowd and plastic palm tree. Ah, just like Hollywood. They appeared on stage at 8:00 p.m. sans masks and struck up “Chaos,” a single dropped earlier this month. The five MCs of Charlie Scene, J-Dog, Danny, Funny Man, and Johnny 3 Tears jump around the stage with exhilaration throughout their hour-long set. It’s dizzying to watch, but a thrill to experience. For their fifth number, “Comin’ in Hot,” they asked the crowd if there were any guitarists in the crowd, and a young man in the front few rows named Anthony was brought on stage, was lent a Les Paul, and played the entire song next to the band. The audience loved him!

Just before their notorious acoustic track “Bullet,” Charlie Scene played two verses of Johnny Cash’s “Folsom Prison Blues;” swapping out the “shot a man in Reno” lyric with Jersey. “Riot” followed that song with a roadie playing tambourine. The concluding two songs of “Everywhere I Go” and “Undead” brought me back to my teenage years, when I had Hollywood Undead in constant rotation. It’s good to see they’re still beloved by fans (and myself) after all this time.

At 9:30 p.m, Papa Roach emerged onstage and kicked off with a new single “Kill the Noise” off their upcoming album of the same name. The quartet of guitarist Jerry Horton, bassist Tobin Esperence, drummer Tony Palermo, and vocalist Jacoby Shaddix-clad in split red and black leather jacket- started with a bang and continued through setlist staples including “Getting Away with Murder” and “Between Angels and Insects” before 2017’s “Help.” Following that, Jacoby asked the audience to bounce with him for the next one – a short rendition of “Song 2” by Blur. Prior to “Blood Brothers,” Jacoby again asked the audience for participation by splitting the crowd for the upcoming Wall of Death.

Halfway through their set, their cameraman was called to the stage for a Fan Cam segment, while Tobin played the bassline to Anderson .Paak’s “Come Down.” A few songs later, Jacoby addressed the crowd, “Papa Roach shows are safe spaces. We have fostered a community with our fans. All are welcome. Music gave me a community when I was young, so this is for you all. With that, “Scars” started with an innate chorus from the crowd. Their final track before their encore was “…To Be Loved,” the former theme song to WWE’s Monday Night Raw with a smidge of the Ramones’ “Blitzkrieg Bop” played in the intro.

A Papa-Roach-DVD-menu-style square popped up after that for a few moments before they reappeared and jumped straight into “Last Resort.” And the final surprise they pulled: for their new “Swerve,” originally featuring Sueco, Funny Man and Charlie Scene assisted them for Sueco’s part. There is another character onstage with them but that one will remain a secret.

Papa Roach and Hollywood Undead were two bands I explored as a budding punk; trying to find my place in a world I didn’t understand, and didn’t understand me. I knew all the words to their older songs. It felt like I was scrolling through my blue iPod Nano on my walk to school, which I still have. I am now even more grateful for the hours spent listening to their music in middle and high school and the wisdom they dispensed.