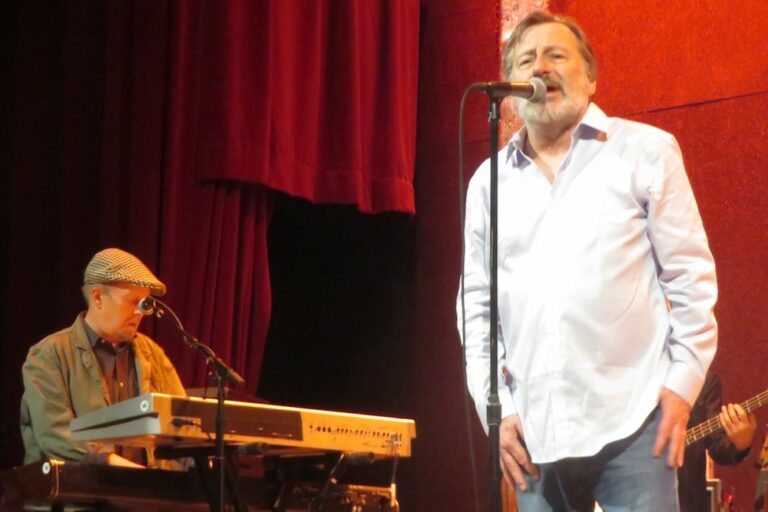 In the mid 1970s, the tremendous success of Bruce Springsteen & the E Street Band brought the music world’s attention to Asbury Park, New Jersey. Southside Johnny & the Asbury Jukes greatly benefitted. The Jukes had been  drawing strong crowds locally, but until Springsteen broke the barrier, Jersey bands seldom ventured past the state line. Southside Johnny & the Asbury Jukes was making good music and suddenly the universe beyond the Garden State seemed interested. The Jukes never achieved anywhere near the level of success that Springsteen enjoyed, instead developing a smaller yet loyal core audience of its own that has sustained the band for five decades.

Southside Johnny & the Asbury Jukes continue to make good music almost 50 years after first forming. The rocking rhythm & blues that gave the band its identity stands out for its longevity because it is timeless music. Even with nearly 100 musicians having passed through the ranks, the band’s sound is soothingly familiar and registers easily with listeners without challenging the audience’s expectations.

At City Winery NYC, Johnny Lyons started the show singing quite hoarsely and with a noticeably limited range. It seemed like the performance might be in danger. It took a few songs for his voice to warm up, but then he did well. His signature vocals always favor the gritty side anyway.

Although Lyons was usually the center of attention, the musicians were integral to the development of the arrangements. Lyons’ soulfully sung verses and chorus were prefaces that led to the musicians wailing on their instruments. The guitarist, keyboardist and trio of horn players frequently allotted generous time to sparkling improvisational contributions. The ensemble building the arrangements as a team gave the songs a captivating vibrancy.

A few songs were extended entirely too long, however, including the Jukes’ cover of the Left Banke’s “Walk Away Renee.” Playing a two-hour set, the band maintained a structure but not too tightly. With no new album to promote (the band’s most recent studio album was Soultime! in 2015), the selections included old favorites, deep cuts and covers. The highlights were when the Jukes mined the Asbury Park sound with Springsteen’s “The Fever” and “Talk to Me,” Steven Van Zandt’s “Love on the Wrong Side of Town” and “I Don’t Want to Go Home,” and “Trapped Again,” a song co-written by Lyons, Springsteen, and Van Zandt. Those five songs were written for and recorded by the Jukes in the late 1970s and still raise the temperature of the room when played live.

Generally speaking, fans know what they will be getting when attending a Southside Johnny & the Asbury Jukes concert. The performance will be solid, and the vibe will blossom into a rock and soul party. Ironically, however, on this night the band broke tradition and did not perform Sam Cooke’s “Having a Party,” often the evening’s rallying set closer. The performance was very much a party all the same.