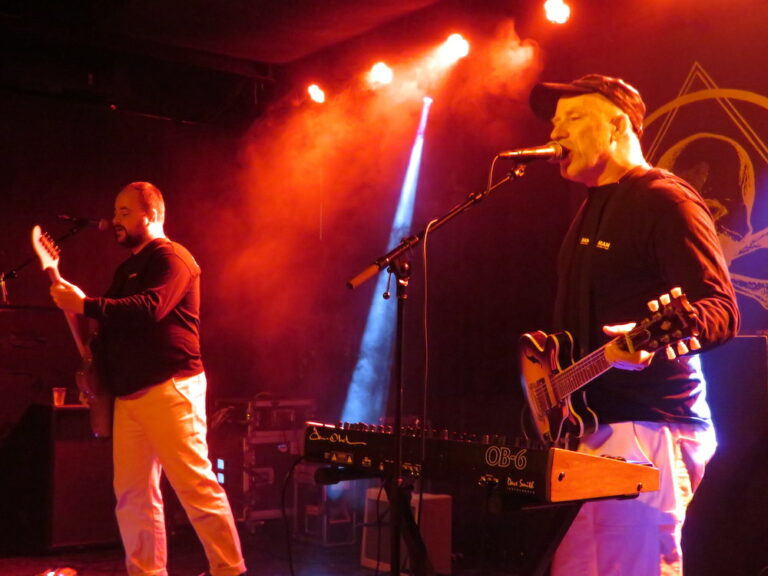 Roddy Bottum of Faith No More and his partner, Joey Holman, have a new musical project and it is so very gay.

In early 2020, Bottum released albums by his one of his side projects, Crickets, and was getting ready for a Faith No More tour. Suddenly, the pandemic panic hit hard and fast, and not knowing if state borders would close, he and Holman rented a car and drove from their home in Brooklyn to California to be close to Bottum’s ailing mother. Holman packed a guitar and, on the road, he and Bottum wrote songs that reflected how isolation had intensified their relationship. The initial intention was to play the songs only to their network of friends. By the time Bottum and Holman arrived in California, they decided to turn the songs they recorded on a laptop on the road into a serious project, MAN ON MAN (Bottum reportedly insists on all uppercase letters).

Dressed like twins at Saint Vitus Bar, Bottum and Holman walked on stage together and started the show with a kiss. MAN ON MAN was exclusively a duo, with Bottum and Holman playing guitars, keyboards, and sequencers. The duo performed experimental music that clearly was not marketed for mainstream radio. The lyrics put into words their feelings of love, separation, fear, and isolation. The music touched on post-punk, shoegaze, and non-genre innovations. Lyrics did not rhyme, and angular melodies, progressions, and arrangements escaped linear or predictable formulas. Even the sweeter songs that more squarely fell into the singer-songwriter vein seemed left of center.

Although the gravity MAN ON MAN felt two years ago has subsided substantially, a troublesome uncertainty remains, perhaps elongating the relevance of the project. The songs that documented Bottum and Holman’s artistic rebirth in the COVID-era earned a longer life span because the content was optimistic, romantic and boldly sex-positive. Songs like “Daddy” and “1983” even featured sexually-explicit scenarios. As such, MAN ON MAN effectively rallied the gay male community, for few other queer artists have been this daring or provocative.

Mainstream audiences may have difficulty with MAN ON MAN. That is okay. This project was not meant for everyone.