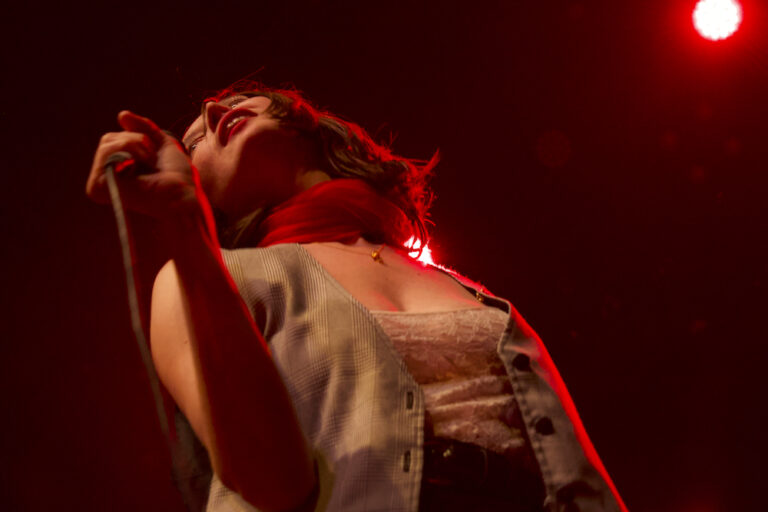 Two trains, two subways. Trouble on the 1; it’s an express train, get off at 18th. Run to 23rd street in the pouring rain. Cover the camera bag under your flannel. Check in at Gramercy Theatre for July Talk and Shilpa Ray. Arrive an hour before doors open, so you dry off in the Chipotle next door.

Canadian blues alternative band July Talk has embarked on the Live at Last Tour with support from New Yorkers Shilpa Ray. When both bands rolled through New York City, the daytime was July but the evening brought April showers.

Shilpa Ray started the show at 9:00 p.m; a quartet consisting of a guitarist, a drummer, a bassist, and helmed by New Jersey born Indian American Shilpa Ray on vocals, Hammond organ, and cowbell. Shilpa has an impressive resume: being praised by critics for over two full decades, touring with Nick Cave and the Bad Seeds as a backup singer, and more. Shilpa came out in a suede pantsuit and yellow zebra shoes. I can’t pin down her voice – it’s equal parts Ella Fitzgerald jazz mixed with dashes of Amy Winehouse blues and Janis Joplin rock raspiness.

After the band’s fourth song, she addressed the crowd. “I love being home. I love being a New Yorker. I watered my plants today, which was nice,” Ray joked. The quartet played through about 10 songs in their 45 minute set, all with retro appeal and current innovation. Throughout, Shilpa channeled Poly Styrene and delivered a performance full of attitude and talent.

The quintet of July Talk hit the stage around 10:15, with bassist Josh Warburton, drummer Danny Miles, and guitarist Ian Docherty going out first. Right behind them were guitarist/vocalist Peter Dreimanis and vocalist Leah Fay. They struck up “Picturing Love,” a song from their 2016 sophomore album that rose to No. 2 on the Canadian rock charts. Peter and Leah trade vocals, his gravelly rasp paired with her sweet serenade work wonderfully. The both of them have incredible chemistry (they play lovers on stage, but word on the street is that it is all for the performance) teasing each other in a mystic dance of shifting power dynamics that is fun and sexy to watch.

Fay dances around the stage with Mick Jagger swagger, while Peter can be found throwing a mic 15 feet in the air like Roger Daltrey. After their third song, “Lola and Joseph,” Peter spoke to the audience. “It’s very good to be back here. We love New York, it’s fucked up it’s been two years since we’ve been here.” Leah chimed in next with, “This is a song if you’ve ever punched a wall,” and started “Beck + Call.” This is a rockin’ tune where Ian shreds, Danny bangs his drums with prowess and might, and the room lights up with plenty of sexual tension. Peter’s voice has been compared to Tom Waits’, but up until that point, I had not heard it. Boy, I was mistaken.

July Talk played 16 songs, including a few from 2020’s Pray for It, which they could not tour for, as well as their 2021 single, “I Am Water.” Each member of the band is very talented; Ian not only plays the guitar, but can also hit bongos simultaneously, Peter can be seen riffing on his black Gibson Guild and hunched over his keyboard, and Leah sings, plays her Les Paul, and the organ.

Now more than ever I am wishing that this band received more mainstream attention, because they are devoted to their craft and deliver cutting-edge rock that has retro appeal on stage and off. (I also wish I wasn’t at the mercy of trains, but the former has more probability.)