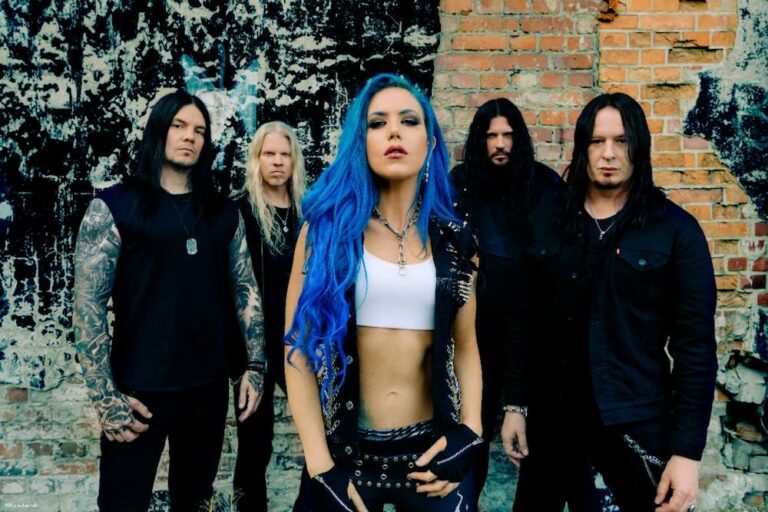 As music journalists and social media mavens grow increasingly frustrated, desperate to brand Arch Enemy’s fiery brand of extreme metal, it’s best not to do so. “Melodic Death Metal” is just one of the unfortunate names used to define the band’s unique style. Yet, the simplest, and arguably best, way to describe Arch Enemy’s infectious, often-uplifting anthems is “inspired” or “original.”

While most artists who have also around more than 25 years (and have parted ways with key members) are now on the decline, Arch Enemy’s latest, Deceivers, is arguably their masterpiece. It has already spawned three music video hits (“Deceiver, Deceiver,” “Handshake with Hell,” and “House of Mirrors”) and is certain to produce more once it is released on July 29th. The band are looking forward to playing the trio of new songs along with their best-known tunes throughout the imminent North American Siege Tour, which they are co-headlining with Behemoth. Also featuring special guests Napalm Death and Unto Others, the tour has two area dates: Thursday, April 28 at NYC’s Terminal 5 and Friday, April 29 at The Fillmore Philadelphia.

Although formed in Sweden, Arch Enemy now boast an international lineup that includes Canadian frontperson Alissa White-Gluz and Seattle’s Jeff Loomis. Obviously, the pandemic was especially rough on the band known for being road warriors. Thankfully, that looks to change now that the world is embracing a new sense of normalcy.

Having just arrived in California after a long, grueling flight from Sweden, guitarist and founding member Mike Amott is shaking off jetlag before beginning pre-tour rehearsals with his bandmates. First, however, he spent a few moments chatting with The Aquarian.

Deceivers is released at the end of July. Why tour now?

We have three singles out and they’re doing pretty well. After everything that’s been going on these last couple of years, we’re just excited to perform live again. Hopefully, people will come out and enjoy seeing us.

So the band will perform “Deceive, Deceiver,” “Handshake with Hell,” and “House of Mirrors” during the tour?

We start rehearsing on Tuesday and the songs are on the list.

The last time Arch Enemy performed in New York, at Hammerstein Ballroom, the band was second on a bill to Amon Amarth. It was a venue Arch Enemy could have headlined and sold out. Why did the band choose to participate in such a tour package?

There’s so many tours going on nowadays and you see more and more of these packages with four or five bands coming together, and they might be bands of equal stature, like Arch Enemy and Behemoth are on this current tour. We’re going to take turns closing shows. But when we perform lower on a bill, it’s less pressure on the band. It’s not always up to us to sell all the tickets [Laughs].

Arch Enemy formed in 1996. Most bands that have been around for that long begin to slow down. Not your band. In fact, Deceivers is not only the best of the Alissa White-Gluz era, it just might be the band’s masterpiece.

That’s awesome, thank you. We put a lot of work into it. It’s a group effort. Yes, I am a main songwriter, but everyone contributed. As a songwriter, I like to come up with good, simple ideas for songs. I guess we’ve been fortunate that the ideas keep coming somehow [Laughs].

Is it true you and drummer Daniel Erlandsson began work on the album before the pandemic by heading to Mexico to write songs? Why leave the mecca of extreme metal, Scandinavia?

We wanted to get away from the ice and the snow. I wanted to create music by a beach. I grew up in the cold Scandinavian winters where it’s mostly dark and we don’t have a lot of daylight. That’s embedded in our souls, in our DNA. Daniel and I just wanted to set up a little songwriting camp where the weather was warm for once.

Then the pandemic struck. How did the lockdown affect the creation of Deceivers?

It became more complicated. Daniel and I went back to Sweden where there were not many restrictions, so we could still work, but when it came time to record… everything stopped. There were so many travel restrictions and having an international lineup became an issue. [Guitarist] Jeff [Loomis] lives in Seattle and Alissa is in Canada.

We eventually managed to fly Alissa in, but we certainly had to jump through hoops. It was a logistically nightmare. It took longer, was more complicated and cost more money, but we got it done. We did, however, have to quarantine for two weeks before we could like meet up with and join the others at work.

Is the orchestration on Deceivers a result of having more time in the studio?

The extra time in the studio certainly helped on the production side of [the recording]. You get to work on little details and, several months later, we decided to go back into the studio and open up some songs. Yes, we did add a lot at the studio in Denmark with our new producer Jacob Hansen.

Not too cold there?

It was a great studio in the countryside and we enjoyed the experience. No, there was not much snow at the time [Laughs].

Arch Enemy recorded a live record with Alissa at Waken (2017’s As the Stages Burn), but would you consider recording another live record at the famed music festival, this time with an orchestra?

We are actually playing at Waken this year, but we are not scheduled to perform with an orchestra. That would be cool to do. Maybe somewhere down the line.

Are you bothered by the different ways Arch Enemy’s music is described? It does mean the band has an original sound.

People sometimes call us melodic death metal, which we definitely are not. And I don’t feel we’re death metal, though some members have been in Carcass and Witchery.

Bassist Sharlee d’Angelo seems to have been in most Death Metal bands.

[Laughs] Yeah. Our music, however, is simply a mixture of our influences.

When former singer Angela Gossow stepped down nearly a decade ago, fans were obviously disappointed and worried about the band’s future. Not only did she have a great voice, but she also had great stage presence. The band, however, found the perfect replacement in Alissa White-Gluz.

That was a big blow to us. She was the established face and voice of Arch Enemy. After 13 years she wanted to step away and focus on other stuff. Me, Sharlee, and Daniel wondered if we should pack it in or keep going. Of course, we decided to keep going. We had some new songs that would become War Eternal. When Alissa entered the picture, when we rehearsed with her, it just fit. When she came over to Sweden it felt really great.

To be honest, I expected the band to go down a bit. I thought we’d have to reestablish ourselves. I thought people would be skeptical. I believed in what we were doing, so I thought we were slowly going to build it back up to where we were when Angela left.

Take a step back to take a two steps forward?

Exactly. I can’t explain how we did it, but we got more popular. As much talent as this band has, we got lucky. When Paul Di’Anno left Iron Maiden it took me time to finally wrap my head around that and accept Bruce Dickinson. When Ronnie James Dio joined Sabbath, it divided the fanbase.

And there was no social media then. The moment Alissa joined fans surfed the internet to find out who she was. Social media can be a doubled-edged-sword. It can hurt a band if they do not know how to use it properly. Arch Enemy uses it to promote music videos and stay in touch with fans around the world.

We’ve seen so many friends come and go. Even in metal there is industrial metal, rap metal, and folk metal. There are bands who follow trends, but I’ve always stayed true to this thing that I do. It’s got some of the aggression from the death metal I grew up with, but it’s also got a lot of classic metal. First and foremost, we play what we want to hear ourselves.

Arch Enemy is one of the bands that have used music video to your advantage.

We have fans all over the world and we can’t play everywhere right now, but I know the fans would love to see the band. I was a huge Slayer fan, but they didn’t often during mid eighties, so I had that tape with Venom, Slayer, and Exodus.

MTV may not play many music videos these days, but YouTube is a great tool for fans and bands to stay in touch.

THE NORTH AMERICAN SIEGE TOUR FEATURING ARCH ENEMY AND BEHEMOTH WITH SPECIAL GUESTS NAPALM DEATH AND UNTO OTHERS COMES TO TERMINAL 5 ON APRIL 28 and THE FILLMORE PHILADELPHIA ON APRIL 29. CLICK HERE FOR TICKETS AND INFO!