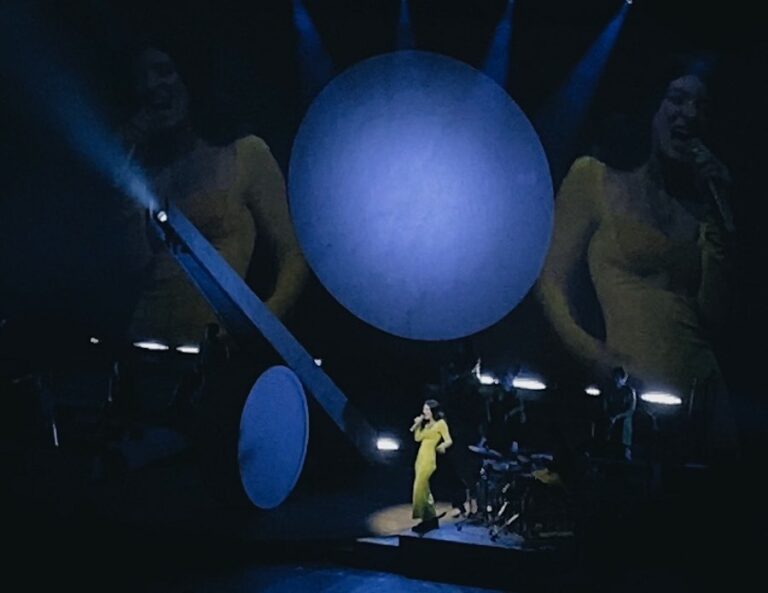 After four long years, Lorde makes a triumphant, tender return to New York with a sold out Radio City.

Lorde is an unorthodox pop star. The 25-year-old New Zealander, who’s real name is Ella Yelich-O’Connor, largely stays off social media (unless you count her uncovered secret onion ring review account). She takes multi-year hiatuses that feel like lifetimes within the pop world. Her on-stage dance moves to this day are unchoreographed and they embody the “awkward” and untempered energy of a teenager maneuvering their way through a house party, far removed from her mainstream pop counterparts. She even sings in “The Path,” the opening track of her latest album, Solar Power, “Now if you’re looking for a savior – well, that’s not me.”

Yet, when she exploded onto the scene in the early 2010s with her minimalist sound and nostalgic drones, Lorde was hailed by the likes of Taylor Swift and was even deemed the “future of music” by David Bowie. Her 2013 Pure Heroine album featured commentary on hoarding wealth and materialism, while holding teenage ideologies of growing up. She was the youngest artist, at just 17, to win Song of the Year at the Grammys in 2014 for the insanely popular “Royals.” Lorde had the world to live up to.

The critically acclaimed Melodrama released in 2017, a pulsating and intimate electro-pop album that took listeners through post-breakup feelings. Lorde brought Melodrama on a 76-show tour through arenas like Prudential Center in Newark and Barclays Center in Brooklyn. For those shows, the set piece was a “see-through” box that would raise in the air via four cables, tilting and holding occasional performers.

With Solar Power, Lorde revisited her minimalist beginnings, inspired by the power of the sun, messages to her past self, and the importance of our now weakened environment. Instead of the 808’s and droning synths, however, the new release features acoustic guitars and drums, Lorde’s vocals have a sunbathed filter over them at all times. Matching the more toned back timbre of the record, is the tour locations themselves. Instead of an arena tour, the stages match that of Radio City’s theater style, along with other outdoor amphitheaters and bowls.

For the stage on the Solar Power Tour, the center-piece is a cylindrical, double-sided 3D shape that has an opaque cloth screen separating the two open-faced sides. This cloth screen silhouettes Lorde as she opens the set with “Leader of a New Regime,” an interlude song off the new record that depicts a not so distant future where the natural environment has been largely devastated and anyone left must restart society. Balancing upon that cylindrical structure is an acute staircase that Lorde climbs and sings from during most Solar Power songs. Finally, the rotating stage is surrounded by two platforms and wider chorus style steps that the live band mainly occupies, with the backdrop screen always depicting some style of ring.

Mostly, when Lorde performs songs from Melodrama and Pure Heroine, she moves across the front of the stage, dawning her iconic, free form, dance moves. “Ribs” is a fan favorite song off of the latter, nostalgia driven drones back up the teenage fear fueled lyrics about growing up. The blue lighting during this song performance influences imagery of running water. It’s an experience, simply put.

Solar Power is given a new breath of life when hearing it live, and if the new record was too stark of a change for some long time fans, you will find a new appreciation for it. “Secrets From a Girl (Who’s Seen it All)” sounds groovier than ever in person. Actually, hearing Lorde sing some of these lyrics off the album gives them their identity, especially during this performance at Radio City Music Hall. It’s been about 10 years since Lorde found her fame and feelings of a teenager can find oneself living life at a fast pace. Hearing some of these songs live, it shows that she’s found some inner peace in growing up.

Considering the themes of the new Solar Power songs, “Perfect Places” off of Melodrama has a new life when it follows up on the set list, and you feel it all. When Lorde performs the titular track “Solar Power” in the same set, everything comes full circle. The yellow confetti flies and the rays of the sun the more warmer.