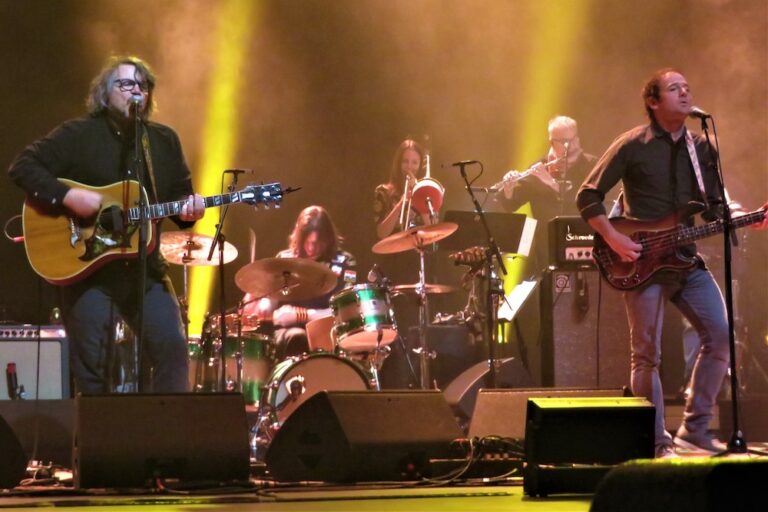 Twenty years ago, Yankee Hotel Foxtrot gave Wilco its first taste of mainstream success, but at the cost of considerable drama. Recording sessions for the album began in late 2000, which were documented for the film documentary I Am Trying to Break Your Heart. In these sessions, band leader Jeff Tweedy took the band further away from its alternative country and roots-rock origins by introducing a more atmospheric and experimental sound. To accomplish this goal, his maneuvers diminished the role of the band’s drummer by bringing in another drummer to re-record parts of the album. Tweedy’s clashes with another member led to that member’s acrimonious dismissal. Wilco’s record company rejected the album, leading to an early termination of the recording contract and forcing the band to seek another corporate sponsor. Overcoming so many obstacles, the game-changing album became Wilco’s best seller.

To celebrate the 20th anniversary of Yankee Hotel Foxtrot‘s release on September 18, 2001, and also the release of a deluxe box set that added demos, instrumentals, outtakes, and live performances, Wilco scheduled five concerts in New York City followed by three performances in its hometown of Chicago, Illinois. Starting the United Palace shows, an unadvertised string ensemble, the Aizuri Quartet, received a standing ovation after playing a rousing half hour of avant-garde chamber music that included instrumental snippets of familiar pop songs. Under light structures resembling the two towers of the Marina City complex featured on the album’s cover, Wilco then played Yankee Hotel Foxtrot in original track order, followed by a second set of songs from various albums.

The performance could not be an exact duplication of the original project, however, even though the musicians reportedly utilized the gear used in the recording. Wilco’s personnel stabilized in 2004, meaning that several of the musicians on the stage had not played on the original recordings. Wilco presently consists of founding members Tweedy and bassist John Stirratt, guitarist Nels Cline, multi-instrumentalist Pat Sansone, keyboard player Mikael Jorgensen, and drummer Glenn Kotche. In addition, the Aizuri Quartet plus three brass players augmented the arrangements. Many of the songs which remained staples of Wilco’s repertoire for 20 years had evolved into elongated jam versions, yet this time around the band retreated to precision and remained fairly faithful to the original versions. Nevertheless, despite these variables, the revamped personnel captured much of the magic that happened at the turn of the century.

The performance succeeded as a revisit to the old Wilco, yet that came with its liabilities. The conflicts and the turmoil of the original sessions are no longer the context, as the subsequent success of the album dispelled the uncertainty which permeated the ambitious recordings. Tweedy is now sober, so the self-loathing in many of those intense lyrics may no longer be autobiographical. The brooding and melancholy feel of the darker songs, filled with self-depreciative lyrics, reflected a time and place that over the years Wilco replaced with a more upbeat and rocking platform. Wilco played with a clean and clear vitality, so that the performance was not simply a sing-along nostalgia set, but it still was not the storming rock and roll Wilco has brought to live concerts in recent years. The rocking was suspended until the end of the evening.

Keeping the songs of Yankee Hotel Foxtrot close to their original length meant that the main set was less than an hour long. Wilco waved and walked off the stage, as the audience cheered for an encore. On the first night, Wilco returned to the stage and performed three additional songs; thankfully, on this Easter Sunday night, the band came back and played eight songs, making it more like a second set than an encore. The band even performed “The Good Part,” a rarity the band stopped performing live in 2014.

Wilco took its fans into the time machine for this year’s limited engagement, making for a unique treat for Wilco diehards. As special as this was, it may have left a fan wondering what Wilco will do next. There has been no mention, but perhaps these performances will become available for posterity. Yankee Hotel Foxtrot‘s groundbreaking was 20 years ago; Wilco’s challenge now is to re-spark the creative juices and open a new chapter in its history.