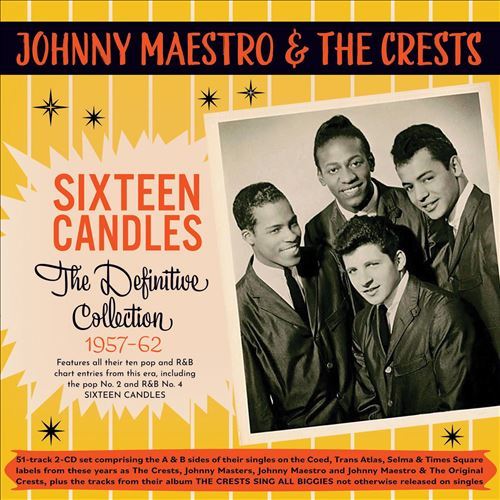 On The Record: The Crests’ ‘Sixteen Candles: The Definitive Collection’ plus Michael Weston King & My Darling Clementine

The racially integrated Crests (which initially also included a female member) ranked among the best and most successful groups of the late fifties/early sixties doo-wop era. Discovered while singing in the New York City subways, they incorporated elements of pop and R&B and featured a gifted tenor lead singer who some years later would revisit stardom with the Brooklyn Bridge (“The Worst That Could Happen”).

Filling two CDs and offering detailed liner notes, the 51-track Sixteen Candles is as definitive as its subtitle promises. It includes everything on the other aforementioned releases (which overlapped heavily) except for one forgettable number, and it includes dozens of additional songs, some of which were released under slightly different names. (Attentive readers will note, for example, that the lead singer’s surname is spelled differently in the titles of the first two albums mentioned in this review. He also recorded as Johnny Masters. To further complicate matters, his real name was John Mastrangelo.)

For starters, Sixteen Candles features both sides of each of the Crests’ singles for the Coed label, where they scored all their biggest successes, including the one referenced in the album’s moniker (which made it to No. 2 in 1959) and their other Top 40 hits: “Six Nights a Week,” “The Angels Listened In,” “Model Girl,” “What a Surprise,” and “Step by Step.” The anthology also offers the tracks from a 1960 Coed album called The Crests Sing All Biggies that were not issued as singles – mostly covers of other artists’ hits, like the Penguins’ “Earth Angel,” the Five Satins’ “I Remember (In the Still of the Night),” and Buddy Knox’s “Party Doll.” Here, too, are the Crests’ A and B sides for three other labels.

The group’s charmingly anachronistic lyrics are virtually all about teen romance. This collection’s title cut, for example, finds Maestro singing to a girlfriend on her birthday that “you’re only 16, but you’re my teenage queen”) while “A Year Ago Tonight” offers a 17th birthday sequel about how “true love was born a year ago tonight.” In “The Angels Listened In,” Maestro proclaims that the angels answered his prayers and “sent me you” while in “Trouble in Paradise,” he laments that “some devil told my angel a lot of lies.”

A few songs end with a twist. There’s a cover here of the Rays’ 1957 hit, “Silhouettes,” in which the singer describes his alarm when he takes a late-night walk past his girlfriend’s house and sees silhouettes in a window shade of her with another man. Upset, he rings her doorbell, and when strangers answer, realizes he’s at the wrong house. Similarly, in the Crests’ own “What a Surprise,” the singer’s “world came to an end” when he spies his girlfriend walking down the street with his best friend. He follows them to her home, watches them go inside, sees all their friends arrive, and laments that “it was plain to see that you’d invited everyone, everyone but me.” But then when he goes in to confront her, the crowd cheers and his girlfriend shouts “happy birthday, dear!”

OK, so it’s not Bob Dylan. But thanks to catchy melodies, the Crests’ harmonies, and especially Maestro’s distinctive lead vocals, it’s doo-wop heaven.

Veteran British roots rocker Michael Weston King is known primarily for his work with the now-defunct country-rock band the Good Sons and the excellent records he has made in recent years with his wife, Lou Dalgleish, as My Darling Clementine. Another side of him emerges on the terrific The Struggle, his first solo album in a decade, which features guest appearances by Dalgleish, longtime Elvis Costello bandmate Steve Nieve, the way-underappreciated singer-songwriter Jeb Loy Nichols, jazz trombonist Barnaby Dickinson,  and, on woodwinds, King’s daughter, Mabel.

Melancholy pervades much of the record, but don’t let that keep you away: The Struggle is as musically appealing as it is wistful. And it packs an emotional wallop, thanks to King’s evocative lyrics and fine vocal work, which variously recalls artists ranging from Mickey Newbury to Tom Russell to Glen Campbell.

Highlights include “The Hardest Thing of All,” a portrait of depression; “Another Dying Day,” in which a singer tries to face life after his lover has left him; and Sugar,” a co-write with Peter Case that sounds like something Neil Diamond might have written if he leaned a bit more toward folk than pop. The album’s bookends are two versions of the expertly crafted “Weight of the World,” which offers the first-person tale of a New York City cop who regrets his vote for Donald Trump.

As noted above, King’s main project in recent years has been My Darling Clementine, the duo consisting of him and his wife. Their latest effort is Country Darkness, an album that collects the contents of three EPs featuring covers of songs by Elvis Costello. The CD came out in November 2020 and charted in the UK and Europe, but the pandemic got in the way of American touring and, according to a publicist, the record got lost in the COVID shuffle.

That’s unfortunate because the set – on which the pair collaborate with Costello keyboardist Steve Nieve – is excellent. The pair successfully reimagine a dozen of Elvis’s more country-flavored compositions, including “Stranger in the House,” “I Felt the Chill Before the Winter Came” (a co-write with Loretta Lynn), and “Either Side of the Same Town.” There’s also one composition by King, the soulful album-closing “Powerless.”