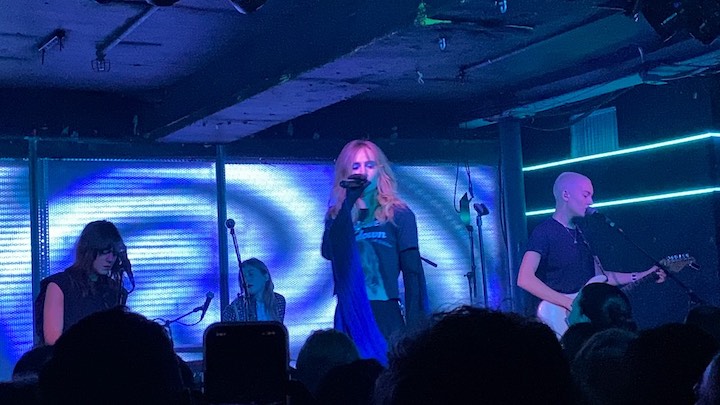 With a rich, dreamy sound, Suki Waterhouse performed to a formidable fan base at a sold out Elsewhere Zone One.

Despite the recent release of her debut album, I Can’t Let Go, Suki Waterhouse is far from a newbie in the music world. The Londener’s first single, “Brutally,” was released back in 2016, with a new track in each following year, amassing millions of plays. If the name sounds recognizable from elsewhere, it’s likely from her accruing an impressive resume in modeling for the likes of Burberry and Vogue, among many others. Or perhaps from acting, with her most anticipated role being in the upcoming Amazon series Daisy Jones and the Six where she continues her musical talents this time as the keyboardist for the fictional, Fleetwood Mac-inspired band. Waterhouse and her fellow cast members have even recorded original music for the show, rehearsing everyday for six months straight.

As for her own original music, Waterhouse writes dreamy, indie-folk pop songs that characterize formative moments of her life, from break-ups and internet facades to watching a family member grow old and sick. Her songwriting started when faced with depression at 23 during a period of loneliness, and since then Waterhouse has been essentially writing the debut album for the past seven years. She’s formed an impressive fan base with these personal, introspective tracks.

Dawning the stage was an alluring Suki Waterhouse who wore stark blue eyeshadow and fringe-draped sleeves, and like any true rockstar, finished off her look with her own merchandise (a Suki t-shirt). She rounded out the band, a live, fully female-fronted group that featured guitar, drums, and keyboard. The performer’s airy vocals complemented the intimate, 250-capacity Zone One at Elsewhere.

The most notable feature of Waterhouse’s set was just how great of a singer she really is. Her largely lush, lulled vocals form into energetic jumps on “NEON SIGNS,” a song with distorted guitars and Motown style drum builds that is currently only found as a music video on Youtube. As for back-up vocals, it’s not just the band that helps – Waterhouse fans sing along in a delicate, but dedicated way. Apparent most on the intro to “Johanna” where the crowd solo performs the intro lines, “Can’t find you, can’t find you / Where are you? Where are you?” as Waterhouse soaks in the experience.

Waterhouse had a commanding stage presence considering she’s only performed a handful of previous shows. Though, with her acting and modeling career to take cues from, she made it look natural as she was a seasoned on-stage performer. The interactions between fans and her are genuine, especially in a moment where her fringe sleeves were tangled up as she spouts mid-set, “Oh, Crikey!”

Embracing the more ethereal sides of her music, Waterhouse sang her piano ballad “Coolest Place in the World.” It’s one of her prettiest songs sonically, though it’s filled with desperation as Waterhouse stated that the song is about attempting to change someone’s mind in a relationship.

Closing the set was “Melrose Meltdown,” a lofty, atmospheric track that flutters with spacious drum fills and floating piano chords as the chorus enters “Welcome to my Melrose meltdown / Nobody ever breaks up, we just breakdown.” It’s a fitting finale for the set, as Waterhouse described creating the song as wanting something equally powerful and gentle, and there’s no more perfect way to describe the experience of hearing it live in concert. In fact, “equally powerful and gentle” illustrates what a Suki Waterhouse show is like altogether.

Waterhouse will be touring again in late summer, making a stop at Radio City Music Hall as she opens for one of her own favorite artists (and label mate), Father John Misty; two thought-provoking, dreamy acts.