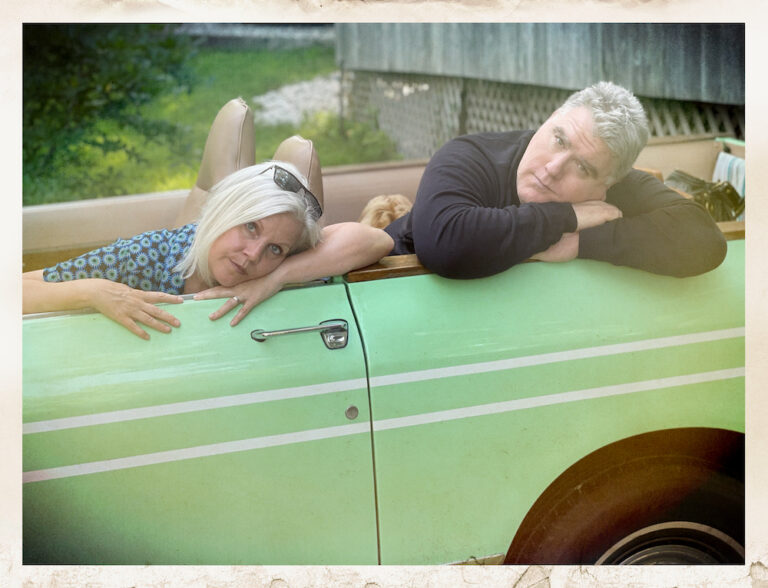 If spring was an album, it would be this one: the debut from The Loyal Seas, out Friday.

On May 20, The Loyal Seas will release their debut studio album, Strange Mornings in the Garden (via American Laundromat Records), a collection of 10 evocative, shimmering songs. It’s no surprise that it’s so spellbinding, given that this duo’s members are Tanya Donelly (Throwing Muses, The Breeders, Belly) and Brian Sullivan (Dylan in the Movies), both long revered for their masterful songwriting and performing abilities.

“We’ve been sitting with these songs for a long time,” Sullivan says during a recent conference call with Donelly and The Aquarian. “I think we started to write the record about five years ago. Then we would stop and go do our other stuff, and then come back and dive into it again, and then stop. With the pandemic, we really had a chance to focus. We were locked down, literally, so we had time to push ourselves to really finish what we started, and I’m so glad that we did.”

While this is the first full-length album that Donelly and Sullivan have done as The Loyal Seas, their partnership actually goes back much further. “The very first thing we did was [the single] ‘August Moon’ in 2005,” she notes.

Their friendship goes back a decade more beyond that. They met almost 30 years ago at Fort Apache, a recording studio/management company office that had become a hub for artists in the Boston alternative rock scene. “All of the artists, the crew, the staff – it was a super tight family of people at that point, and so a lot of music sprouted from those connections,” Donelly says of the place. “Bands were forming, people were guesting on each other’s stuff. Everyone was writing, everyone was playing. It was an exciting time, and that’s where we started together.”

As a new songwriter who was still finding his way into the craft, Sullivan found the Fort Apache environment to be particularly stimulating. “A lot of us looked up to Tanya and all these artists that really figured out a way to really do it as a full-time gig,” he explains. “That was the dream, right? So we had a lot of inspiration around us all the time: how to be a responsible musician and human being, but also how to cultivate your songwriting abilities.”

Although she was the more established artist, Donelly was immediately impressed with Sullivan’s skills. “The first time I ever heard a song that he wrote, I was a fan,” she says. Known for co-founding three of the most acclaimed alternative rock bands of the 1990s (Throwing Muses with her stepsister Kristen Hirsh, then The Breeders along with Pixies member Kim Deal, and finally fronting her own band, Belly), Donelly has found it easy to work with Sullivan, too, as The Loyal Seas.

“These songs are Brian’s compositions – we both had a hand in the structuring of things and arrangements, but this is 70% his baby, in a way,” Donelly highlights of the tracks on Strange Mornings in the Garden. “He sent me music and I would write lyrics and melodies on top. Which I’m completely happy about, because his musical landscape is so familiar to me and it just feels like home to me, so it’s easy for me to write words and to find stories in the music he is sending. His music just speaks to me. And I speak back!”

With Donelly in Massachusetts and Sullivan in California at the time, they had to mostly work remotely during the songwriting process, though Sullivan says this wasn’t necessarily a drawback: “The greatest thing about that was knowing that I would get something so great back every time,” he says.

For her lyrics, Donelly tells us that “there’s an overarching theme of long-term relationships of one kind or another. Just that sort of decades in, bone deep connection and knowledge of someone.” Yet, she adds, “Each song has its own little tale to tell, I think.”

Musically, “I wanted to sort of run the gamut of the emotions that we go through just in a day,” Sullivan adds. “We were writing a good chunk of the record during the pandemic. On some rough days, I wanted to write something really poppy and cheery. On the days that I could handle my emotions, I could go into the more acoustic and sadder songs – but they have a glimmer of hope. There were a lot of silver linings over the last couple of years. This record, for us, was definitely one of them. It kept us sane in a not so sane world.”

With Strange Mornings in the Garden coming out soon (alongside special release merchandise available at The Loyal Seas’ Bandcamp page), they’ve set two album release concerts on June 25 (a matinee and an evening show) in Somerville, Massachusetts, at The Burren (both already sold out), with more shows to follow. It’s a good way to kick off a release that is clearly near and dear to both Donelly and Sullivan’s hearts, in which Donelly says, “We both are just so thrilled with the way this album came out, and super proud to put it out there.”

FRIDAY, MAY 20, SEES THE RELEASE OF STRANGE MORNINGS IN THE GARDEN FROM THE LOYAL SEAS. FOR PLACES TO STREAM AND PURCHASE, CLICK HERE!