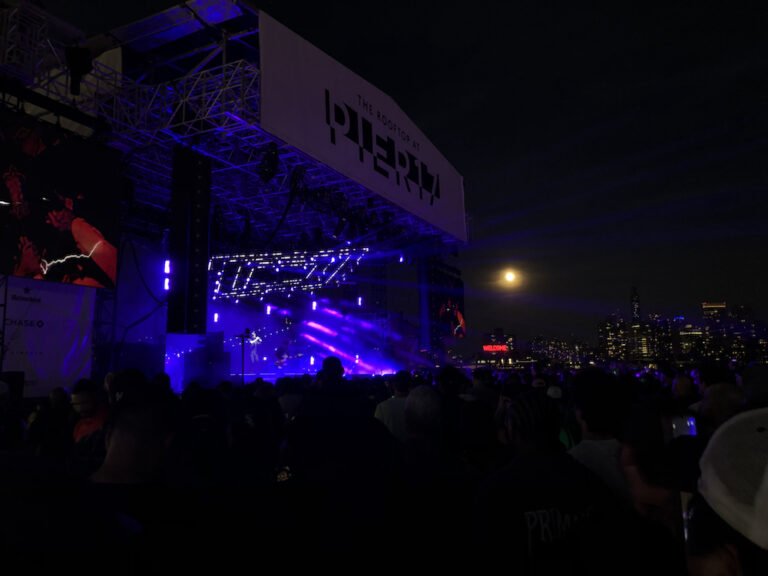 Deftones, Gojira, and VOWWS played the rooftop at Pier 17 during a full lunar eclipse on May 15.

Alt-metal legends Deftones and Gojira initially announced a summer tour in 2020 with Poppy opening, which was postponed when the pandemic hit. Rescheduled for summer 2021, touring logistics still weren’t concrete, so third time’s the charm (and it was worth the wait).

Replacing experimental singer Poppy was the Australian-based ‘death-pop’ duo VOWWS, consisting of singer/guitarist Matt James and singer/synth player Arezo “Rizz” Khanjani. They hit the stage right at 6:00 p.m., both wearing sleek black tailcoats and sunglasses. James played a red Gibson SG on one side of the stage, while Rizz stood on the opposite side playing keyboard, pedals, and even a vocoder. Their sound is industrial-based darkwave, and has impressed the likes of Gary Numan and Deftones’ Chino Moreno. They layer their melodies nicely and have fascinating vocal harmonies. Although they only played for a half hour (28 minutes, if we’re being precise), Rizz and Matt added a level of ambiance that matched Deftones’ aesthetic.

The last time I saw Gojira was 2019. Since then, the French metal quartet – bassist Jean-Michel Labadie, lead guitarist Christian Andreau, and the Duplantier brothers with Joe on guitar and vocals and Mario behind the drums – released Fortitude, one of 2021’s best metal releases. I was eager to hear some of these new songs played live. After their setup, a 180 second countdown started on the screens on either side of the stage before Mario appeared at the drumset. Then the rest of them hit the stage and stuck up “Born for One Thing,” right from Fortitude! The two dudes behind me nudged my shoulder, and we started the pit which grew as the song commenced. The second song they played was one of my favorites: “Backbone,” or as Joe described it, “Back fucking bone.” I entered the pit once more.

Following that, “Stranded” saw the use of Gojira’s four smoke cannons, projecting clouds over the audience. The standout of their set was “Flying Whales,” a song I’ve never experienced live. The crowd began to split as the band struck up the long, intensifying intro and I chose to be on the frontlines of the upcoming wall of death. When that signifying riff finally came, it was a madhouse; bodies coming from all sides. Breakdown after breakdown over this eight minute song, we moshed. It was a dream come true. Another standout track they played was “Love,” from their first album, and dedicated it to Deftones.

The quartet plays with laser precision and high energy. Mario was seen centering himself before playing utterly insane drum parts, Joe’s charisma is infectious, Christian and Jean-Michel humbly deliver the onslaught. Their setlist was a healthy career mix, too. The four of them frequently threw guitar picks and drumsticks into the crowd. Before their last song “Amazonia,” Joe said to the crowd, “Thank you very much for having us. This is our last song, and this goes out to all he indegenous people around the world.”

I have seen a lot of strangeness at metal shows. One of the funniest things I’ve ever seen was three long-haired dudes in Home Depot aprons, moshing and thrashing about… and then one-by-one throwing said aprons onto the stage. Gojira does that to people. One of the Home Depot dudes caught one of Mario’s drumsticks. Lucky guy; (probably) indirectly quit his job, had the time of his life, and caught a stick.

As the sun set over Brooklyn, the moon began to rise over the East River just as Deftones were taking the stage. The sextet of vocalist Chino Moreno, guitarists Stephen Carpenter and Lance Jackman, bassist Fred Sablan, drummer Abe Cunningham, and turntablist Frank Delgado have been one of the most popular metal bands for over two decades. The first song played under a diamond of lights was “Genesis,” the first song off 2020’s Ohms. Chino practically emerged from the floor and started moving around the stage with vigor.

Although the band has undeniable talent and Chino’s voice remains one of the most unique in rock and metal memory, their stage show is impressive. They have a diamond with 24 lights overhead, plus a row of string lights underneath the risers. Then there’s spotlights, lasers, and more lights that I have no clue how to explain. It’s a lightshow spectacle worth seeing.

After about four songs, Chino grabbed a white Gibson SG for “Be Quiet and Drive (Far Away)” and played it frequently throughout the rest of the set. The songs chosen in their 19 song set were career-spanning with plenty of of tracks representing just about every Deftones’ record. Personally, I would have liked to hear “Kimdracula” and “Minerva,” but I really can’t decry their setlist; it’s stacked.

As an inspiration for numerous bands over their 35 year career, Deftones are a leader in the rock world. They’re also one of the few examples of a nu-metal band that was able to adapt with the times, as opposed to bands that could not escape 1999. Chino looks to be in great shape and truly sounds remarkable. The rest of the band are strong on their own, performers with no sign of stopping.

There was something in the air that night overlooking the East River; a blood moon overhead, the Rangers won their playoff game, and Deftones’ music carried into the night.