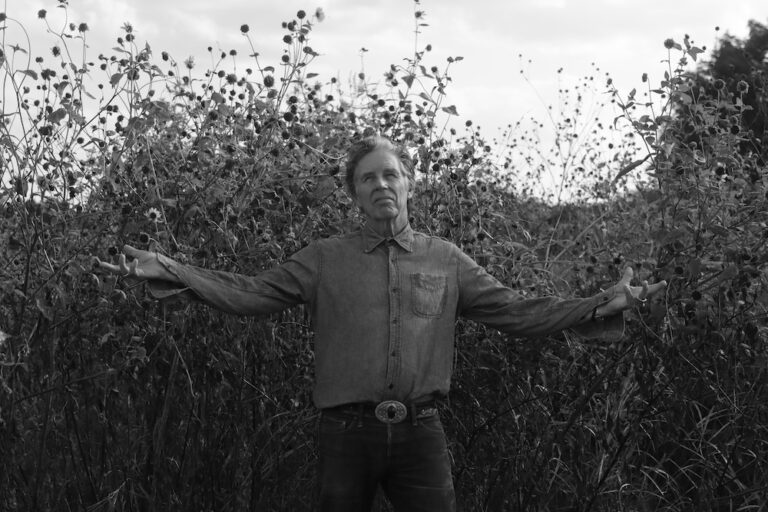 Influential is an understatement when it comes to John Doe, a musician whose collection of sights and sounds span a good handful of decades and venture through a variety of artistic avenues.

John Doe is best known as a singer/bass guitarist for the iconic punk band X, but for much of his five-decade career, he’s also has a successful solo career – and for that, he just released a new album, Fables in a Foreign Land, released May 20 via Fat Possum Records. (To support it, he’ll play a string of shows in the area: City Winery in Philadelphia on June 15, TV Eye in Ridgewood, NY on June 16, and The Atlantic in Brooklyn on June 17.)

Doe is affable as he explains what made him release a new album now: “I’m pretty consistent in that I’ll just look at the calendar and say, ‘Oh shit, it’s been five years since I put out a solo record. I guess I’d better get to work!’” Unlike his often raucous work with X, his solo songs “are slower tempo, and there’s more of a singular narrator. It’s more personal.”

Fables in a Foreign Land is something of a concept album, telling stories about a rather dystopian pre-Industrial world. He gave it that title because “fables seem to have a moral.” In this album, Doe reveals, “Maybe the moral is to survive. Maybe the moral is [that] there’s a lot of isolation and loneliness. I just figured that’s the way things would be if you have to leave home in 1890 and you’re traveling. You’d be isolated and lonely.”

“And lo and behold, [now] there is a pandemic and people are isolated and lonely. So that was a happy accident,” he adds wryly.

This is no pandemic-inspired album, however: Doe started writing this material in 2017 and denies he had any sort of premonition about what was to come with COVID. “I wouldn’t give myself that much credit,” he says. “You write things and you stick to a certain subject, then sooner or later the reality catches up with it. I liken it to when you break up or someone passes away, and you listen to the radio and there’s sad songs or heartbreak songs and you feel like it’s speaking directly to you. When you’re very vulnerable, then you can relate to these things on a deeper level.”

He also wanted to write songs about that earlier era because he wanted to take listeners back to a time before the world revolved around the internet. “So many aspects of life now are virtual. You have to jump through these technological hoops in order to experience something. I try to have as much elemental experience as I can – being outside, doing things.”

A prolific songwriter, this new batch of songs came to him easily. “The best ones are ones that just happen all at once, where you get words and melody and lyrics all together,” he says. “On this album, a song like that would be ‘Down South.’ I was driving and saw the clouds and the Texas sky, and that just came to me. And then that song ‘The Cowboy and the Hot Air Balloon,’ which is the one moment of levity in the whole record.”

Doe has lived in Austin, Texas for about five years, and credits his life there with giving him new inspiration for his work. He chose that city because his partner is from there, and many of his musician friends had already moved there before him. “Austin has been very welcoming. It’s a really music-centric town. I do like being in Texas. It’s difficult with the nutcase Republican governor and attorney general. They are horrible. But who knows? Maybe we’ll kick them out.”

Doe takes being liberal-leaning in such a traditionally conservative state in stride. “I think it’s important for people to experience and be around people that they disagree with, because it’s up to you to have a civil discussion, even if people are losing their shit,” he reasons. “You have to stay calm. Or try to. It’s like, live and let live. People have lost that.”

For someone so identified with the Los Angeles music scene, it may seem startling to find Doe settled so firmly somewhere else – but in fact, he wasn’t a native Angelino, only moving there after growing up in Baltimore.

“I’m of a certain age that everybody wanted to be in a rock and roll band,” Doe says of his childhood. “The Doors and Janis Joplin and Jimi Hendrix and Cream came out when I was 14. Then all the English bands happened.” He also remembers listing to a lot of Motown and soul music. After that, wanting to become a musician himself “was a pretty easy decision. It seemed like, ‘That’s a cool job – I think I’ll do that.’ Not knowing that it’s really fuckin’ hard.”

He attended Antioch College Maryland where he built a foundation for his writing that remains vital to his work today. “I learned poetry from a great teacher [there] who I’m still in touch with,” he says. “Her name is Grace Cavalieri. She’s the Poet Laureate of Maryland now.” Along with a Cavalieri and a half dozen other Antioch alumni, Doe actively participates in a poetry group: “We have a Zoom call once a month and have to bring a poem.”

Doe credits Cavalieri with helping him gain confidence and understanding as a writer. “It was encouragement. It was her telling me, and then me telling myself, ‘Be true and be vulnerable and be economical.’ Then reading a bunch of other poets and song lyrics, and taking time and listening. If something strikes you, stop what you’re doing and write it down, because you think you’ll remember, but [if you don’t] it’ll be different – and it may not be better.”

After graduating, Doe headed to Los Angeles. “I was pretty sick of the East Coast – the weather and just the kind of negativity,” he admits to us. “Also, I had been to New York and seen Talking Heads and the Heartbreakers and some other bands in ’75, and it seemed like the New York scene was already pretty set. In the west, you could do anything you want and people were going to go, ‘Look at that.’”

He decided to make the transition from poet to musician “Because you would starve if you were a poet!” he says with a laugh.” In 1976, soon after his arrival in L.A., he met the people who would become his bandmates in X: guitarist Billy Zoom, drummer D.J. Bonebrake, and singer Exene Cervenka (to whom Doe was married for a few years).

X went on to become one of the most influential punk bands of all time. “We’re incredibly fortunate. Nothing was calculated,” Doe says of that band. With them, he still continues releasing albums and touring. (X will play The Rooftop at Pier 17 in New York City on July 15.)

For now, though, Doe is focused on his solo work, playing dates with his own band through June. At those shows, he plans to perform songs from this new album and his other solo releases, along with some X songs.

“This style of band is pretty adaptable and you can pick and choose songs that work. It’s got an edge but it’s kind of cool. It’s like a jazz combo, but it’s folky. I enjoy performing. It’s rewarding, and the energy exchange is like nothing else.”

Doe is pleased as he looks back on what he’s achieved with both X and his solo work. “As you get older, you have a lot more gratitude,” he says. “Unless you just become bitter, and that’s no fun!”

JOHN DOE’S NEW ALBUM, EL ROMANCE- 0, IS OUT NOW WHEREVER YOU LISTEN TO MUSIC! FOR TICKETS AND INFO ON HIS UPCOMING TOUR, CLICK HERE!