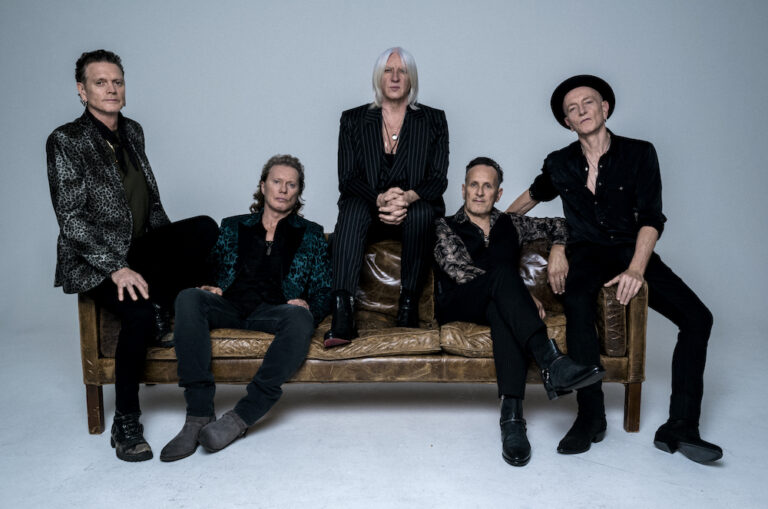 Def Leppard Still Has the Rhythm to Drive Us Crazy

Aging is inevitable. This is something that all of us know to be true – even Def Leppard’s gracious frontman, whose attitude, swagger, and ability to hit the highest of eighties rock notes has yet to waver.

It’s been seven years since Def Leppard’s last release, but the long wait for new music from the iconic hard rockers is recently (finally) over: Diamond Star Halos – their 12th studio album – came out on May 27. Following that up very soon has the band kicking off a summer arena tour with Mötley Crüe, Poison, and Joan Jett (with stops at Citi Field in New York on June 24 and Citizens Bank Park in Philadelphia on June 25). All of this, singer Joe Elliott says, is meant to bring joy to people during these dark times.

“The last thing that we wanted to do was make a ‘pandemic album,’” Elliott says during a recent Zoom video call. “Anybody that’s done that over the last couple of years, good for them, [but] it just wasn’t what we wanted to do. This album won’t keep dragging people back to 2020 with lyrical negativity regarding that whole situation.” Instead, he says, “We wanted to make a great Def Leppard record with uplifting melodies, uplifting lyrical hooks, big choruses – our thing.”

That’s not to say that the pandemic had no bearing on Diamond Star Halos. In fact, COVID-related lockdowns led the band to work remotely while writing and recording this album. In the past, they’d done small bits and pieces this way, but never attempted doing it for the entire process. Fortunately, Elliott tells The Aquarian that “it was a phenomenally positive experience – so much so that we’ve already sworn off ever going back to recording the normal way again.”

That “normal way,” for the past three decades, had been to gather the entire band in Dublin, Ireland, where Elliott owns a recording studio. This was no small undertaking, considering that the other members had to come from their homes in America and England. Working remotely meant everyone could stay with their families throughout the album’s creation.

It also, Elliott says, provided a jolt of renewed inspiration. “What making this album in lockdown gave us was a little bit more scope to put everything on the table and try anything – shake the tree a little bit more and see what kind of fruit falls off.” For example, “I had written a couple of songs on the piano – they weren’t written for any specific reason; I just wrote them for me. I do believe that in a different scenario where we were all in the same room, I might not have presented them [to the rest of the band], and they might not have been received the same way because we’d have just been in our normal routine.”

This album is a nod to the band members’ earliest influences, with the title itself pulled from a T. Rex lyric. “The ‘diamond star halo’ reference is something that we always say regarding the era of music that was our schooling,” Elliott explains, citing the period from ‘71 to ‘74 when everyone in Def Leppard was listening to glam rockers such as T. Rex, David Bowie, Slade, Mott the Hoople, and Queen. “That’s what put that spark of trying to write three minute epic anthems, because that’s what all those songs were that we grew up listening to.” With these 15 songs, the band let those influences show plainly, blended with their own distinctive, soaring sound.

Making Diamond Star Halos was so enjoyable and productive that the band only stopped writing and recording because they wanted to make sure this album was released in time for fans to familiarize themselves with it before Def Leppard hits the road again. It’s an opportunity to share new music with fans that wouldn’t have been possible if this tour had happened two years ago as originally planned before the pandemic delayed it.

“In 2020, we’d have been going out and playing our catalogue of hits and obscure B-sides and a couple of album tracks, that kind of thing. Now we get to do this tour, but play some of these new songs as well as the hits.”

Still, he promises that he and his Rock Hall-inducted bandmates won’t bombard people with new material at these shows. “This is a tour where people come to see what they know. I don’t think anybody in their right mind is ever going to go onstage in front of 60,000 people in a stadium in America and go, ‘We’re going to play our entire brand new record!’ But I think we can play two or three new songs.”

Making this album and touring are finally getting Elliott back to the frontman duties that he always felt destined to do. “I don’t want to sound like a complete wanker, but I think I was born to do it. I really was. Everybody says that from the second I could crawl, I crawled toward the radio. When I was three or four years old, I was mimicking Paul McCartney with a plastic guitar, singing every word to ‘Love Me Do.’ By the time I was a little taller I was singing into the vacuum cleaner because it looked like a microphone. I mean, I’ve always had this thing. I was fully obsessed.”

As it turns out, being musically inclined ran in Elliott’s family. “My mum bought a guitar from one of these catalog companies, paid for it on the weekly, taught herself to play, and I just sat there watching her fingers, mesmerized that this mother of mine, out of nowhere, could play all this Americana folk music,” he says. “I’m like, ‘I want to do that!’ Except I didn’t want to do Americana folk music – I wanted to do it like T-Rex.”

Elliott’s mother became his first guitar teacher. When he’d stuck with those lessons for a year, his parents bought him his own guitar, and he started writing his own songs. By the time he was in high school, he’d begun forming bands – and, in 1977, he became a founding member of Def Leppard.

The band went on to become one of the biggest hard rock acts of all time, with multiplatinum albums such as Pyromania (1983) and Hysteria (1987). Their many hits include “Photograph,” “Rock of Ages,” “Animal,” “Pour Some Sugar on Me,” “Hysteria,” “Love Bites,” “Let’s Get Rocked,” and other rhythmic, impassioned, era-defining head-bangers.

Still, Elliott says he doesn’t dwell on Def Leppard’s legacy. “It’s all about the now and talking about the future,” he declares. “I’m grateful and blessed to be where I am now, talking to you about a new record, all these years later. Because we are now in that very elitist category of maybe a couple of hundred artists in the history of the music industry that are in this position. So many of our peers fell by the wayside. They got tired, they got old, they lost the enthusiasm. We got old – you can’t help getting old. But you can help getting crap. Enthusiasm is down to the individual.”

“Will we ever beat our commercial peak, from a sales point of view? Probably not,” Elliott continues. “Have we written our best song ever? I don’t know. Maybe it’s on this new album. Maybe it is ‘Animal’ or ‘Photograph.’ Maybe it’s something that we’re going to write in five years’ time. All we do is just try. We just keep attempting to better ourselves, one way or another.”