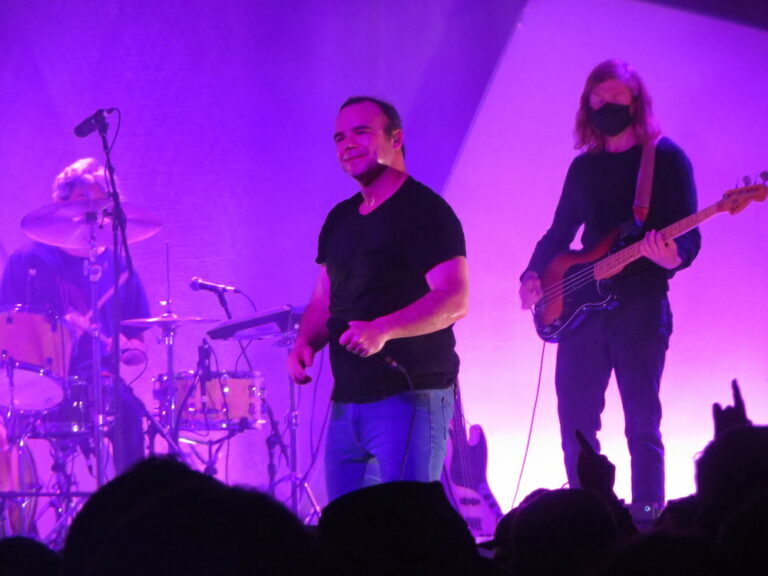 Sam Herring, vocalist in Future Islands, is a riveting performer on stage. At Brooklyn Steel on the first of three headlining dates, the audience frequently cooed and cheered as he twisted and squirmed his body, jumped in place, kicked high, flailed his arms, and made facial grimaces to punctuate his lyrics. While his band mates remained static in the background, the highly aerobic Herring used the rest of the stage to maximum effect.

Future Islands, presently consisting of Herring, keyboardist Gerrit Welmers, guitarist/bassist William Cashion, and percussionist Michael Lowry, formed from the remnants of the performance art band Art Lord & the Self-Portraits in 2006 in Baltimore, Maryland. Future Islands came to prominence in 2014 with its fourth album, Singles. The band released its sixth and most recent album, As Long as You Are, on October 9, 2020.

The concert at Brooklyn Steel featured seven songs from Future Island’s most current album along with a smattering of songs from all the earlier albums. In interviews, the bandmembers have stated that they reject the synth-pop brand, but this was the best description for the performance. Welmers’ dance-floor-ready synthesizer and Cashion’s uptempo bass and guitar parts were the catalyst for all the song’s grooves. The music sounded quite like 1980s new wave or new romantic music until Herring injected drama with his rich, deep vocals. Herring did not simply ride the wave; rather his melancholic delivery contrasted the joyful bounce of the music, and often even seemed to have its own cadence. The band played well, yet it was Herring’s husky, passionate brooding, crooning and shouting that took the songs to the next level.

Because of Herring’s highly expressive delivery, deciphering the lyrics live was challenging for those not familiar with the songs. The powerful emotive impact was impossible to overlook, however. Packaged with Herring’s animated presence, it was unlikely that anyone in the audience could take their eyes and hearts off of Herring for even a moment.