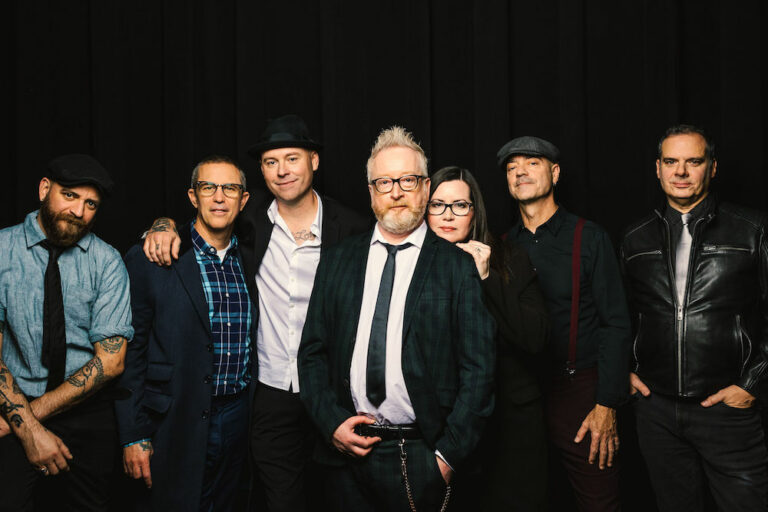 Flogging Molly’s anthemic, trail-blazing punk tunes have shaped the lives of many over the 25 plus years. With no signs of slowing down, as well as a keen ear for what they know they do best and what people love them for, the band is touring now with an aptly titled record on the way to follow that summer excitement up.

Since last summer, there have been quite a few supremely stacked tours going around all over the globe. Dual headliners with the openers being just as talented, they’re the kind of the shows that you show up early and stay late for. Los Angeles celtic punks Flogging Molly are currently leading one of these expeditions with fellow Angelenos, The Interrupters, alongside yet another California act, Tiger Army. London’s reggae punks The Skints are also along for the ride. They’ll be making a few stops in the area (including last week’s at The Mann Center in Philadelphia), and upcoming on June 30 at Pier 17 in New York City and July 3 at the Stone Pony Summer Stage in Asbury Park. (Flogging Molly are also going to be releasing their eighth album Anthem via Rise Records on September 9, so more to look forward to after the local shows!)

The Aquarian had a great conversation with vocalist and guitarist Dave King from Flogging Molly about a new song they just put out, the making of this upcoming album, having an ‘immediate’ approach to the songwriting, and what fans can expect from Anthem once its released.

Back on June 7, Flogging Molly released the single “The Croppy Boy ’98” off of the upcoming album Anthem. With the year attached to the title, is it an old song that got rediscovered?

The title is “The Croppy Boy” and it’s actually from 1798. It’s about the first attempt at a revolution in Ireland where the French were going to come over and help the Irish. The Croppy Boys were a bunch of Wexford men, which is ironic because that’s where Bridget Regan and I live in Ireland, and that’s where it started. They were men who shaved their heads for some reason while leaving a little tail down the back of their neck… for some reason they were called The Croppy Boys. I thought that was an absolutely amazing title. I was writing this song and it was starting to turn into a song about a man who was in love with a woman but it was a fight that he couldn’t win. It was his own personal fight, so I decided to call it “The Croppy Boy” but I gave it a little hint of the year by just adding in ‘98 as opposed to the whole date. It’s a brand new song I wrote that we love playing. It’s actually the first song we recorded on the new album and it’s completely live.

Speaking of that album, what was it like working with Steve Albini again? I know he’s done a few of your records so what was the experience with him at Electrical Audio in Chicago?

I’m so glad we went back to Steve. We did our first two albums with him – our first three albums are basically balls and I really wanted the band to go back to that. We needed to know what we were doing; the thing about Steve is that if you know what you want you’ll get what you want and that’s what we wanted again. We wanted to write the songs and arrange the songs because after all these years we should know by now how we want to sound, how we want to be heard and the way we want the energy to be derived from it. We got in our basement in Detroit where Bridget and I have a place and we basically hashed out 14 songs in 14 days.

Then we rehearsed them a little bit on the last tour and we ended up putting “The Croppy Boy ‘98” into the set because we loved playing it so much. We went into the studio really raw but we had a really good idea of the arrangements of the songs and the way we like them to be. It’s all a very live sounding record, every song has got at most probably five takes, at most. Usually it was just patch up jobs on the acoustic instruments and backing vocals and that was it. We knew that we wanted to get back to the old days but we couldn’t have done it if we hadn’t gone through the 20 years that we’ve been through since then. I think our experience of being on the road for so long meant we could actually go back and do this the way we really wanted to do it.

Yeah, but we couldn’t have gone full circle if we hadn’t learned what we had learned on the road and how we know each other now so well. I think that really helped a lot and it’s really the way Flogging Molly should be making albums.

How has it been performing with The Interrupters, Tiger Army, and The Skints so far?

It’s been going great, but unfortunately after the first night The Interrupters came down with COVID-19. Their first set with us since then was in Chicago the other night – they were out for over a week. The crowds have been amazing and very understanding because it is still really difficult touring through these times to be honest with you. We all have to stay in our own bubbles and all that but the crowds are amazing, The Skints have been amazing and Tiger Army have been amazing. Hopefully we won’t have to deal with COVID-19 on the road again and we’ll make it through to the end because we did miss having The Interrupters.

Bridget and I had the pleasure of meeting them before the tour – we had a good long chat and we were really, really looking forward to this. They were so devastated after the first night to come down with it and not to be able to continue for how many days. Hopefully they stay at full strength now and the tour stays at full strength.

Let’s hope it remains that way for the rest of it. This year marks 25 years since Flogging Molly started at the Los Angeles pub Molly Malone’s back in 1997, so what would you say is your favorite or proudest moment with this band?

It’s actually kind of longer than that because Bridget and I have been together since ‘94, which is even scarier! We were playing around a bit for a few years before but it was on and off. It’s been a long time but there have been so many proud moments. Having an album go in the top five of the Billboard charts was amazing, playing with The Rolling Stones was incredible, and there’s been so many things. Just the fact that we’re still doing it and still bringing out new albums, if you told us when we started that it would be like this now we would have said, “No, not in a billion years,” because it’s ridiculous. It’s still enjoyable, and different generations of people come to our shows which is probably the greatest thing. To see six-year-old kids, 10-year-old kids showing up with their parents and those parents are with their parents… the generations are just amazing.

I can totally see why and that’s something very special. Going back to the album, you’ve mentioned that Anthem has a live feel to it so what can fans expect when it comes out and what do you hope they take from it after giving it a listen?

I think the songs are very immediate in my opinion because they came together so quickly. There hasn’t been too much surgery, there hasn’t been too much looking in-depth. We were writing a song a day, and that’s the way we wanted it and that’s how we want people to hear it. These songs are very immediate, the way you hear them is the way they were written. There was no doctoring them up, they’re just the way they are.

It’s exciting for us to do it that way because we hadn’t really done it that way since our first three albums. It’s good to get back to basics, we wouldn’t have been able to do it if we hadn’t done it the way we’ve done it the last 20 or so years. Hopefully people are excited as we are, we had so much fucking fun doing it. I remember our drummer Mike Alonso when we finished recording with Steve Albini – he’s been in many, many bands – and he said that this was undoubtedly the best time he ever had making an album. It was incredible and hopefully the fans will feel that.

FOR TICKETS TO SEE FLOGGING MOLLY AND THE INTERRUPTERS’ CO-HEADLINING TOUR, INCLUDING THEIR NYC AND NJ DATES, CLICK HERE!