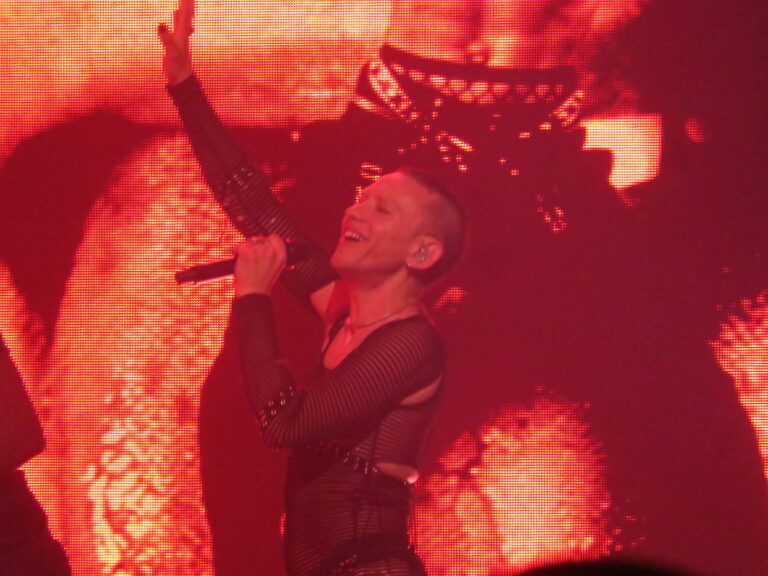 After a series of commercial hit songs in the United Kingdom, Years & Years has begun to gain traction in the United States. Years & Years formed in 2010 in London, England, soon enlisted Olly Alexander as lead vocalist, and some 10 years later evolved into Alexander’s solo project. At the Great Hall at Avant Gardner, Alexander performed with touring musicians, backup vocalists, and backing tracks. The Night Call Tour is promoting Years & Years’ third and most recent album, Night Call, released on January 21.

Alexander is gay and writes songs about gay relationships, embracing sensuality, and sexuality. He increasingly is wrapping these message in pulsing, danceable pop music. At Avant Gardner, some of these performances were backed by videos celebrating an uninhibited liberation that could not have been mainstream in the 1980s. Alexander’s sexy stage wardrobe silently made a similar statement.

Years & Years’ performance began with a video showing him running to a public telephone booth in the dark of night. This led to a shortened live version of the title track of Night Call, a song in which he suggestively expressed his hopeful anticipation of a late night rendezvous. Throughout the evening, Alexander balanced gang vocals on rubbery dance-floor bangers with delicate croons on slower, soulful pop ballads. All the while, he paced the stage, swiveled his hips, and periodically joined in synchronized moves with his backing vocalists. Only towards the end of the performance, he slowed the energy to perform two songs seated at an electric piano.

With intermittent close-ups across the large screen behind him, Alexander frequently seemed larger than life. Blessed with a magnetic charisma, Alexander commanded attention at all times, even when he sat out a song to allow his trio of backup vocalists to sing “Here” without him. The musicians, dressed in black along the back wall, remained virtually invisible.

The well-calculated stage work paid off, as Years & Years remained consistently entertaining throughout the show. The weak link was that the songs were sweet, but regrettably unremarkable. While some of the musical arrangements opened with sparse and intriguing arrangements, they led to common and predictable melodies and bridges. Years & Years may reach the larger mainstream American audience by reducing the emphasis on the repetitious club beats and bringing forward more lead instruments.