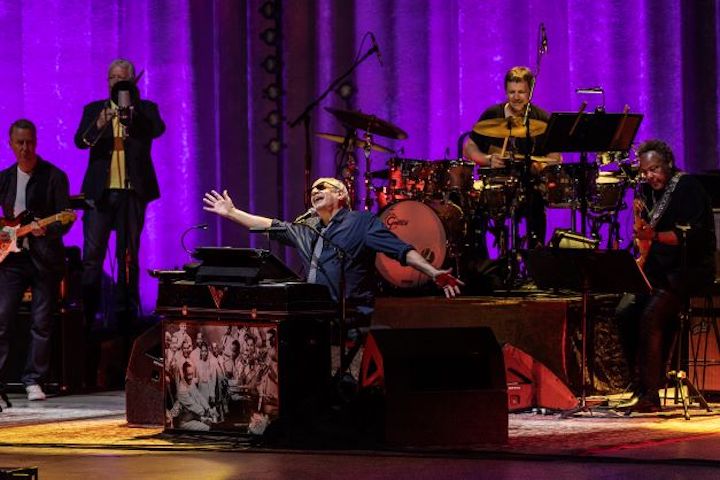 Courtesy of Bethel Woods Center for the Arts

In 1969, my 18-year old self sat at the Woodstock festival, dazed and confused due to the brown acid I had just ingested and loving every minute of it. The stage-side warning came too late and I remember shouting out, “Oh shit! I just took it!” 53 years later, at 71, I sat on those same grounds, still dazed and confused due to the medical marijuana I had just ingested, loving every minute of Steely Dan’s two hour, 18-song-long performance. This time I got my dope from the Commonwealth of Pennsylvania. There was something magical about seeing a concert at the Bethel Woods Center for the Arts. This beautiful open-air venue is on the exact same spot where once hero farmer Max Yasgur let us play that fateful August weekend, 500,000 strong, on his land. Now there’s a museum there commemorating the event.

I had been there in 2019, on a book tour for my 50th Anniversary Woodstock: Back To Yasgur’s Farm book, cavorting in the author’s tent with my fellow Woodstock authors when the exact same monsoon that hit us with such ferocity in ’69, hit the exact same geographical locale on the exact same day, August 18, on almost the exact same hour 50 years later. We had to be evacuated before the tent collapsed all around us – amazing but true.

I digress. Steely Dan’s sound was spectacular on July 3. The horn section is the best damn rock and roll horn section on the planet (tied with the Asbury Jukes horn section). Drummer Keith Carlock is a monster. Bassist “Ready” Freddie Washington pops that thing like Larry Graham in Sly & The Family Stone. Jon Herrington totally dazzles on lead guitar. They’ve even added a second lead guitarist in Adam Rogers. Hate to say it but the band is more of a well-oiled machine since the passing of Walter Becker.  The Danettes feature vocalist Catherine Russell who just happens to have a superb album out of her own called Send For Me.

A larger-than-life cross between Ray Charles and Jack Kerouac, the band is only as good as his voice on any given night, and, on this night, he was superb. With minor changes, they’ve been doing the same set for years and it never fails to connect:  “Hey 19,” “My Old School,” “Black Friday,” “Aja,” “Babylon Sisters,” “Bodhisattva,” “Dirty Work,” “Peg,” “Reelin’ In The Years,” and “Kid Charlemagne” never sounded better. Surprises included “Green Flower Street” from his 1982 solo effort, The Nightfly, and a swinging cover of The Crusaders’ 1998 “Keep That Same Old Feeling.”

Perhaps the biggest surprise of all was how great the opening act was. The Dave Stryker Trio had the guitarist ably accompanied by organist Jared Gold and drummer McClenty Hunter. Their arrangements of two 1972 soul classics – The Temptations’ “Papa Was A Rolling Stone” and Curtis Mayfield’s “Pusherman – were meandering journeys through funk, fusion, jazz, and rock with chops to spare.

Upcoming at the Bethel Woods Center for the Arts are Alanis Morissette and Garbage. tonight, July 19, Dave Matthews Band on July 20, Phish on July 22 and 23, Backstreet Boys on July 24, Norah Jones and Regina Spector on July 30, Jimmy Buffett on August 4, Harry Potter And The Sorcerer’s Stone In Concert with the New Jersey Symphony on August 6, Foreigner on August 7, Willie Nelson/ZZ Top on August 13, Buddy Guy on August 14, Brandi Carlile on August 19, and Phil Lesh & The Midnight Ramble Band on August 20.