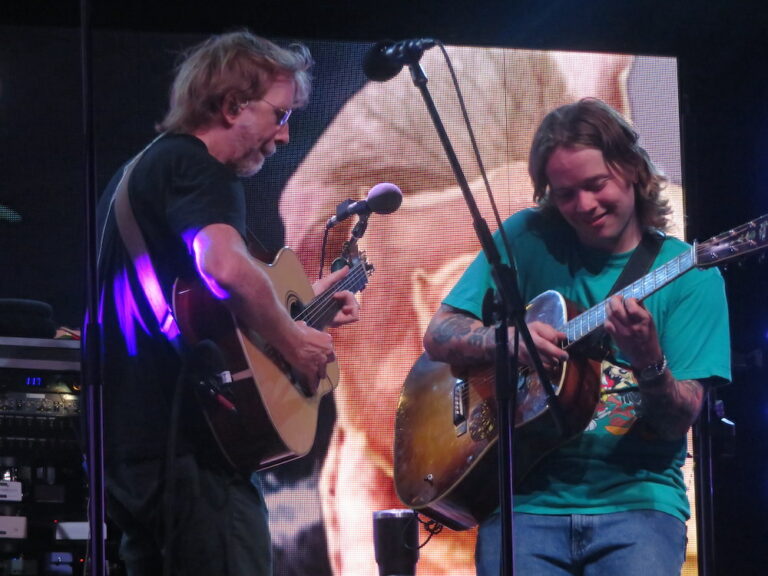 Billy Strings is the hottest artist to happen in bluegrass in decades. Perhaps that happened because the 29-year-old guitarist remains true to purist Americana while also experimenting with offbeat sources.

Born William Apostol in Lansing, Michigan and raised in Morehead, Kentucky, as well as Muir, Michigan, he learned about bluegrass as a boy from his musician stepfather. An aunt nicknamed him Billy Strings after seeing his virtuosity on multiple instruments. In his teens, he played in hard rock and indie rock bands, but his path in bluegrass was set in 2012 when Don Julin, a mandolin player from Traverse City, Michigan, invited Strings to play guitar in his touring band.

At the Rooftop at Pier 17, Strings surrounded himself with an all-acoustic, all-stringed ensemble. Billy Failing (banjo), Royal Masat (bass), Jarrod Walker (mandolin), and Alex Hargreaves (fiddle) accompanied Strings for the entire two-set performance. During Strings’ second set at the Rooftop at Pier 17, Phish’s Trey Anastasio joined for five songs – more about that in a minute.

Strings and his band started the evening as many bluegrass bands do, with each member taking a turn under the spotlight while picking a stringed instrument at the speed of light. As if watching a locomotive whiz by, a listener could feel dizzy even after one song. Sung verses and choruses, and even the brief pauses between songs, served as breathers before Strings’ lightning-quick players repeated the magic.

The first set began with songs from Strings’ third and most recent album, 2021’s Renewal, before turning to songs from his two earlier albums. As the musicians on stage looked beyond the fans in the outdoor venue to Wall Street along the Manhattan skyline, Strings cleverly paired his “Watch It Fall” with a cover of John Hartford’s “In Tall Buildings.” In the first song, Strings sang “Well, the old man said the great Big Apple’s rotten to the core, with Wall Street skimming from the till while no one minds the store, and how could someone get so low in a building so damn tall?” He then continued the theme with Hartford’s lyrics, “Someday, my baby, when I am a man, and others have taught me the best that they can, they’ll sell me a suit then cut off my hair and send me to work in tall buildings.” (Perhaps the lyrics would have been particularly poignant if he had sung the two songs in reverse order.)

As the first set evolved, Strings revealed that he is more than a bluegrass musician. Aided by flashing lights and moving images on the large LED screens behind the musicians, Strings and company took a more psychedelic turn on his original song, “Home.” Strings utilized electronic sustain pedals at his feet, making his acoustic guitar sound like an electric guitar. He and his band then extended the trippy sound further while covering Pink Floyd’s “Fearless.”

The second set began much the same as the first. The musicians honed in on traditional bluegrass structures and extended improvisations on the guitar, fiddle, banjo and mandolin, both on original songs and covers. “Must Be Seven” and “Meet Me at the Creek” once again featured jams and also stretched the customary parameters of bluegrass.

At about 9:15 p.m., Strings introduced Anastasio, who came center stage and played guitar and sang with Strings and company until the 10:00 p.m. curfew. The combination was a bit odd in that the band members continued to pick their instruments at lightning speed, which is not at all Anastasio’s style or forté. Anastasio’s presence impacted the set list. The six-song collaboration began with Phish’s “Back on the Train,” which Strings has covered in the past even when Anastasio was not present. The mini-set also included Bill Monroe’s “I’m Blue, I’m Lonesome,” which Phish used to cover in acoustic form in the mid-1990s, and closed with “Gotta Jibboo,” usually heard at Phish and Trey Anastasio Band concerts. The set did not turn into the Trey show, however. Anastasio sang and jammed with the band and had many spotlight moments, but he also stepped back and let the others shine. The audience was most enthusiastic whenever Anastasio and Strings shredded on back-to-back leads.

Billy Strings and his band will spend the rest of 2022 on the road. They will return to the New York area for the Sea. Hear. Now. festival in Asbury Park on September 17. Strings also will headline the Nassau Veterans Memorial Coliseum on November 11. That date might be the first time a bluegrass artist headlines a local sports arena.