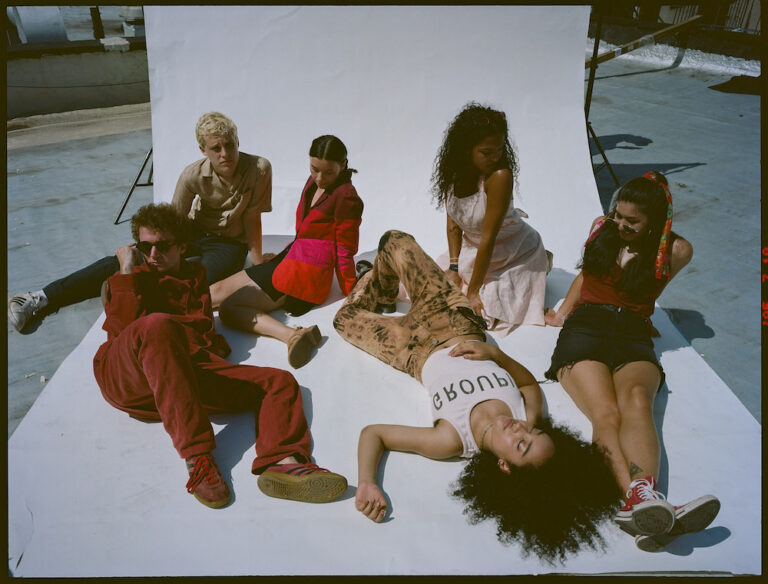 MICHELLE Tackles Tough Topics in the Name of ‘Pure Pleasure’

A melting pot of sights and sounds, a cultivated space for creativity, and an open-minded approach illustrious artistry – this could be the definition for two things: the Big Apple, or, in this case, MICHELLE.

Six-piece R&B outfit MICHELLE (Layla Ku, Sofia D’Angelo, Julian Kaufman, Charlie Kilgore, Jamee Lockard, and Emma Lee) are ready to dominate New York City with their Stevie Wonder-influenced jams and their much talked about lyrics, of which tackle everything from relationships (See After Dinner We Talk Dreams), race (“FYO”), and sex (“Syncopate”). There’s even more explored in their music, too, so let’s just say the band touches on topics that your mother and father didn’t have to (or want to) when growing up. What may have been considered taboo topics to talk about 20-some years ago, these young talents aren’t ashamed to bring to the forefront in today’s music scene.

The band members met in early 2018, just under five years ago, but it wasn’t until later that they were all in one room together. “Julian and Charlie met through a mutual friend in 2018. They decided to make an album. They wanted some of the cool people that they knew to help sing and write on the album. Us four ladies had known Julian and Charlie from different parts of our lives via school or via the New York City music scene. We would go to Julian’s apartment on different days to record our first album, Heatwave. That was mid-June 2018. Our album came out that September. At that point we have not all been in a room together, but our first performance was in November of that year,” explains D’Angelo.

The sextet write and sing about tough topics that are difficult to talk about, and they have done that since back then. MICHELLE cover these topics even more strongly on their latest album, After Dinner We Talk Dreams. “Every good song should be slightly subversive,” says Kaufman.

“I think we draw inspiration from our own lives and lived experiences,” adds Lockard.

“The cool thing about the collaborative process is that we can help each other flesh out the meaning of those experiences. Maybe Jamee went through something but bounces it off of me, Charlie, and Julian. Then maybe we could put it through a relatable lens that is still personal, but not directly seen through only one person because of the experiences shared amongst many,” D’Angelo continues.

They write fluidly together and share moments big and small through one another. “This crazy thing happened to me, so if another person in the band experienced the same thing, then that’s our first and second verse right there,” says Kilgore.

With two albums and one EP done already, it’s clear they know what they’re doing and what they’re capable of. Through our conversation, on top of the music itself, you can tell that the band is very mature for their ages; as they also know what topics to sing about and how to lean on each other for support. They definitely had a growth spurt since 2018’s Heatwave in the incredibly amount of a short time span that it was, too. “After Dinner We Talk Dreams is a bit of a time capsule of our teenage years and growing up into our early twenties. It encapsulates that coming of age,” notes Lockard.

“It’s an album that took very long to make. I think it features all of our different versions of ourselves,” Kilgore pops in to add.

“Sea Shanty” and “Fool 4 U” are featured on After Dinner We Talk Dreams: The Side Dishes and are two new songs that were just released but had been written in November 2020. Some think it’s here now to possibly quench their audience’s appetite until a new album is released. Although these new tracks fit the same vibe as the full-length, but that makes sense as Lee explains how “those songs were written in the same sessions as After Dinner We Talk Dreams.”

MICHELLE is known for their eclectic line up, with a POC and LGBTQ background. Billboard recently named After Dinner We Talk Dreams one of the best ‘pride’ albums of 2022, which is a great achievement for a relatively new, but extremely representative band. “That just means a lot to us,” Lockard admits. “It feels great our career identity validated by someone other than ourselves.  It feels great that people can listen to our music, hear it, and feel included and see themselves them in it.”

“Whether or not it’s common to talk about the topics we sing about in pop culture, these our elements of our lives. Parts of our experiences are going to slip through. As queer people that’s the world we live in and it’s cool that other people can dig that,” Kilgore says.

The group isn’t shy when making music – as long as it doesn’t sound dated. Their sound tips their hats to Stevie Wonder, which is an influence that they cherish. One can definitely find a seventies-era R&B and Motown throwback in their work, which most people can, and do, appreciate. “The answer to making music that has longevity [like Stevie Wonder] is making music that feels of the present moment. If you make retro music in the present, that ages really badly. Ten years from then, it may be grouped in a trend. If you make music that feels of your moment it will have a level of nostalgia instead of having it feel worn out,” explains Kaufman.

Up next, the band is gearing up for their first headlining tour called The Lavender Tour and is hitting the Midwest and West Coast soon with more merch, more choreography, and an awesome opener.  Kilgore hints, “Prepare for something a lot better. Pure pleasure and nothing less.”

The band’s creative side will be illustrated in a gallery event surrounding their album. “We are running a Gallery Event in the city from July 29-31 that will feature the original cover arts from our album and singles, interactive dream experiences, illustrated linear notes, work from our friends. If you want to interact with the music of the world of After Dinner We Talk Dreams in a new way, it will be up at Chinatown Soup 16 Orchard Street,” Lee tacks on.

MICHELLE also is set to play a free show to the public in Hudson Yards this very afternoon as part of Hudson Yards Free Summer Concert Series. Get your information on that right here, right now.