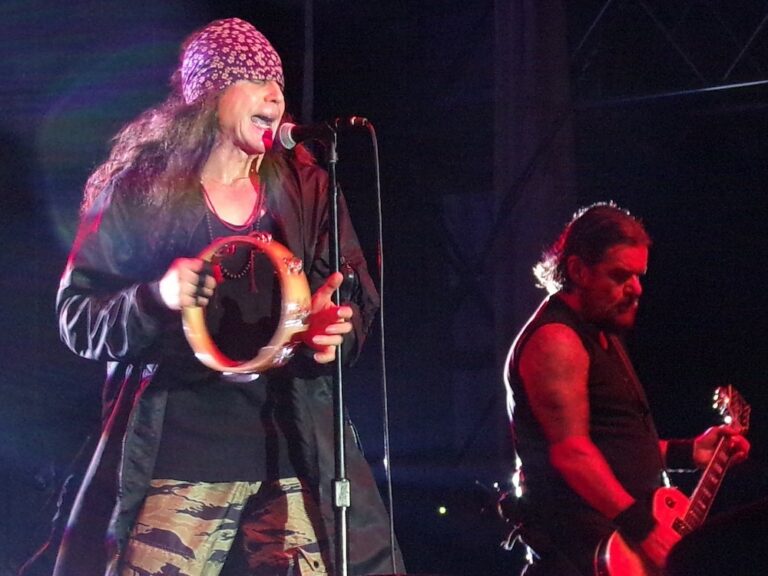 Since forming the Cult in 1983 in West Yorkshire, England, vocalist Ian Astbury and guitarist Billy Duffy have had a love/hate relationship, repeatedly splitting apart the Cult and then reuniting with a new rhythm section. Astbury and Duffy seem to be committed to working together these days, while working with a series of ancillary musicians. Drummer John Tempesta has played in the Cult since its 2006 reunion, keyboardist Damon Fox joined in 2015, and bassist Charlie Jones is the newest member, recruited earlier this year. That is to say that Astbury’s hyper-masculine vocals and Duffy’s stinging guitar leads and riffs are the crux of everything Cult.

The We Own the Night Tour came to the outdoor Rooftop at Pier 17 in the midst of a week-long New York City heatwave. Although every few years the Cult embarks on an international concert tour, the band has depended largely on its catalog for live content. Six years have passed since the band released any new material. Under the Midnight Sun, the band’s 11th studio album, will be released on October 7.

Otherwise, the Cult’s set drew primarily from three vintage albums, 1985’s Love, 1987’s Electric, and 1989’s Sonic Temple, plus the evening’s opening song, “Rise,” from 2001’s Beyond Good and Evil. Ironically, perhaps, the Cult did not acknowledge the three albums recorded since the 2006 reunion; these albums were not as commercially successful as the earlier albums anyway. Hence, the 2022 concert set list was similar to what the band performed live in 1989.

Astbury’s deep, relaxed vocals often seemed to channel Jim Morrison, but with a scarf wrapped around his head at this concert, the Cult invoked closer comparisons to Guns N’ Roses than the Doors. Astbury was ever the band’s showboat, egging the audience to demonstrate more enthusiasm and participation. Frequently, he held his hand in the air as a signal for a roadie to toss him a tambourine, which he hit inaudible to anyone but himself, until he dropped it on the ground behind him or handed to a fan along the front barricade.

Astbury’s vocals were outstandingly strong. As his vocals trailed off at the end of a verse or chorus, Duffy then captured the spotlight with impressively clean and clear leads. Throughout the performance, Duffy’s extended leads reminded the audience that the Cult was an innovative hard rock band, not a classic formula radio band. The other musicians supplemented well, but the exchange between Astbury and Duffy was uber-dynamic and gripping.

The Cult’s current tour takes the band throughout the United States right up to the October release of Under the Midnight Sun, followed by a date in Mexico. Perhaps by then the show will include more new songs. If not, it is possible that the Cult may return next year to really promote the album.