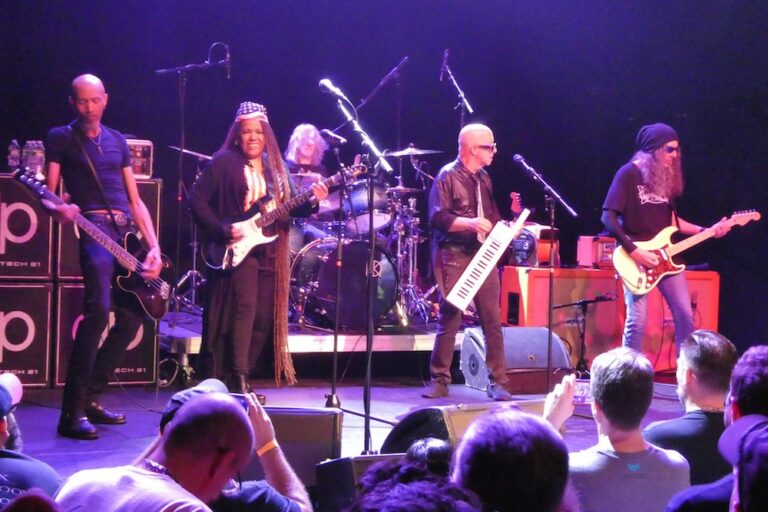 King’s X fans are among rock music’s most intensely faithful fans, sustaining the marginally-known progressive hard rock trio since its first album in 1988. Even after 43 years together, King’s X tours and headlines, at best, modest 500-capacity venues. Nevertheless, King’s X fans are rabid and return to see the band’s performances year after year, even when the band has no new music to showcase.

On September 2, King’s X will release Three Sides of One. The album will be the band’s 13th studio album and its first new album in 14 years. Whether or not the new album attracts new fans, King’s X can count on its longtime fans to continue supporting the band.

The attraction to King’s X is the talented musicianship and the intriguing compositional arrangements. Vocalist and bassist Doug Pinnick, drummer Jerry Gaskill and guitarist Ty Tabor have rocked together since 1980, creating ingenuous hard rock while making no compromises for commercial success. The power trio broke into the mainstream briefly around 1990, getting minimal MTV and radio exposure with “Over My Head”,  “It’s Love” and a few other songs. Another track, the funk-rock “We Were Born to Be Loved”, enjoyed a long life on The Late Show with David Letterman as a commercial bumper instrumental favorite of Paul Shaffer’s CBS Orchestra. These sporadic exposures were never to gain the band its core audience, however.

At the Gramercy Theatre, King’s X began its set with “Groove Machine,” a song title that in part described the band’s music. With Gaskill providing a steady, crashing backbeat, Pinnick sang in a rich, husky voice and, within two minutes, Tabor’s crunching riffs led to innovative, stinging leads. Similar structures continued for the remainder of the set. The axis of the band was three musicians locking into a heavy groove yet all three playing as if the songs depended on their singular contribution. No one ever played backup.

The set list reached back to the first album and visited almost every subsequent album. The song selection favored deep album cuts rather than the more obvious favorites. “King,” “Over My Head,” “It’s Love,” and “Black Flag” were omitted, any of which would have sent the fans home happier. The fans did get several old favorites, however, including “Dogman,” “Pray,” and “Go Tell Somebody.”

The set also debuted three songs from the band’s forthcoming album. Presented as a block midway through the performance, the trio performed two songs that in recent weeks have been released as lead singles, “Let It Rain” and “Give It Up.” The third new song, “All God’s Children,” was unique in that it was a rare song featuring Tabor as lead vocalist. The songs were faithful to the signature King’s X sound – soulful vocals, steaming guitar riffs and leads, and hard-driving rhythms.

The main set climaxed and ended with a surprise appearance by two ardent King’s X fans. Paul Shaffer and Felicia Collins of the CBS Orchestra both jammed with King’s X on stage for “We Were Born to Be Loved.” Shaffer played a small keytar, Collins played electric guitar, and both sang the title refrain at the hook.

King’s X ended the concert in dramatic fashion. The band turned the microphones in the direction of the audience and played the instrumental portion as the audience loudly sang “Goldilox.” The concert ended with the audience proving its merit as massive fans and supporters of an outstanding rock trio, King’s X.