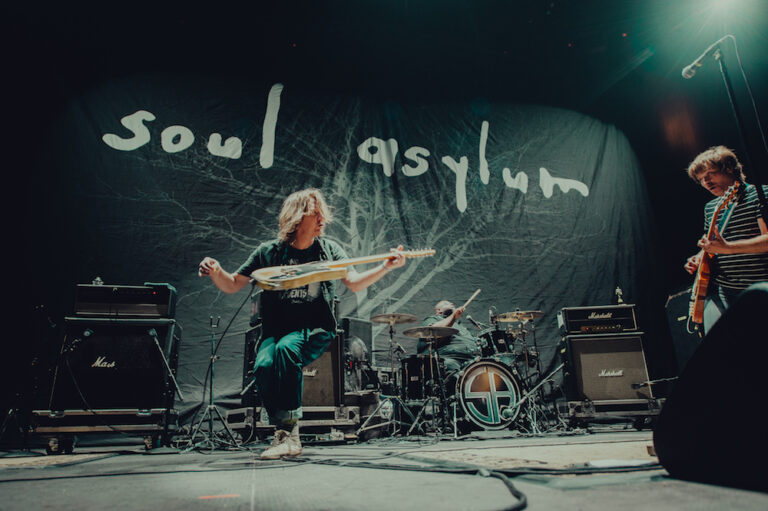 Soul Asylum were part of an amazing chunk of rock music history on the Minneapolis-based indie label TwinTone Records with The Replacements, Babes in Toyland, The Jayhawks and a bunch of other great acts. Then in Majorlabelland, they went on to accomplish even more, including a Grammy for the 1993 hit “Runaway Train.”

The band’s greatest accomplishment, however, is that they’re still together after 41 years. Founder and sole original member Dave Pirner wouldn’t have it any other way.

Soul Asylum were part of an amazing part of music history on TwinTone Records with The Replacements, Babes in Toyland, The Jayhawks and a bunch of other great acts. What about that part of your career did you like most and like least and why?

I was roommates with two of The Jayhawks. We were connected to a group of friends. That was who I hung out with all the time. So I suppose I miss the innocence of it a little bit. I miss not knowing what you’re doing, not having an expectation how it could be, of not being sure how it should be I suppose. We were just young and optimistic.

Did Soul Asylum and fellow Minneapolis rockers The Replacements and The Jayhawks influence and/or inspire each other in any way?

Yes and no. Husker Du was the other band we ran with. They had a different esthetic, much more do-it-yourself. I didn’t meet The Jayhawks until a little bit later. The music they were playing wasn’t something that influenced me because it wasn’t punk rock. Husker Du and The Replacements were just a little bit older than us so they kind of went first. They got the major label deal, and we could see how that was going for them. Whatever the case may be, there was a lot of it all happening at the same time. You do your thing. Everybody kind of influenced each other while trying to do their own thing.

You won the Grammy in 1993 for ‘Runaway Train.’ Is that Soul Asylum’s greatest accomplishment or is there something even better?

I don’t know what that signifies. I think the records are great. Gigs and touring are great accomplishments. Probably that we’re still here, still doing it is the greatest accomplishment.

The Replacements and so many other pioneering alternative-rock acts have long since broken up, yet Soul Asylum have remained a band for nearly 40 years, longer if you include Loud Fast Rules’ formation in 1981. How and why have Soul Asylum stayed together, and why have you not pursued more of a solo career?

I did a solo record. It was great experience for me. I like being in a band. I don’t like being a solo artist. I don’t really understand it. It gave me an opportunity to play with different musicians, and I hadn’t done that until then. That was great. It really let me sort of stretch out, see what else was out there, and try new things. But when I came back to Soul Asylum, it was like putting on a real comfortable pair of jeans. It suits me better to be in a band. I like that it’s not just me. It’s more like a gang or a team or something. So the way things unravel is kind of real special. These guys, I couldn’t be happier with: Michael and Jeremy and Ryan. They’re fucking amazing!

So it’s very staggered. Good shit happens and bad shit – when people quit, and when they get fired. There were always moments, where I would think, ‘This is the end,’ and then Michael would say, ‘We can get another guitar player.’ And I’d be like, ‘Shit, you’re right.’ We’d find a guy who really clicks. I don’t see any reason for the band not to stick around.

The pandemic canceled your 2020 tour, but you and Ryan streamed weekly on Facebook. When will the new songs you performed appear on your next album, when that will be recorded and released, and will that be on Blue Elan Records, like your last album, or a different label?

We’re working on about 30 songs. Everybody in the band is a producer. Not to make it sound corny, but the inmates have taken over the asylum. We’re going to try to make records by ourselves. We’re still working with Blue Elan. We’re going to be recording, but not really sure when. We have too many songs. That’s not a bad problem to have. ‘A Beautiful Problem,’ that’s what we’ll call the next record.

We did an acoustic tour, played two hours, and didn’t realize it. To move forward with the band being productive, I have to write new songs.

People will bring up songs I’ve forgotten about. I’ll be like, ‘I forgot all about that song. It’s a really good song. Well, we could play it.’ We have a whole bunch of outtakes. People will ask, ‘How come you didn’t put that song on a record?’

We just did an acoustic tour on the East Coast. Me and Ryan are pretty compatible. I was surprised by the reaction.

We probably played 100 original songs during the pandemic. It gave me something to do while I was in quarantine. People responded well. I guess I was slow to take advantage of the Internet.

I think that my goal is to make a harder record. The last record was more acoustic. This one will be more electric for whatever that’s worth.

My book (Loud Fast Words: Soul Asylum Collected Lyrics) came out right when the pandemic hit. I didn’t have time to promote it, get the word out.

I wanted the lyrics to the songs to tell the stories. It does. It’s chronological. For me, I can see the songwriting developing. That’s kind of interesting. It’s hard for me to imagine what another person would gather from the book. People seem to like the narration, how and where the songs were written and things like that. Mostly, it’s just about the lyrics.

FOR ALL THINGS SOUL ASYLUM, VISIT THEIR WEBSITE! FOR TICKETS TO THEIR AUGUST 18 SHOW IN NEW JERSEY, CLICK HERE!