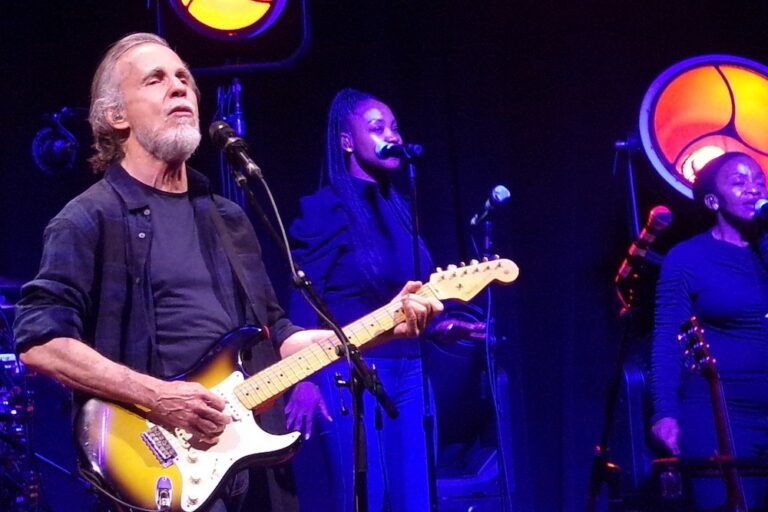 Jackson Browne said at his Beacon Theatre concert that he loves playing the venue – even though he caught COVID there. Indeed, after performing at the Love Rocks NYC benefit concert in March 2020, he became one of the first music celebrities who publicly discussed his bout with the then-new and deadly coronavirus. Two years later, he returned to the hallowed hall to headline four performances, each evening playing two-and-a-half hours with no support act.

The “An Evening with” format allowed Browne a significant amount of bandwidth. Although he noted that his first album was celebrating its 50th anniversary this year, he did not dwell there. The program balanced many of his most familiar songs from throughout the 1970s with numerous non-hits from his more recent catalog. This included four songs from Browne’s 15th and most recent studio album, Downhill from Everywhere, which he released July 23, 2021, his first new collection in seven years.

Browne has aged extraordinarily well. At age 73, Browne’s slender body and tender vocals were in excellent and enviable shape, as stately as they were those five decades past. Whether bouncing around the stage with his guitar strapped over his shoulder or sitting at the piano, he remained intensely connected to his performance and his arrangements. Remarkably, his vocal pipes have collected no rust, as he crooned smoothly on “These Days” and rocked vibrantly to “Doctor My Eyes.” As impressive as he sounded, his razor-sharp band deserves credit for injecting fine textures, from gospel to country, to the tapestry.

The concert had many highlights. The show began with a banging live version of his biggest hit, 1982’s “Somebody’s Baby” from the Fast Times at Ridgemont High soundtrack. Steven Van Zandt’s “I am a Patriot,” which Browne first covered in 1989, was particularly riveting considering today’s political and social turmoil. The final encore of “The Load-Out” leading into the cover of “Stay” never fails to please.

The musical peaks included “Take It Easy,” a song that he co-wrote with the late Glenn Frey for the Eagles. Browne long ago retired the song from his live set, yet he revived it on this night. The new live version sounded more like the Eagles’ lively hit than Browne’s version on his second album, 1973’s For Everyman. Additionally, on that album, the song segued without break into the second track, “Our Lady of the Well.” Browne and his band did the same at the Beacon Theatre.

When Browne last performed a stretch of concerts at the Beacon Theatre in 2019, he introduced “A Human Touch,” a song he co-wrote with Leslie Mendelson and Steve McEwan for a documentary about the San Francisco General Hospital AIDS ward in the 1980s. As Browne did in 2019, he did in 2022. Browne introduced Mendelson to his audience and the two sang the song as a duet.

Throughout the evening, Browne’s relaxed and personable stature lent a friendly intimacy to the performance. Rather than rushing into the next song without speaking, Browne frequently paused to relate anecdotes about the compositions, especially early in the set. The newer songs in particular revealed his other role as a prominent political and social activist. For instance, the title track of his most recent album professed his environmental concerts for the ocean, which he explained in his introduction was literally downhill from everywhere.

Browne’s induction into the Rock and Roll Hall of Fame by Bruce Springsteen in 2004 and into the Songwriters Hall of Fame on 2007 attested to the viability of Browne’s music in the 21st century. Not only is Browne still a solid composer and performer, his generosity in performing countless benefits for worthy causes and his optimistic cries for social and environmental justice are heralds in a complicated era. Admirably, Browne strives to make the world a better place for us all. Long live Jackson Browne.