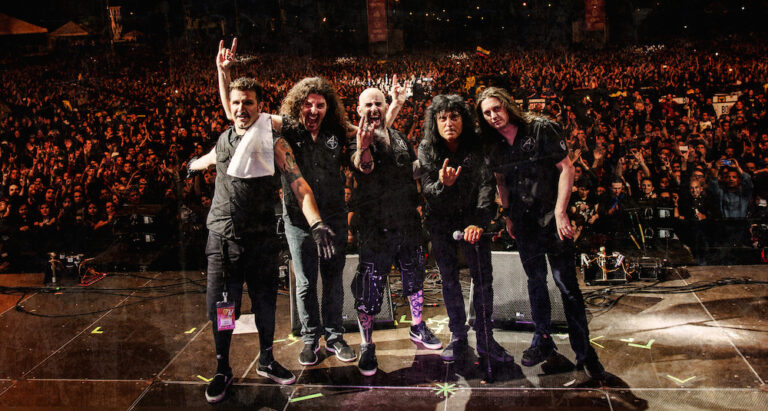 Catching up with two-thirds of the arguably the biggest metal tour of the year meant diving deep into these shows that are a joyous celebration of live music and kinship between bands and fans; as well as the groups themselves who are all long-time friends.

Anthrax is celebrating its 40th anniversary on their first full American tour since the onset of the pandemic. They just released Anthrax XL, a Blu-ray/2CD of the band’s 2021 livestream performance. The set is an absolute fan’s delight, spanning Anthrax’s history, from debut Fistful of Metal to For All Kings, its latest album. Features include renditions of rarely-performed tunes like “Aftershock” and “Keep it in the Family.” There’s also bonus footage of the band rehearsing and Scott Ian’s Anthrax-centric, New York City walking tour.

Anthrax’s performance is tight and full of crunchy thrash and classic riffs and solos courtesy of guitarists Ian and Jonathan Donais. Vocalist Joey Belladonna brings his melodic yet heavy vocals full-force, Frank Bello delivers solid, complex bass lines, and drummer Charlie Benante, one of the top sticksmen in the business, propels the band to skyscraper heights.

Their joint rock tour with stunning supporters Hatebreed stops at the Coney Island Amphitheater on Friday, August 26, so take a wild ride on the Cyclone and enjoy an equally thrilling metal experience.

Frank, you’re on your first full American tour since the onset of the pandemic. Did it take a while to get used to being on the road again after three years off? JD, is this your first extended tour as well?

Frank Bello: It’s a surreal feeling but we’re getting into a groove now. Let me tell you, honestly, it was very weird coming onto a tour because one-off shows, which we’ve done, are different. Now it’s show to show to show and it takes a couple of shows to get into that whole vibe and rhythm of a tour. Getting in the bus and traveling to the next show and setting up? I had some butterflies. Anthrax never rehearses and we rehearsed a couple of days for this. There was a nervous excitement for the first show but after the first couple of songs it was gone. Touring again is very welcoming. It’s great. We’re all getting back to normal. It’s also great because I can watch my friends play these shows, which is awesome. I watch Hatebreed, I watch BLS. It’s been so long and it’s an amazing thing.

John “JD” DeServio: We did go out last year in October and November. That was our first time getting back into it. That was with Obituary. We had so much fun. No matter how much time off you had, once you start jamming, it’s on [and] it’s amazing. It was great to be back but having time off the road wasn’t bad either. Throughout the pandemic we released a boxset, we did some videos, we recorded a new record – we were busy so it wasn’t that bad. We did some American stuff earlier this year and now we’re doing this run with our buddies and it’s unbelievable.

Have your bands been friends for a while?

Frank: I have to tell you, we’re all friends. This tour is a bunch of old-school friends. That’s what makes it very comfortable for everybody. There’s a lot of characters on this tour. Everybody is a great character. I’ve known Zakk quite a long time. The first time I met him was in 1988 when we were opening for Ozzy [Osbourne]. Just seeing him grow into the artist that he is, look… we all know how great he is. It’s just fun to watch this consistently. BLS is a great band. This whole tour has great bands on it – and talent. f you’ve watched Zakk Wylde play a lead, he’s got his own thing that’s incredible. A guitar legend onstage is fun to watch.

JD: You know what’s funny? I actually met Anthrax on that tour in ‘88. I was going to Berklee (College of Music in Boston) and I visited Zakk at the Centrum in Worcester and we were all just on the stage and just talking. I got to play Geezer’s [Butler] bass and play with Randy [Castillo]. That’s when you guys were opening up for Ozzy for No Rest for the Wicked. I was psyched to find out that we were doing this tour. I’ve known Frank, I’ve known Charlie, I’ve known all the guys for years now and we never got to tour together and Hatebreed is the best. It’s like band camp. Everybody supports each other. I think that comes out on the stage. It’s a great package of metal. It’s a great celebration.

What are your thoughts on each other as bassists?

JD: I had Frankie’s posters on my wall. I had the albums. He reminds me of Steve Harris. He rips. I learned Frankie’s licks when I was a kid. It’s awesome to see him play every night.

Frank: That’s an honor. If you don’t know how great JD is, in my book he’s one of the most underrated bass players. He’s so versatile. He’s not just a metal player either. You have the chops of death. You’re brilliant. We’ve been to a lot of clinics together and I love watching him play.

Frank, on the livestream, you’re like a whirling dervish. Was it difficult to perform without the fans’ energy?

Frank: It’s all about the song – that’s what gets me going, then the crowd. Thankfully, in my mind, I need this energy so the songs supply me with that. We had the film crew and our techs around us but in my mind that place was filled with 10,000 people. It felt so good after all that time to be a band again. I think you see that in the performance, that we’re genuinely happy to be there playing.

Was it hard to compile a setlist spanning your entire career?

It’s very hard because you can’t make everybody happy no matter what, and I think that’s a good problem to have. We mixed up this setlist as much as we possibly could, listening to the fans, listening to what they really want to hear. If you don’t play specific songs like “Caught in a Mosh” or “Indians,” people get pissed off. They paid money to see that. I get it. I’m a fan of those songs. Then you throw some curveballs in once in a while like “Only” or “Keep it in the Family.” We try to keep it fresh.

Has Anthrax been working on new music?

There will be new music and it’s [freaking] heavy.

JD, where does Doom Crew Inc. sit within the Black Label Society discography?

JD: It’s a progression from where we’ve been going. Zakk’s songwriting has just been getting better and better and as a group we all try to make it the best that we can. The songs are really good on the album. I really love the ideas, I like the direction. It’s not as heavy as it once was but it’s more groovish, more Sabbath-ish, a little bit more catchy maybe. It’s just because that’s what was coming out. I like the direction that we’re going.

What are your thoughts on playing Coney Island? As Bronx (Frank) and New Jersey (JD) guys did you go there as kids?

Frank: Neither of us has actually been there. Still, it’s a hometown crowd. New York shows are a big pain in the ass just because of the guest list. The show’s going to be great; I’m not worried about the show. It’s two minutes before the show how your aunt can’t get in or she has the wrong pass and all that stuff. Somebody’s always mad at you after the show!

Let’s talk about a couple of projects you’ve been in involved in outside of your bands. JD, you recently played on fellow Jersey guy and Symphony X guitarist Michael Romeo’s War of the Worlds Pt. 2 disc, which was released earlier this year. Tell us about working with Michael.

JD: Mike’s sick. He’s a really underrated guitar player. He’s a virtuoso. He’s a great composer, he plays classical piano, he does orchestra bits. He’s really insane. That was one of the more challenging things I’ve ever done. He writes amazing, cool, interesting riffs and it’s very progressive and heavy. It took me quite a bit to practice and get that done. I did his first record, as well, which was equally insane.

Frank, your debut EP, Then I’m Gone, is out in November. What led you to going out on your own?

Frank: When I wrote my book (Fathers, Brothers, and Sons: Surviving Anguish, Abandonment, and Anthrax) it built up a lot inside of me – a lot of crazy anger stuff. I had these songs and I put it all together. I put three songs on this. It’s just me. It’s heavy rock but it’s very angry lyrically. If you like Altitudes & Attitude (Bello’s project with former Megadeth bassist David Ellefson), it’s a continuation of that. A lot of people like that, thankfully, so if you like that stuff I think you might like this.

FOR TICKETS TO ANTHRAX, BLACK LABEL SOCIETY, AND HATEBREED’S STOP IN NEW YORK, CLICK HERE! GET TICKETS AND INFO ON THEIR PHILLY DATE ON AUGUST 28 HERE!