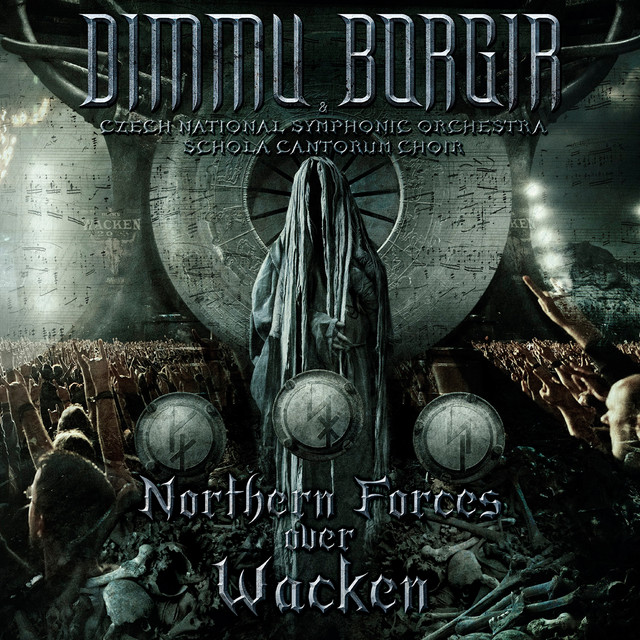 During the late sixties and throughout the seventies, live albums were treasured. For some artists, including KISS, Peter Frampton, Lynyrd Skynyrd, and Foghat, these recordings outshined their studio releases. During the eighties, however, that trend came to an abrupt end. With the arrival of MTV and home video, music fans could now both see and hear live performances, essentially turning live records into the videos’ inferior soundtracks. With the exception of a few anomalies (Bruce Springsteen and the E-Street Band Live 1975-1985 quickly comes to mind) that has since remained the case.

Dimmu Borgir’s‘ Northern Forces Over Wacken is the latest such anomaly. Captured during the band’s triumphant August 3, 2012 set at the celebrated music festival, this performance elevates all of their best-known songs to new heights – and that is thanks in part to the accompaniment of the esteemed Czech National Symphonic Orchestra and Schola Cantorum Choir. Yes, this release, which is also available in a variety of vinyl collector sets, was originally released on DVD, but in this case the audio version should not be treated as a mere soundtrack, but as a classic “headphones album.”

Dimmu Borgir’s music has always been tailor-made for symphonic accompaniment and some of their studio efforts include such pairings. The Wacken (pronounced “Vah-ken) show, on the other hand, marks the first time the celebrated black metal innovators and a large symphony performed together. The result: band classic’s such as “Gateways,” “The Serpentine Offering,” “Progenies of the Great Apocalypse,” and “Mourning Palace” are rendered with new power and might. Although this disc will probably not return live records to their former stature, it is a definite must for black metal and symphonic metal fans. (It also must be experienced as loud as possible on the best equipment available, if you can access it.)