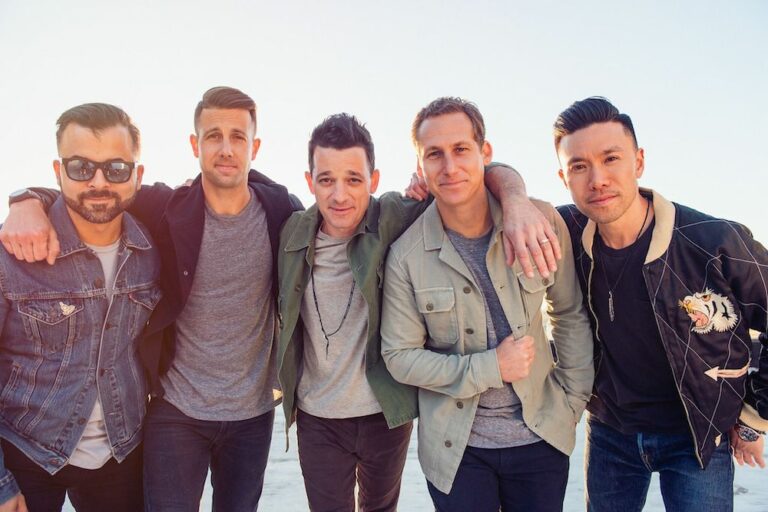 The Always Timeless O.A.R. Talk About Their New Album ‘The Arcade’

A shining surf rock star in a sea of indie rock darkness, the band behind hits like “Shattered” and “Miss You All The Time” continue to burn brighter than most.

O.A.R.’s 10th album, The Arcade, is a testament to where the band is today and how they got there. Formed in Maryland in 1996, this band has been evolving over time just swimmingly. Lead vocalist and guitarist Marc Roberge, drummer Chris Culos, guitarist Richard On, bassist Benj Gershman, saxophonist/guitarist Jerry DePizzo, alongside touring members Jon Lampley (trumpet) and Mikel Paris (keyboards), are making timeless music.

The band’s latest release shows how their sound is dipping into the influence of ska a bit, even becoming more of a carefree work of art. “In The Clouds” is proof of that, which is what made it a grand first single. “My head is always in the clouds, so high I’m not coming down. My head is always in the clouds, I’m not coming down. I love it” is the line that opens the track, proving that their lyrics are more lighthearted, melodic, and positive than ever.

The Aquarian sat down with Benj Gershman to talk about the band’s new album, where they stand in today’s music scene, and what song he carries closest to him off of The Arcade.

Where does The Arcade fall in the grand scheme of all the band’s recordings?

The Arcade is among the band’s favorite studio recordings. In my opinion, it is a beautiful record for a few clear reasons. One, it is another clear example of Marc’s many talents – from songwriting to production. It proves his ability to gather the best of ideas and focus them through his own unique lens telling a meaningful story while providing a very engaging and lively listening experience, authentic to our band‘s collective influences. Also, its stocked with truly awesome songs that will surely translate to energetic live performances we are going to make the most of at our concerts for years to come.

The album seems a little bit more lighthearted with some new influences on most of the tracks. Was that intentional?

My opinion is yes, this was all intentional. Leading the charge on this album, I think Marc arranged it so that the music is a respite from the pressures of life. Pretty sure that the listeners of our music don’t want more of those heavy elements but are simply seeking a release from the weight of the world. As a fan of Marc’s writing, and as an individual always trying to look to the bright side, I love that he provides that.

The sonic influences on this album aren’t necessarily one thing, but yes, I hear ska in it. Greater still, I recognize the overarching sound as a healthy and positive light-hearted mix of the many artists central to each band members vast list of influences.  Years back, Marc coined the idea that we have the job of making everyone at our concerts feel better when they leave than when they arrived – only makes sense that this mantra would be a driving force for the record.

The proof is in the pudding. You don’t get amazing songs like these without meaningfully amazing partners. What I think is really special about this album is that you’ve got songs created by some of the industry’s top mainstream writers/producers creating songs that live right next to others written and produced by wonderfully talented independent artists. Collectively, this batch of music really speaks to the landscape our band thrives amongst and shows how our career skates this somewhat imperceivable industry line.

The first single “In the Clouds” is a great tune. Is the accompanying video set after the theme of the movie Groundhog Day?

Thanks! Honestly, I don’t think that’s the idea with the “In The Clouds” video, but I do get how that could be a viewer’s takeaway. The song, and the album The Arcade for that matter, feels like a tip of the hat to being inside your own head. We all have a little world inside that no one else gets to see. Dealing with that can go a few ways, but my takeaway is that in this video the bubble of  one’s own mind (played by Feitelberg of Barstool Sports) is infectious and positive, even though it can be perceived as quirky, weird, or whatever.

The way I see it is in Groundhog Day the main character (the incomparable Bill Murray) is forced to live the same day over and over until he changes his own actions for the betterment of  all, thus catapulting him to a new improved reality; whereas in the video for “In The Clouds,” Feitelberg maintains his obtuse positivity which ends up influencing others to change their own actions for the betterment of all. The win is there for everyone. So, yeah, some similarities but not the same idea – to me, anyway.

You guys are a tour de force when it comes to touring and you pack not only in the crowds but the energy for each show. Where does that energy come from after all this time?

Again, thank you! That energy comes from our deep appreciation for music and life. We know all of this is a gift.  We want to reflect that on stage. We want everyone to feel it, so the songs, the performances, the intentional conversation we have with our audience, it all exudes that energy and gratitude for the music in our lives.

What feelings do you get when you listen to your older material?

To me, our songs are timeless, visceral, and personal. When listening to tunes of yesteryear, I get goosebumps – literally. Every song has a real connection to my life in different stages. Marc’s writing has always reflected the times we live in as individuals and as a band within our society. I absolutely love the songs themselves and all of the ancillary memories that go along with them. I could not be more grateful to have all this music in my life.

I can say people who have listened to our music for years are now sharing it at home and at venues with their kids. It’s new to the kids but entrenched for a decade plus with the parents. On top of that, we continue to meet people of all ages who are learning from the lyrics and tapping into their own joy when listening to music from all eras of our career – doesn’t matter what you call it when that’s going on.

How does O.A.R. fit in to today’s music scene?

Great question! Well, we have a single climbing the charts where literally every other artist on the charts has a major label backing them. It’s noteworthy that The Arcade and specifically “In The Clouds” is making such an impact via an independent record label. Our whole team deserves a pat on the back for their work on this one… and we are just getting started! There will be singles from this album besides “Clouds.”

One other thing that’s been important in our career and fitting into the music scene is that we’ve always had a great team. Just like in any industry, if you don’t have a great team, you’re gonna sink quick. We’re fortunate to have a diverse group of consummate professionals surrounding us, not just now but throughout our tenure in the business. I’m talking in the office, on tour, etc.

Can you give me some of the highlights of your favorite tracks off of The Arcade? Which tracks mean the most to you and why?

I will say that I love all of the songs on this album, however I have a deep affinity for one particular song, and that is “Nightlight.” As a relatively new father and [someone] fighting a long-term health battle, I have done so determinedly and patiently so that I can continue to provide for and protect my son. It’s been a hell of a thing for me, but throughout it all the band supported me, gave me purpose, and inspired me to get well.

Throughout most of the making of this album, I was dealing with the onset of an auto-immune disease called Hashimoto’s Disease – possibly brought on by COVID-19. In February of 2020, I had a strange upper respiratory infection, and from there things just got worse and worse for me. I lost the ability to hold an instrument, couldn’t get up the stairs in my own house, couldn’t pick up my own one-and-a-half year old son without tachycardia, heart palpitations, fatigue, and dizziness, among other numerous other challenges for months on end. But as I was able to identify and deal with my condition, I was getting emails and texts from Marc over months and months peppered with developing songs. It would be difficult to accurately describe how much inspiration this gave me to recover but in a very bland day-to-day recovery during a pandemic pretty much quarantined with an infant/toddler, these sonic escapes were my own little arcade. I looked forward to escaping from my discomfort and knew when I did recover I would hopefully be able to rejoin my brothers on the road for what I truly love to do: make music with my friends. All efforts worthwhile, it means so much to have these songs but in particular, “Nightlight,” which reminds me who and what I want to be: a protector, someone who brings the light.

O.A.R. CAN BE CAUGHT LIVE AT JONES BEACH ON AUGUST 27 AND PNC BANK ARTS CENTER ON AUGUST 28! GET MORE INFORMATION HERE!