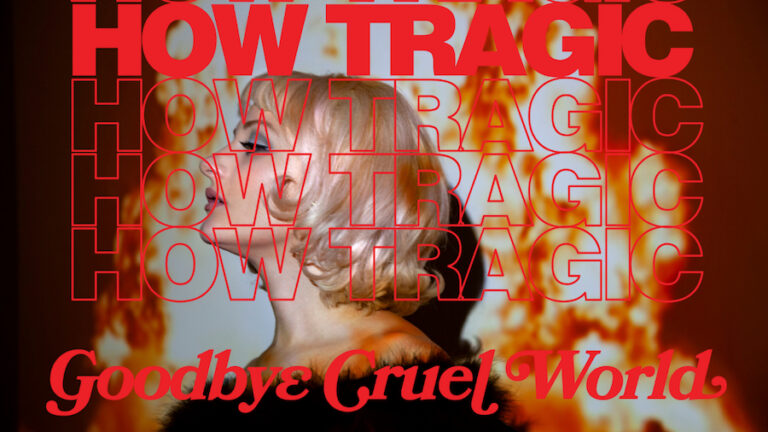 From Netflix’s Don’t Look Up to Pixar’s Wall-E and even films like the pseudo-post-apolcolpytic Avatar, the concept of our future’s healthy existence and visual landscape mixed with our people’s environmental destruction is not lost among the masses and the media.

How Tragic, a band with effervescent rock talents and socially charged moxie, have expressed the ideas of climate and environment through both song and video. The latter we are obsessed with, but most importantly, are honored to be premiering today on The Aquarian. Titled “Goodbye Cruel World,” the song is a reminder, a riveting anecdote of art and life, and a banger to say the least.

How Tragic have evident influences in everything from the aforementioned Cinema to the most kickass of post-grunge bands of the nineties and 2000s. One can hear the riff-tastic stylings of Bikini Kill and the understated melodies of Letters to Cleo grounding the work of How Tragic. “Goodbye Cruel World” is the most pertinent and relevant example of such. The song, in it’s mid-tempo excitement and female-fronted grit, is an overarching statement, riveting and vital, and a powerhouse number vocally filled with messages that work hand-in-hand with the scenes unfolding in this new music video. Soundscapes aand landscapes craft a whirlwind tale of hard truths, real beauty, and ecological understanding, all with forward-thinking punk music and eye-catching visuals setting the tone.

As the press release states, the warm, soul-stirring cross-country journey that How Tragic frontman captured clips of “stretched from the vintage elegance of the Silver Sands Motel in Southampton NY; to North Carolina in a ghostly KMart location being liquidated, and the gorgeous sand hills in Jockeys Ridge State Park; to Bisbee, Arizona at a vacant beautiful hotel and artist retreat and in the desert; and, finally, back to New York City months later with How Tragic reuniting for a filmed street performance at Coney Island.” This combination gives way to the moving reality that getting out and exploring, immersing yourself in the stories and places around our country – in our world, our planet – can act as a reminder of what we’re doing, what we’re consuming, what we’re recycling, and what we’re truly partaking in as figures in society and direct life-changers for the generations to come. How Tragic, in their Big Apple-based glory, is and an entity that is putting this on the map, literally and figuratively, and elevating it with a riot grrrl energy that today’s world needs. (Not to mention just how seriously stellar the music is when standing alone.)