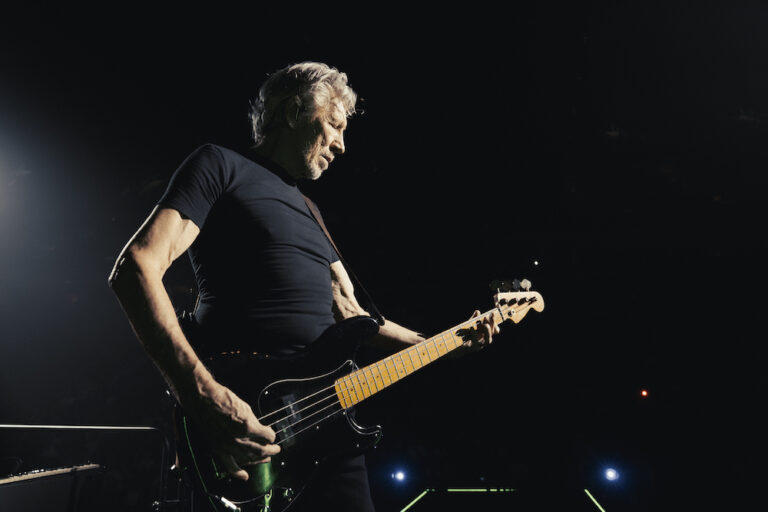 One week before his 79th birthday on September 6, Roger Waters’ This Is Not a Drill tour arrived at Madison Square Garden for two shows. Ticket holders from the originally-scheduled 2020 shows waited two years for a spectacle that capitalized on his music with Pink Floyd, stunning visual effects, and lots of anger.

The Music: Waters achieved fame in Pink Floyd, the majorly successful band he co-founded in 1965 and left in 1983 for a solo career. His fourth and most recent solo rock album, Is This the Life We Really Want?, was released in 2017, so this tour was not about promoting a recent release. Waters’ program was hugely dependent on Pink Floyd’s music and legacy. More than half of the show was comprised of songs from that period, dwarfing the catalog from his less-successful post-Floyd solo albums.

Performing in the center of the arena, Waters and some of the musicians were mobile and, depending on one’s seats, more visible than others. Waters, on vocals, piano, bass, and guitar, was supported by guitarists Jonathan Wilson and Dave Kilminster, keyboardists Robert Walter and Jon Carin, saxophonist Seamus Blake, bassist Gus Seyffert, drummer Joey Waronker, and backing vocalists Amanda Belair and Shanay Johnson. To interface with the overhead visuals, the execution of the music had to be meticulously precise. The guitar and saxophone solos were splendid, but left no room for flourishes. Waters’ vocals were barely adequate; however, he is just not a great singer.

The Visuals: Waters’ performance was driven largely by dynamic visuals with massive LED screens, a costume, and giant flying farm animals enhancing the concert experience. Lasers and other lighting effects also added strategically to the visuals throughout the evening. Thanks to a production crew of 140 people, Waters was able to stage a conceptual show like no one else.

The LED screens started at ground level in a cross shape that quartered the in-the-round stage setup. After introductory messages, the screens rose, revealing the stage. The screens periodically showed close-ups of the musicians as they performed, and a one point showed a collage of images of the original Pink Floyd in the 1960s. For most of the concert, however, the screens displayed political propaganda. The images were integral to the production and were so large, bright and kinetic that they were difficult to ignore.

Guided by remote-control, a giant inflated sheep floated around the arena over the audiences to accentuate the messages of the song “Sheep.” Waters opened the second set with “In the Flesh,” a satirical song from Pink Floyd’s The Wall, in which Waters dressed as a fascist while a giant flying pig circled inside the arena.

The Anger: The concert began with Waters’ prerecorded audio introduction and captioning on the LED screens. The messaging concluded with a very forceful message: “If you’re one of those, ‘I like Pink Floyd but I can’t stand Roger’s politics’ people, you might do well to fuck off to the bar night now.” Pow! And the music had not even started yet.

Shortly thereafter, the British rocker began his denunciation of a series of American presidents, branding them war criminals. “The Powers That Be” from his 1987 solo album Radio K.A.O.S. became the soundtrack for video projections of police officers beating unarmed, nonviolent civilians alongside the names of people who died at the hands of armed authorities. During “Run Like Hell,” which segued into an acoustic “Déjà Vu” from Is This the Life We Really Want?, the video footage showed U.S. troops shooting two journalists in 2007. The LED screens also reminded the audience members that the land they were on was stolen from Native Americans. COVID-19 molecules floated around newspaper headlines. Waters presented a bludgeoning delivery of conspiracy theories, apocalyptic depictions of nuclear devastation, and unfiltered political commentary throughout the concert.

Waters was angry about many political and social developments, past and present. America, where a wealthy Waters now lives comfortably, received the majority of the negative attention. While generously listing so many of the world’s political and social ills, Waters offered no rallying call to action, suggestions for solutions, nor offers to participate in positive-minded efforts like Global Citizen. He only had a table in the lobby promoting “free Julian Assange.”

The ticket holders came to hear Waters play Pink Floyd and to see if his show lived up to its previous reputation as an over-the-top production. The fans most likely did not come to face a barrage of uncomfortable newsreels of institutional upheaval and societal turmoil. Buying a high-priced ticket to sit at the bar, as Waters suggested, was not a viable solution. Like or loathe his messages, Waters put on a spectacular show.