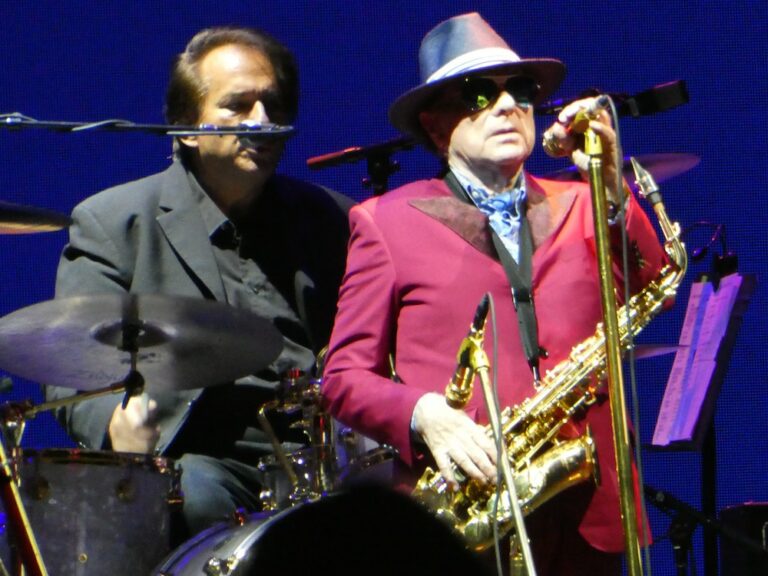 Van Morrison was a bit puzzling at Forest Hills Stadium. He did not speak and maybe never even looked into his audience. He wore sunglasses at night. He performed none of his better-known songs until “Brown Eyed Girl” and “Gloria” at the very end of the set. During “Gloria,” he silently exited the stage, leaving his musicians to jam for about five minutes before they too left the stage and the show was over. None of this enigma was necessarily a surprise, as Morrison has a reputation that preceded him.

Tom Jones, on the other hand, serving as support act, was personable and chatty. Even when he later joined Morrison on stage, Jones shared a lengthy anecdote about how he as a Welshman and Morrison as an Irishman bonded as contemporaries when they launched their music careers in the early 1960s club circuit in London, England. Together they sang two songs.

Morrison first came to international prominence in 1964 with “Gloria,” a song he wrote and recorded while he was still a member of the band Them; the song was a surprise hit, in that it was originally the B-side of Them’s single “Baby Please Don’t Go.” Upon going solo, Morrison hit in 1967 with “Brown Eyed Girl.” By the early 1970s, his distinctive vocals became an FM radio fixture with songs including “Domino,” “Wild Night,” “Tupelo Honey,” and “Moondance.” Subsequent albums were well received, but none have received the consistent attention that Morrison achieved in the 1970s. In total, he has recorded 43 solo albums, including his most recent, What’s It Gonna Take?, released on May 20.

At Forest Hills Stadium, Morrison opened with “Dangerous,” a new song which alluded to the Northern Ireland health minister who said Morrison’s questioning of evidence and repudiation of COVID-era restrictions was dangerous. The set continued with numerous little-known originals and vintage cover songs. A stylized rendition of Lead Belly’s “Good Night, Irene” with Jones and a Muddy Waters staple, “Got My Mojo Working,” were perhaps the better-known blues covers. The set included none of his signature songs from the 1970s.

Morrison was in very strong voice throughout his performance. Fortunately, his soulful vocals were turned up loud and clear, and not buried in the mix. Every song spotlighted instrumental interludes by his band members and Morrison contributed saxophone and harmonica sporadically. The arrangements were fresh and lively. This show was not designed for nostalgia.

Granted, Morrison has an extensive catalog, and the evening’s program introduced the audience to deep cuts from several of his albums. More than likely, however, many among his aging fan base purchased tickets with the expectation of hearing Morrison sing the more familiar songs they bought in the 1970s. Ultimately, Morrison performed a fine set, but the audience reluctantly had to accept that Morrison preferred to perform covers than revisit his own hits.

Thank God for the Blues

Can’t Go On This Way

Did Ye Get Healed?

What Am I Living For (Chuck Willis cover, with Tom Jones)

My Time After a While

Early in the Mornin’ (Louis Jordan and His Tympany Five cover)