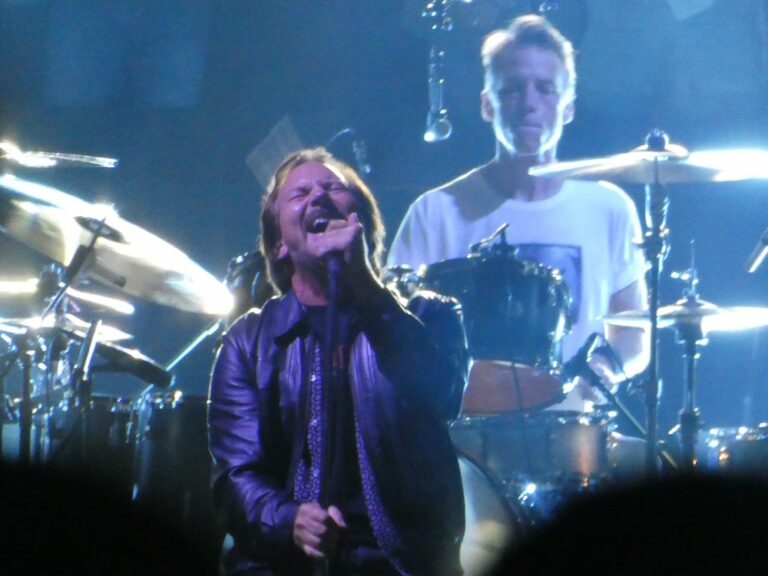 Any concert played by a touring artist in New York City on September 11 is bound to have a dutiful degree of solemnity. Early in the set at Madison Square Garden, after Pearl Jam opened with “Release” and “Garden,” vocalist Eddie Vedder honored the significance of the day and thanked all the first responders in attendance. Vedder paid respect several times throughout the evening.

“This is the 37th time this band has played in New York City,” Vedder said. “I think we’ve only played Seattle 50. Here’s the thing – I don’t remember half of those Seattle shows. I just don’t. But I feel like we remember every New York City show. This potentially has the chance to be the most memorable of them all. We are quite honored to be spending this important date with you.”

Later in the show, he recalled how America unified in the immediate aftermath of the September 11th attacks 21 years ago and lamented the present-day divisions. “There was a time we supported each other,” he concluded. “That’s the part we cannot forget. Let those lessons be remembered as our solidarity to come together and keep this country straight.”

Vedder frequently spoke between songs. At one point he paid tribute to basketball player Sue Bird, who retired after a 20-year career with the Seattle Storm. He added a shout-out to tennis players Venus Williams and Serena Williams, who enjoyed the concert from stage left. The video screens zoomed in on the sisters and the audience cheered. The sisters later reportedly caught one of Vedder’s flying tambourines.

Ticket-holders waited more than two-and-a-half years for this show, postponed from March 2020 due to the COVID-19 pandemic. The evening opened with a half hour solo set by Pluralone, the name used by guitarist Josh Klinghoffer, formerly of the Red Hot Chili Peppers. The set closed with Klinghoffer inviting Matt Cameron, Pearl Jam’s drummer, to join him on guitar for a song.

After intermission, Cat Power’s “The Greatest” blared through the speakers as Pearl Jam took the stage. The band’s current lineup consists of Vedder on vocals and occasional guitar, with fellow founding members Mike McCready (lead guitar), Stone Gossard (rhythm guitar), and Jeff Ament (bass guitar), plus Matt Cameron (drums), who joined in 1998. Boom Gaspar, a touring/session member with the band since 2002, assisted on keyboards. Klinghoffer joined on guitar as well for some of the show.

The show began with all of the musicians seated. Pearl Jam began its two-and-a-half-hour performance on the mellow side with “Release”, “Garden” and “Come Back.” With the fourth song, “Present Tense,” building to a crescendo, Vedder finally stood and a roadie reset his microphone and carried Vedder’s chair off the stage. The band began to rock in high gear. Vedder’s husky vocals were in fine shape, McCready’s guitar leads were strong and captivating, and the rest of the band added muscle consistently to propel the songs. Vedder proved to be an exceptional showman, engaging the audience by singing from the lip of the stage starting with “Who Ever Said.”

Vedder opened “Better Man” by accompanying himself on guitar. He stepped back from the microphone and offered the entirety of its first verse to audience participation. By the time the full band joined, the song went into full throttle classic rock and roll. McCready matched Vedder’s energy hopping and running in circles while playing his guitar. The musicians began to look and sound more like Bruce Springsteen and the E Street Band than a grunge band. Vedder concluded the song’s lengthy ending by swinging some windmill strums a lá Pete Townshend.

The set included many little surprises. Vedder injected into the songs brief passages from Wet Leg’s “Chaise Lounge,” the English Beat’s “Save It for Later,” and Elton John’s “Tiny Dancer.” Pearl Jam paid homage to its early Seattle grunge roots by covering Mother Love Bone’s medley of “Chloe Dancer” and “Crown of Thorns.” (The last time Pearl Jam performed those songs together was at Madison Square Garden in 2016.) Perhaps in honor of New York’s punk rock scene, Pearl Jam revived its cover of the Dead Boys’ “Sonic Reducer” for the first time in several years. “River Cross” was listed on printed setlist but not played. “Sad,” “Faithful,” and “Corduroy” were on the printed setlist as options, but also were not played.

Pearl Jam concluded its 18-song main set with “Rearviewmirror.” Called back for an encore, Vedder explained the band’s plan of action. “You know, when we booked this tour, we only had three dates scheduled in Canada before tonight. At some point, a fourth was added. I’m pretty sure the money we made from that one is going to cover the fine for playing past the Garden’s curfew!”

The band then went to a small stage behind the main stage, turned around, and performed “Elderly Woman Behind the Counter in a Small Town,” facing the fans who had been watching the backs of the musicians all night. The band then returned to the main stage, and performed heavy versions of “Why Go” and “Do the Evolution.” On “Do the Evolution,” Vedder wore a sparkly black jacket that he joked had been left behind by Harry Styles the night before. Vedder and Klinghoffer traded vocals on a cover of Prince’s “Purple Rain.” With the house lights on, Pearl Jam launched into a cover of Neil Young’s “Rockin’ in the Free World,” with Chad Smith of the Red Hot Chili Peppers joining on drums. With the house lights still on, McCready ended the show by performing a solo instrumental version of “The Star-Spangled Banner.”

“This was the best night ever,” Vedder said before departing. Maybe many in the audience felt the same way as they exited the arena.