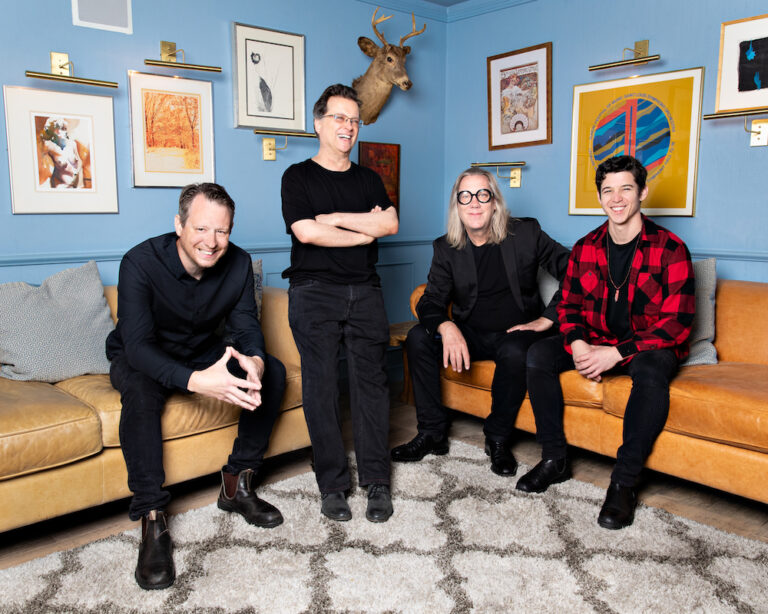 When it comes to the legacy of Violent Femmes, it’s hard to dispute their lasting impact. They have 40 years under their belt and 11 albums to their name, they are scheduled for not one, not two, but fives shows in the Big Apple next week, and they have just about two million monthly listeners on Spotify alone. Yeah… that’s a legacy.

For the past four decades, folk punk legends Violent Femmes have been beloved for witty, catchy songs such as “Blister in the Sun,” “Add It Up,” “Gone Daddy Gone,” and “American Music.” As it turns out, vocalist/guitarist Gordon Gano can be equally clever and funny in conversation, as he proves during a recent call to discuss the band’s upcoming five-night residency at City Winery New York. (The shows are set for October 9, 10, 11, 13, and 14.)

“When we play music, it’s really in the moment – connecting with an audience, and the excitement of hearing people singing along. And I enjoy, in particular, being able to see the joy that will be on people’s faces – or whatever other kind of faces they’re making,” Gano says with a laugh. He cheerfully adds that it won’t bother him if City Winery audiences takes advantage of that venue’s dining menu as they watch the show:  “If somebody’s close enough where I can see what they’re eating or drinking, then that might be interesting for me, too. I might have a comment. I think it’ll be fun.”

Gano promises that the band will play many of their hits at these shows – but he can’t predict exactly which ones an audience will hear on any given night. “We don’t use a set list. We never have,” he admits. “And anytime we’ve played more than one night in the same venue, we always especially make sure to change up songs that we’re playing in case there’s somebody who’s coming more than one night, so that they get to hear different songs.”

Even though the band have played some of their most popular songs thousands of times by now, Gano says they never grow weary of performing them because they approach their work with an element of improvisation. “There’s always a possibility that it might change and become something very different, like if we’re playing a fast song, something might happen and then we’re playing it extremely slow and then we’ll go back to playing it fast, or the other way around. Something happens and we all are reacting and responding to each other.”

He’s amused when asked if this approach ever results in things going very wrong. “Remarkably, amazingly, almost never,” he says. “Usually, it just makes it so alive. Even if it becomes a train wreck and falls apart, we can put it back together again. When the audience knows that [the band] don’t know what’s going to happen in the next moment, I think that makes it exciting for an audience.”

Violent Femmes first became known for their energetic, unpredictable shows when they got their start in Milwaukee, Wisconsin in the early eighties. They frequently busked on the street, which led to their big break in 1981 when they played outside of a show by The Pretenders, who took notice of the young upstarts and helped them get attention from record labels. Their self-titled debut came out the following year, and they had a hit with their very first single, “Gone Daddy Gone.”

Gano notes that many people who liked Violent Femmes back then have stayed loyal – and now they’re introducing their children (and grandchildren) to the band. He believes this cross-generational word-of-mouth is a crucial reason why he and his bandmates have been able to continue their career for this long.

“I think it’s that over the decades, we’ve always connected with young people,” the singer shares. “Somebody told me once, ‘If you haven’t heard of the band before college, you will hear about Violent Femmes when you go to college. Somebody’s going to be playing it in the dorm or at a party.’ I’ve heard many times that older brothers and sisters got their younger brothers and sisters listening to it. I think that that’s been a big part of our career, is having these other generations that have found out about our music.”

Another likely reason for the band’s ongoing appeal is that they are utterly distinctive, blending punk rhythms and attitude with acoustic instrumentation. Gano recalls how, when Violent Femmes first began, other musicians sometimes couldn’t understand what they were doing. For example, when their drummer chose to play a fast-tempo song with brushes (normally used in slower-paced jazz songs) instead of drumsticks, Gano recalls having another drummer tell them they couldn’t do that. “And of course, you can do that,” Gano tells us wryly, pointing out that it is these types of unique things that “shaped the sound of the band, the colors and the textures of the music.”

He gives credit for coming up with this sound to bassist Brian Ritchie and original drummer Victor DeLorenzo. “I would have probably just been a traditionalist. I would have been just, ‘Ok, a couple of electric guitars and electric bass and a full drum set and let’s go do it.’ We’ve always loved music that was all acoustic, so it felt also natural to play more with acoustic instruments, but I probably on my own wouldn’t have had that kind of an idea and taking it to the degree that we took it.”

But Gano has certainly done his part to help Violent Femmes become successful: he has, since joining the band in 1981, been the primary songwriter. His lyrics are often sung from the perspective of a disaffected young man, but they can also be disarmingly funny. “Probably every single song has at least a little bit of humor… and maybe a lot.”

Gano initially fell in love with music by listening to his father play albums by Roger Miller and Kris Kristofferson, then later absorbing his older siblings’ love for Bob Dylan and Lou Reed. He says some of his earliest memories are the times when he was making up songs and singing them. By the time he was a teenager, he was a full-fledged songwriter.

“I had an amazingly prolific year when I was 15 years old,” he says. “Some of the songs are terrible, I’m sure. But fortunately, there were some that weren’t, and they survived. There’s a song that I wrote when I was 15 on each of the first four or five Violent Femmes albums.” (For example, he says the song “Good Feeling,” which closes out their debut album, is one of these early creations.)

Although, the budding songwriter was convinced he wanted to be in a band professionally. Still, he initially kept that dream to himself. “If I said, ‘I’m going to make albums and tour around the world,’ I felt like nobody’s going to believe me – and I felt somehow that that would weaken it, so I didn’t tell anybody that was my plan. I mean, I really didn’t tell anybody until I was in a band and we were trying to see what we could do to get things going.”

Even after joining Violent Femmes, Gano admits that didn’t think things were going work out in the long run: “When we first played together, there was a definite plan that we were splitting up that fall of ’81.” That was because his bandmates told him Violent Femmes would only last for the summer, because after that they were planning to move to Minneapolis and join a band there. Fortunately – for both Violent Femmes and their fans – that didn’t work out. “So we just kept on with what we were doing – and it worked.”

It has certainly worked: Violent Femmes have become one of the rare bands that has lasted for 40 years and counting. Being able to perform a five-night residency at City Winery is a testament to how adored they are, though Gano is quick to make a bit of a joke about it. “Obviously, there’s somebody at City Winery who thinks this is a good idea,” he says, amused. “And I think, ‘Great. You think that it’s a good idea, I’m all in for it – I want to do it.’ But when I first heard about it, it surprised me because I don’t know if we’ve ever played five nights [in a row] anywhere. But it sounds like a lot of fun, so I guess we’ll just see how it goes!”