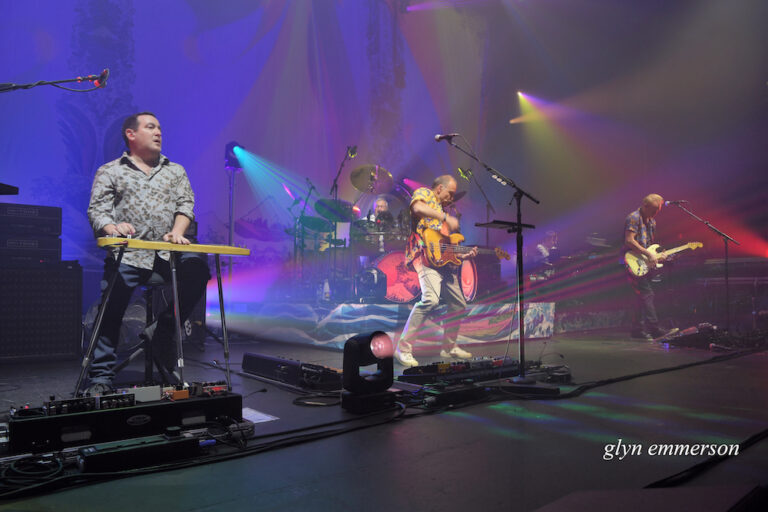 It was like a psychedelic ramble through wonderland at The Capital Theatre as Nick Mason’s Saucerful Full of Secrets took on Pink Floyd’s pre–Dark Side of the Moon catalog. Yes, that bit of twisted and beatific decadence straight from the band’s leader and principal songwriter, Syd Barrett. The night was a showcase to the fallen Floydian who checked out in 2006, but whose brilliance, songwriting, and imagery cast the stone for Nick and his merry band of gents to show off their musical chops… and have loads of fun doing so at the same time.

Returning to Port Chester where Pink Floyd played in 1970, Nick Mason was the rhythmic foundation alongside bassist Guy Pratt as they locked onto the jowls of the band’s storied canon and let their freak flag fly. They stuck to cuts off the first seven Floyd albums as they dove deeply into their lesser known, but equally stellar catalog from their debut in 1967 up to the 1972 album Obscured by Clouds.

Blasting off with “One of These Days” from Meddle, they rocked out of the gate with the hell-bent fury of a possé on a mission to set the record straight on Floyd’s early days as underground art rockers. Band members Pratt, Lee Harris, Gary Kemp, and Mason introduced themselves throughout the evening with the self-effacing humor of some countrified gents at tea party. Guitarist Harris was introduced by Mason as the guy who had the idea to put the band together. Ex- Spandau Ballet guitarist Kemp was the perfect foil to Lee as the two traded off licks from their Fender Strat’s paying homage to Barret and Gilmour’s musical genius.

Bassist Pratt, who replaced Roger Waters on tour and on the albums for the third phase of Floyd on Division Bell (post-Syd and Rodger’s reign) as well as playing on the Gilmour solo tour supporting On an Island, was the rhythmic foundation alongside Mason that the rest of the band weaved its musical vision around. He dedicated “Remember the Day” to original Floyd keyboardist and grandad to his son, Richard Wright.

Dom Beken was a quiet but essential presence on keys throughout the night filling the historic theatre with the minimalist bluesy swirl that Wright used to fill in the gaps between Gilmour’s moody bombast and Waters’ punchy bass.

“Arnold Layne,” “Candy and a Current Bun,” and “Vegetable Man” played to the childlike fortitude of Barrett’s scattered genius. Mason took to the mic and added with a wink and a smile that “Vegetable Man,” an unfinished piece by Barrett, was what the Saucerful band had “taken and arranged on its own – beating out the Waters and Gilmour camp to it, as well as the other Floyd copy bands like Brit Floyd and Aussie Floyd.”

The delicately strummed “If” by Kemp slowly merged into the somber undertones of “Atom Heart Mother Suite” and back to the moody melancholy of some of Waters’ most personal lyrics. The metallic thunder of “The Nile Song” showcased the bands early seventies take on the genre. “Astronomy Domine” from the first Floyd album started off set two as globs of red oozed, morphed, and molted onscreen to some trippy laser lights. “Echoes” was the showcase piece from the set that started off slowly with a subliminal ping, sliding guitars, crying seagulls, and rattling bass before turning into a pulsating set of rhythms and a climatic finale as it went on back to the ping and the womb of silence ending the second set.

“See Emily Play” was the first encore. The band then returned for its namesake, “Saucerful of Secrets,” and ended the night with the playful Barrett number “Bike;” closing the curtain on Syd’s endearing and ongoing influence to Pink Floyd, Mason’s Saucerful, and Roger Waters’ current touring outfit.

Cheers to Nick Mason’s Saucerful of Secrets for breathing life back into these dusty gems. Shine on you crazy diamond.