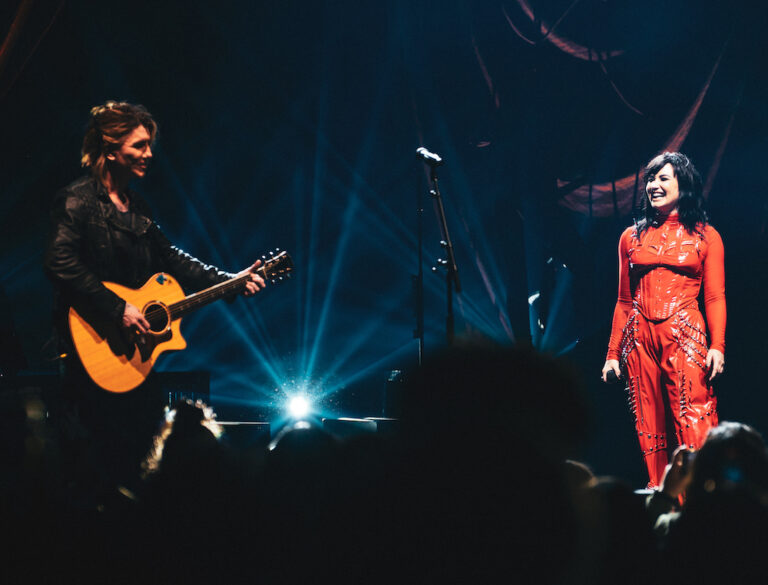 Getting In Touch with Your Senses Alongside Royal & the Serpent, Demi Lovato, & the Goo Goo Dolls

On October 18 at The Beacon Theatre, Demi Lovato filled a room with love, light, and life. In fact, every person in the room, and every worker behind the scenes, played a role in the cool, but beautiful, fall night going off without a hitch.

In 2020 we interviewed Royal & the Serpent to talk all things “Overwhelmed,” the breakout hit that got her on the bill for our friend Yungblud’s virtual tour. Well, two years later, we’re proud to say that Royal (or Ryan Santiago) is no longer ‘overwhelmed’ in the same way that you couldn’t help but be in the early days of 2020. Anxiety about relationships swirled – relations with ourselves, the people around us, and world at large. Royal & the Serpent captured those swirling feelings in an electro-pop track that was just as much of a dance-around-your-room ear worm as it was a surprise-but-much-needed-hug of a song. You could enjoy it, you could ruminate on it, you could find yourself in it. Now on tour with Demi Lovato, of whom she has a song out with, fans are able to experience “Overwhelmed” and so much more live and in person. Finally.

Royal & the Serpent doesn’t have as extensive of a catalog or as deep of a history as Demi Lovato, but the audience clung to her every word, every riff like she has been on the scene for the entirety of her life. She pranced, kneeled, crooned, and cried on stage – a true performer covering all the heartwarming bases emotionally, lyrically, and musically. Fans rocked out, danced, and were entranced by the eccentricities of the rising star. The alternative pop world cannot and will not be the same with Royal in it; these shows cemented that. Demi Lovato does the same. She bares her soul, she uses her voice, and cares for every person in the room. Lovato is, inherently, art personified. Together, the night was stunning and relatable and raw and harmonious… and a damn good time. The two acts came together for this new single, “EAT ME,” during Lovato’s set and the “Cool for the Summer” singer later brought out the Goo Goo Dolls’ frontman John Rzeznick for a cover of “Iris” that shook everyone to their core.

The Beacon Theatre is a venue adored for its acoustics, its architecture, and its ambiance. All of your senses are filled upon entering the theater, each of which are amplified by the creativity of Santiago and Lovato. Your eyes are drawn to the creative, barely-there fashion of Royal & the Serpent, you feel the pulsing sounds of electro pop under your feet, your ears are tickled with the twinkling vocals of Royal but then shocked by the power being Demi’s. The smell of popcorn, in authentic red and white cardboard boxes, wafts in and out of the room, which is a reminder that we are in the moment, in the venue, and in the world of true entertainment. Royal & the Serpent sucks you in, taking you into their mind and making you reach out and touch those around you – feeling once again. For an otherworldly performance, pinching yourself, brushing up against dancing bodies, and connecting with the artist is imperative to the vibe of the night and this opener set the tone with a vibe-filled set.

Taste, the very last of the senses, can easily be described as practically tasting the sweat of the artist on stage, belting mesmerizingly under the bright lights… but this is only a sense if you’re in the first five to 10 rows. A better taste brought upon you at the Holy Fvck tour is songwriting. Yes, you can taste good words. Painful lyrics are heavy on your tongue and require force to get out and share – something Miss Lovato does well and encourages with. Sweeter, more nostalgic lyrics are just that: sweet, and goosebump-raising. Maybe there are runs to tackle or melodies to hum, but you can taste the lyrics, you can taste their message on your tongue, feel them on your lips. Hits like “Overwhelmed” or “29,” by Royal & the Serpent and Demi Lovato, respectively, capture those moments. In fact, song after song, hit after hit, collaboration after collaboration, touched upon all five senses. How? Because everyone who walked on the stage The Beacon is a star, an emotive performer, and a human so talented and captivating that you think they are from another planet.