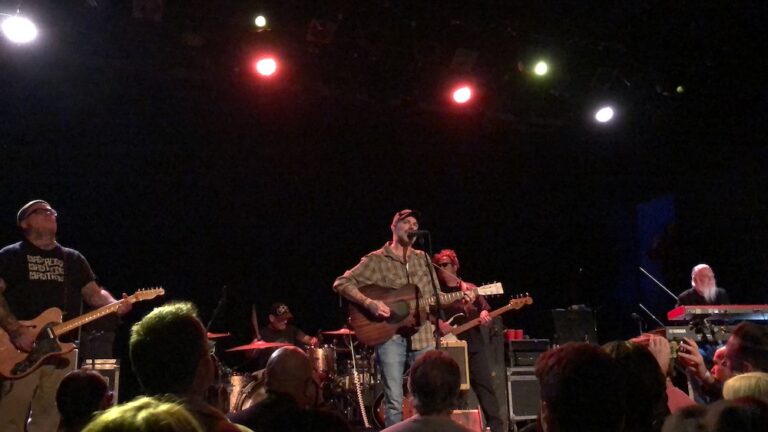 Country punk heroes Lucero rolled through Brooklyn and stopped at the Music Hall of Williamsburg on October 18 – 10 days ago exactly. They brought along with them the comedian Shane Torres and California Americana band L.A. Edwards.

Leading up to Tuesday’s show, I spent the afternoon at my day-job power-washing. Though I might have trenchfoot from not changing my socks and running to catch a train, all I could think about throughout the day was this show.

Lucero holds the title of my favorite concert I’ve ever seen. It happened last year, almost down to the date. For five years, I had been dying to see them live and they were just out of reach. I’ve stood onstage with Tom Morello, got foamed in the fourth row by Ozzy Osbourne, and hundreds of other good stories, but this band takes the cake and then some… not even the Stones, or when Paul McCartney surprised everyone at Ringo’s birthday, meets that mark.

The current lineup of guitarist Brian Venable, bassist John Stubblefield, drummer Roy Berry, keyboardist Rick Steff, and frontman Ben Nichols brought such a visceral emotional reaction last time that I wondered if I would have the same experience a year after.

Opening the show was Brooklyn native Shane Torres, who took the stage at 8:00 p.m.. His 20 minute standup set, though poorly attended, was solid. He told us hilarious anecdotes about having Lizzo’s bassist as his current roommate, being the exact same person in therapy from when he started, and a New Year’s Eve that ended with a prostitute stabbing a barbecue fork in the chest of his former trucker roommate. That’s a stroke of genius: start New Year’s in the hospital so you can only go up from there. The boys in Lucero watched and cheered Torres and these stories on from the audience.

Following Torres, a young band named L.A. Edwards took the stage. Consisting of three brothers – Jerry on drums, Jay on bass, and Luke singing while playing lead guitar – as well as Nashville’s Landon Pigg on rhythm guitar, L.A. Edwards’ sound is nuevo-Americana. Despite Luke’s denial of the Jackson Browne influence, their sound is very Browne with dashes of Townes Van Zandt and Big Star. Their set included the song “Leaving Los Angeles,” to which Luke said, “We’re not from L.A.; we’re from a small mining town called Julian, California. We’re not from L.A. but this is about L.A. – very confusing.”

Another standout in their set was a cover of Bruce Springsteen’s “My Hometown.” Directly following that, Landon stepped offstage and the three brothers shared one microphone and did a beautiful rendition of Townes Van Zandt’s “If I Needed You,” with three-part vocal harmonies before ending their set with “Trouble.” I love Townes and they crushed it. With two studio albums to their name, L.A. Edwards has a bright future in honkytonks across the nation.

Lucero hit the stage at 9:45 to Chuck Berry’s “Memphis Tennessee.” Ben, clad in a flannel, grabbed his Gibson Guild and struck up “For the Lonely Ones.” The mixing for their sets are always top-notch and they sound just as good as their records. They followed that up with “Chain Link Fence” and “Sweet Little Thing” from 2002’s Tennessee. After these throwbacks, a microphone was set up for the L.A. Edwards’ brothers to come and join Lucero on a new track titled “Drunken Moon” off their upcoming album. Ben prefaced the song by saying L.A. Edwards would be on said upcoming record! The song ended to palpable applause, and Luke shook Ben’s hand with a smile.

The setlist was full of staples such as “Among the Ghosts,” “Texas and Tennessee,” “Downtown,” and “Union Pacific Line” – a song with a lyric contributing to a future tattoo idea I have.

There comes a point in a Lucero show when the setlist becomes obsolete. The setlist exists as a guideline, but the fans all begin shouting out requests and the band obliges. It happened during that magical night last year and when I saw Ben’s solo show in January. In a way, I prefer this style of show. Instead of a band bound by the rigidity of rehearsals and repetitive nightly setlists, Lucero is able to bounce around their discography to play to someone’s heart. Sometimes you get a little botch with a deeper cut – wrong chord here, chuckle and swear word there – but it’s organic. It’s an intrepid decision by performers who want to connect with their fans.

While there were plenty of “old, sad songs,” there were also several new cuts, including “Macon If We Make It,” “Buy a Little Time,” and their latest single, “One Last F.U.”

For two hours, the quintet delivered excellent, rockin’ country. There was plenty of cheersing between the band and the fans, banter between Ben, Rick, and Brian, and smiles all around. With minimal lighting and no stage design, Lucero is able to humbly deliver a quality performance where the music and comradery are at the forefront of the experience. I cannot stress enough how great of a live band they are. The next time they come around, I hope to see you there and share a pint .