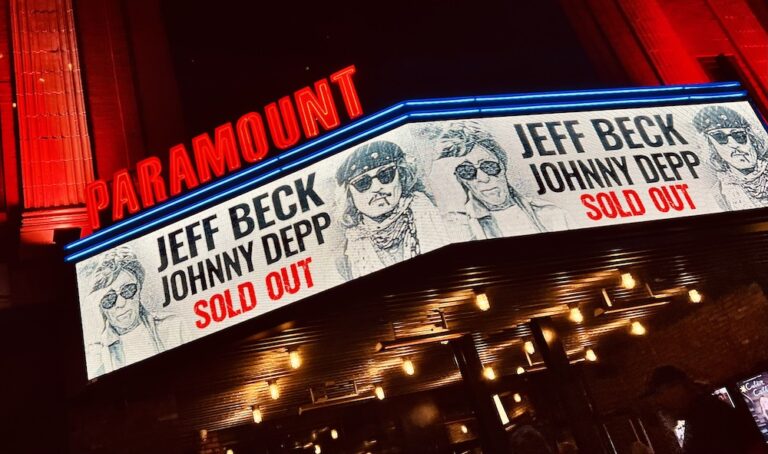 Jeff Beck & Johnny Depp at The Paramount – A Mid-October Spectacular

Night two at The Paramount was filled with a notable energy, beginning with Blow By Blow’s “Freeway Jam,” followed by the thunderous “Loose Cannon.” It was clear that Jeff Beck was locked, loaded, and raring to go. Electrified, the master of the Stratocaster was ready to begin his third number, guitar in hand. Suddenly, he stopped to soak up the welcoming cheers produced by the Huntington, New York crowd, briefly dropping his arms to his sides and looking at them. Putting his left hand back on his guitar neck and his right hand to his heart, a woman cried out “We love you, Jeff!”

Yes, we do. For reasons ethereal.

Wearing his signature ensemble of a black vest over white tee and black slacks with white piping, the English guitarist continued with his stunning version of Davey Spilane’s Irish uilleann pipe gem “Midnight Walker.” Immediately an intense wave of emotion washed over me. The sweetest notes played with the kindest touch put my busy mind on hold. Finally I was in the moment, this one being unconditionally beautiful. The eight-time Grammy winner will always carry with him the ability to wear his very warm heart on his guitar. You understand all that he’s telling you, no words necessary. What Beck has always done in spades, starkly contrasting what too many guitarists lack, is the courageous ability to translate the most complex instruments and voices with his Stratocaster, guided by his instinctual ear that is drawn purely to sentiment and melody. That hasn’t changed.

This tour with multiple Oscar-nominated actor and musician Johnny Depp has brought forth a mischievous spirit in the former Yardbird which was on full display Saturday night, October 15, rounding off a two-night sold-out residency. He exuded youthful joy, at times moving his arms around in a dance-like fashion before a song, freely smiling at both the crowd and his band in an incredibly relaxed manner. There’s no doubt that his dear friend Depp joining the tour in Washington, D.C. on October 4 had a lot to do with his overall sparkle. This past July the two released their joint effort 18, named after the age they feel when they’re together (June saw Beck turning 78 and Depp 59, respectively). Their collaboration is also Beck’s 18th studio album in total. Coincidence?

I’ve been lucky enough to personally witness Beck collaborate and tour with many different musicians. Beginning with him firing against Michael Jackson’s former monster guitarist Jennifer Batten in 1999, then sitting a mere 15 feet away from the original Guitar Shop trio (Beck, Terry Bozzio, and Tony Hymas) four years later. More lineups included the women of the Bones band, soulful singer Beth Hart, fiddle player Lizzie Ball, cello player Vanessa Freebairn-Smith, legendary drummer Vinnie Colaiuta beginning not long before a then 21-year-old Tal Wilkenfeld joined on bass in 2007. On tours with B.B. King and Buddy Guy, the variations feel endless. This current production was no less telling and added yet another dimension to Beck’s roster.

His chosen set list to his way of playing, shows just how much he still evolves and adapts, reflecting the time in his life and career. He can still play songs using at times only the weight of a feather and ending in the near silence of a whisper. Just as easily, he can launch into the rock, the roll, and the raunch. His precision touch, tone and dynamics have yet to be equaled by anyone. During “Big Block,” Beck still hit those high decibel notes that don’t seem to exist on anyone else’s guitar, which rivaled any “I love Johnny!” shrieks in the house. With numbers that also included The Beach Boys harmony laden “Caroline, No,” the energizing “Star Cycle,” classic “Brush With The Blues,” with Stevie Wonder’s tender “Cause We Ended As Lovers” capping off his near 50 minute solo set.

Beck revels in being surrounded onstage by remarkable talent, especially, at least two ladies. As much as he is the leader of the band, the legendary guitarist enjoys bathing in the glow of his bandmates and their strengths. With his longtime bassist Rhonda Smith, new addition Anika Nilles on drums and multi-talented Robert Stevenson on the keyboards, Beck let everyone have their moments to shine, all peering from behind their individual sunglasses.

Smith, the mistress of funk and soul, has never left behind her sass or smiles since joining Beck’s lineup in 2010. The former Prince bassist’s fiery presence and natural magnetism make her all-around intoxicating as she radiates an unfailing euphoria and friskiness, especially during her interactions with Beck where she reads him like a book. Her solo during the Mahavishnu Orchestra cut “You Know You Know” literally brings her to the edge of the stage, where she proudly shows off not only why she’s so respected, but her seemingly inherited Beck-isms.

Nilles was in lockstep with Smith’s warm groove, giving a refreshingly deep rumble to her fills. The German drummer also found clever ways to impersonate the Hot Rod King from behind her kit, often signaling him for a dual rather than always leaving it to him, causing motivational responses on his part. Stevenson is integral, unifying everyone in walls of steady sound. Beck communicated to all with ease, using a glance or his signature right hand straight up in the air.

“I’m gonna need a little help with this,” Beck stated before cuing the band into a ballsy version of Link Wray’s “Rumble” and facing stage left, awaiting Depp as he shyly walked onstage sporting an oversized black blazer atop two layered shirts tucked into his black jeans, topped off with his distinctive jewelry and a brown feathered fedora. Beck set off to meet him as the kindred spirits lightheartedly sauntered around together amidst elation from the crowd.

The striking Hollywood Vampire co-founder acknowledged the loving atmosphere with nods, smiles and a hand on his heart during more than one occasion. His portion of their set began with him singing his original “This Is A Song For Miss Hedy Lamarr” as he played a 12-string acoustic. Watching the alliance that these two men share in person was truly telling. A wink, a nod, a quick mind meld – their united vibe is palpable. Next they performed the first single they released together, John Lennon’s “Isolation,” a strongly poignant performance by them both. There was another Beach Boys addition with “Time,” before they moved onto their brilliant rendition of “Venus In Furs” by The Velvet Underground. Depp effortlessly riffed on electric guitar against the continuous force of nature that is Beck, with his vocals remaining strong and uniquely his own. There was no missing his composure knowing that the two time Rock and Roll Hall of Famer had his back and was including influences from the Pirates Of The Caribbean star in his playing. Amid Beck’s innate abilities now reside choppier playing, added with unabashed grit and pride.

Both the comfort and camaraderie between the two esteemed men shined brightly throughout their shared time onstage. The two friends ended their set with Beck’s long-standing cover of “A Day In The Life” by The Beatles, with Depp adding to its magic by bringing back the finely tuned George Harrison-esque 12-string acoustic, cigarette sitting between his lips. As they showed equal respect to one another with clapping, blown kisses and gentlemanly bows, Beck fondly expressed “Thank you so much,” before he looked to his left, simply saying “Depp, JD,” as the two men exited their sides of the stage.

Beck returned to begin the encore with Jeff Buckley’s “Corpus Christi Carol,” where he sung those fragile and mellifluous vocals through his guitar with mastery. Next he paid respect to Jimi Hendrix with an all-time favorite of mine “Little Wing,” to the beginnings of a standing ovation. Depp soon returned, sans blazer, to help Beck on their final number with Killing Jokes’ “Death & Resurrection Show.” Then, as the crowd began unending cheers, the two brothers in arms met in the middle of the stage and hugged each other fondly, with their individual guitars still in hand.

“My first,” Beck said lightheartedly with a laugh, holding up a white scarf with red print thrown onstage by a fan while Depp held up his guitar in thanks as he walked offstage. “It must be for me, look at it,” Beck continued with a big smile before putting it around his neck. “My pleasure,” he ended warmly in receipt of continued cheers before walking offstage for the second and final time, a bit of a skip in his step, still donning that scarf as Smith continually pointed to him with both index fingers. Yes, he is the man.

“Déjà Vu all over again,” I thought to myself. “The show’s over?” The magic of Beck, now mixed with the friendship of Depp, had caused time to become elusive, just like that first time in ‘99. Once again, I’d been hoodwinked in the best possible way.