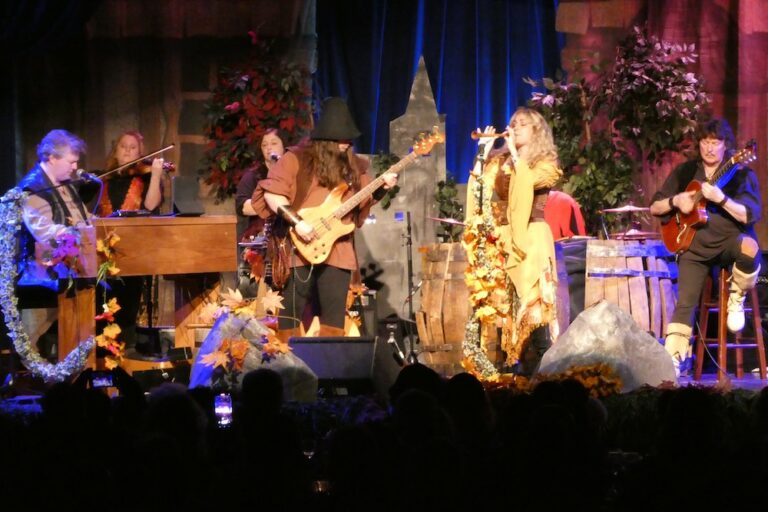 Blackmore’s Night, featuring guitarist Ritchie Blackmore of Deep Purple and Rainbow fame along with vocalist and multi-instrumentalist Candice Night, was set to celebrate the 25th anniversary of the band’s debut album, Shadow of the Moon, with a performance at Sony Hall on October 30. As the band plays a unique brand of medieval and renaissance-flavored folk rock, numerous fans at the front tables at Sony Hall dressed in medieval-designed outfits. The audience cheered when Blackmore first came on stage, thinking the show was starting, but he was checking something and returned backstage for another brief period. The audience energy was high and the expectations for a good concert were equally high.

Many things went wrong at the concert, some very evident to the audience. A few songs into the performance, a fire alarm interrupted the performance several times. The musicians repeatedly asked for the blinding stage lights to be dimmed. No one from the venue’s production crew solved the problems.

Less than an hour into the performance, with the issues not corrected, Blackmore left the stage. Night followed. The remaining musicians continued playing, eventually walking off the stage one by one, until only the drummer remained, and then he left also. After a few minutes of silence, a representative from the venue announced that the concert ended.

Blackmore’s Night perform several songs before aborting the show. These songs included “The Clock Ticks On,” “Dancer and the Moon,” “Darkness,” “Under a Violet Moon,” a cover of Deep Purple’s “Soldier of Fortune,” and “Durch den Wald zum Bach Haus.”

The band and management of Blackmore’s Night posted the following statement two days later. At press time, no one representing Sony Hall responded to the band’s management, attorneys, or this reporter.

To our fans. Never in 25 years of being onstage world wide have we ever experienced the ill treatment of band and audience by the Sony Hall NYC as we did tonight. Trying to keep emotions in check, we will describe, factually, what the attendants and people “in charge” of Sony Hall put us all through that led to total disaster and forced the show to end much much earlier than we wanted.

We had band members come in from different states, arranged production, took quite a loss financially to come play for you all at this venue. We planned on playing all night till curfew so we could all enjoy the 25 years of our music and even music beyond that scope as Ritchie’s career spans decades beyond.

When we got there, it was freezing. All our band and crew were complaining about how icy the room was. Cold often wreaks havoc with not only vocals but the fingers of those playing the instruments as well as the reed instruments and any string instruments…guitars, hurdy gurdies and violin. We repeatedly requested that they shut the air conditioner so that the room warmed up enough for us to be able to put on the performance expected of us all.

We went to get dressed, into a dressing room that had no working facilities (toilet, etc.) and when we returned to the stage we noticed that it was even colder. The stage decorations actually blowing in the direct wind current from the air con showed that the unit hadn’t been shut off at all. So band and crew stood backstage in coats hoping that the room would eventually warm up. It never did. They never shut the air conditioning off and even the fans had to keep coats on during the show. We told them we couldn’t go on until they shut the freezing air. We had to wait an additional 15 minutes after our intro tape had begun until they finally realized that we couldn’t go on until they stopped the air con. When they realized that we wouldn’t take the stage till they stopped the cold air blowing, they finally shut it off. Then we went on stage.

From our second song, a loud beeping filled the room. It went through every song we played. It would stop for a minute or two, then continue incessantly, ruining any song we tried to play. We were informed by production that it was a fire alarm pulled by someone “on the third floor in the Paramount Hotel” and, although it was unnecessary for us to evacuate the premises and everyone was safe, they refused to shut the alarm off. This beeping went on throughout many of our songs. We tried to make light of it, tried to get people to laugh and joke about it, even worked it into a song since it wouldn’t cease. But after that loud beeping throughout 1/2 of the show. we could not do anything else to overcome the constant distraction.

Add to that the fact that the assigned lighting “professional,” (which) we requested when our production team advanced the show and were assured would be provided by the venue, kept such bright migraine-inducing lights blaring into our faces, never changing, never stopping, even after we requested during soundcheck that the lighting would change and be sensitive to the song moods. Ritchie twice went on mic to tell the lighting person to shut those three bright and offending lights and was ignored each time. Candice twice told the lighting person on mic that he was putting the show in jeopardy by not lowering those lights and to please use “his faders, or even an on/off switch would be helpful at this point” and was ignored. Two fans at that point came forth to offer visors or sunglasses to wear and passed them onstage, feeling the band’s plight. It was no use. The lighting person ignored everything that was told to him and kept those lights on and blaring.

We would never play a venue without having lights and sound at the top of our list of professional asks. They are incredibly important in the scope of what we do. If we would’ve known that the techs at Sony Hall were going to be so unprofessional, we never would’ve gone ahead with the request to play that venue.

There were many other issues that happened that night, including merchandise being stolen, security issues, personal threats being made against the band members. It is abhorrent the way that that venue treated the band and the fans. We feel so sorry for those who came to see the show as we went in good faith, ready to play and have a great time with you all.

We have repeatedly requested that the Sony Hall return the money of the fans who attended the concert. Sony Hall has repeatedly ignored our communications through our agent.

We love our fans and we hope this awareness by other artists in the future will assist them to be aware of what happened to Blackmore’s Night at Sony Hall on October 30, 2022.”