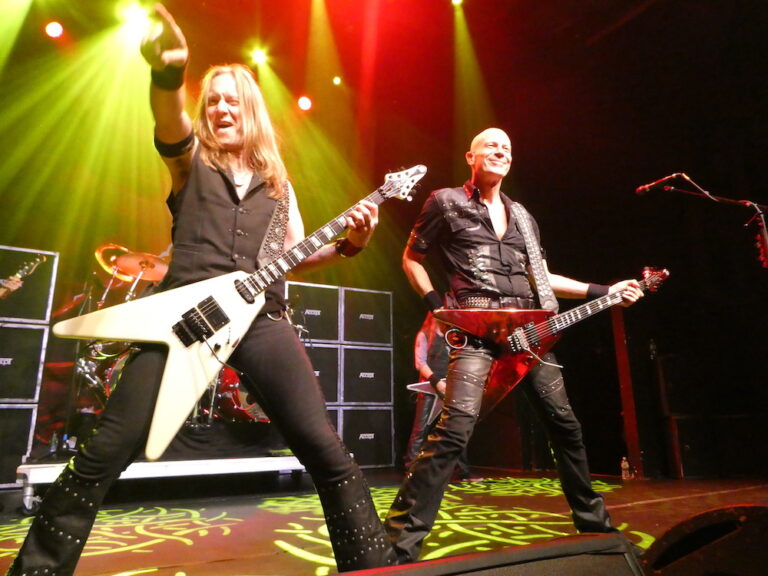 Tornillo is known locally for his years fronting T.T. Quick in the northern New Jersey club circuit. He joined Accept when the band reunited for the third time in 2009. He has recorded on the last five of the band’s 16 studio albums, including the most recent, 2021’s Too Mean to Die.

Before traveling to New York on the present tour, however, Tornillo missed several performances due to a throat ailment. The band fulfilled its gigs with other members singing Tornillo’s parts. He recovered in time for the headlining performance at the Gramercy Theatre, performing the entire set for the first time since October 15. Coincidentally, Tornillo’s first live performance in Accept was at the same venue in 2010.

From the start of the concert, performing “Zombie Apocalypse” and “Symphony of Pain” from the most recent album, Accept made clear that this would not be a night of love songs. This would be a night of old-school, classic-sounding, testosterone-fueled heavy metal. Tornillo fed the melodic verses into rallying choruses with his gutsy, gritty vocals. Gang vocals frequently highlighted the choruses. Three guitars ignited the breaks between vocal parts, often building with twin and triple guitar harmonies. The soaring guitar leads were speedy and clean, never distorted or muddy. No keyboards or synthesizers would soften the punch and crunch of the guitar riffs. The visuals also were old school, the stage lights were bright, and the front line of musicians frequently entertained by engaging in synchronized moves.

Accept’s repertoire acknowledged the band’s place in the hard rock and heavy metal surge of the early 1980s. The set was buoyed by 15 songs that the band originally released from 1980 to 1985. The encore included the best-known “Balls to the Wall,” the 1983 political anthem which stated that the tortured will rise up against their oppressors. This was not a revival show, however, as the band also performed three songs released in 2010 and four songs from 2021. As such, Accept’s performance was a revisit to the past with a grip on the present. The concert was a treat both for veteran hard rock fans and for those heavy metal aficionados who are too young to have experienced the hard rocking 1980s.

The Too Mean to Die Tour has ended its run through the United States; the tour will resume internationally in January. Meanwhile, Hoffmann announced in July that the band has begun working on new music for the follow-up to Too Mean to Die. This suggests that Accept will not rest on its laurels.