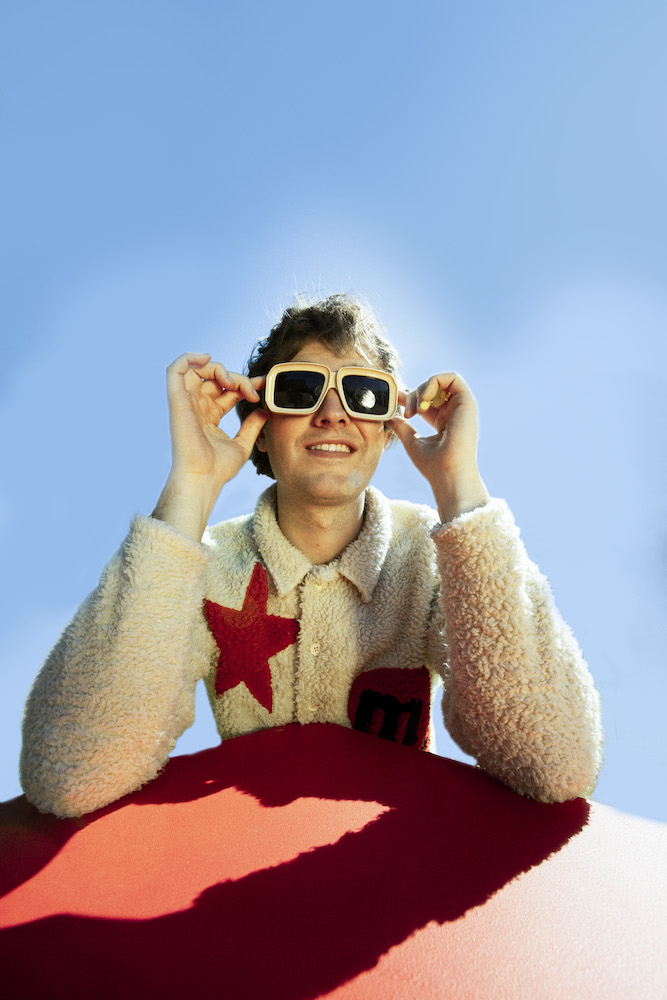 There are well over six million people listening to Dayglow every month… and that’s just those who use Spotify. Yes, that’s a lot of listeners, but they’re still on the up-and-up, too, with a sold-out Terminal 5 date tomorrow and an almost-sold-out stop at The Fillmore Philadelphia this Saturday.

“I love New York and every time I go to New York, I wish I could be there for like a little bit longer , you know, it’s always pretty in and out, but Terminal Five, I mean, that’s crazy. I never would’ve dreamed of playing that venue. It’s gonna be awesome. I can’t wait,” he admitted to us.

Sloan Struble shot out of a cannon – figuratively, not literally – just a handful of years ago and yet he’s here, now, slinky and vibe-y and having a whole lot of fun… with an audience that spans the globe. When he unveiled his new record, People In Motion, last month, it was quickly held close to the hearts of these fans, both close to home and overseas. They adopted the new stylings from Struble and grew into this album cycle with him. For more casual listeners, or the few who dropped off after Fuzzybrain, there might be a more abrupt changes to note of the art at hand. This new LP is less experimental, which can be chalked up to finding his groove, his sound, and honing in on it. It’s a bit more polished, clean, and radio-ready. This is due to the growth of Dayglow – how he’s gone from making bedroom pop in a bedroom, so to speak, to making electronic pop in a studio. The record is, at large, an interpretation of Sloan Struble now – two years out of the Fuzzybrain era and with a few RIAA-certified and chart-topping hits under his belt. He’s a bit older, a bit more production-savvy, and a bit more of a star. He hasn’t lost his syrupy sweet indie charm, though, and People In Motion expands on that wonderfully.

The Aquarian had a chance to hop on a call and talk about this new time and place for Dayglow with the DIY-based mastermind himself.

We’ve been listening to this new record nonstop for the past month now and I need to ask about “Second Nature,” how it’s just such a wonderful introductory track. Did you always know that this song would be the one to kickstart this album?

Initially I wasn’t even sure if it was gonna be a Dayglow song. I was kind of just making it for fun. Wow. I guess I didn’t think that the format of the song would fit with what I thought Dayglow was maybe a year ago. But after going on the road and playing lots of shows and realizing that there were a handful of people that really didn’t necessarily care what I did as long as I was having fun doing it, I kind of rearranged my ethos for what Dayglow can be. I was like, “I’m just gonna make whatever I wanna make,” and “Second Nature” came from that concept. Once I realized that this is a Dayglow song, I knew it had to be the opening track.

That makes a lot of sense. There is a powerful evolution that you’ve had, coming from being 19 and making music on your own and growing into this grander production of a well-known twenty-something. Still, you haven’t strived too far from what I think people know and love you for.

Absolutely. Now, People In Motion had three singles, but it doesn’t run terribly long even including them. Although, as a creative, I bet you could have filled the record to the brim with some 15-20 songs. Was it a conscious effort to kind of allow each song to have its own narrative, its own story, and its own vibe – not stringing it all together or all along into something that it’s not?

Thank you. That was the goal, yes. I like a 10 song tracklist. I think that’s just a satisfying number.

You have a lot of fun on this record. Did you have as much fun making it as it is to listen to?

I mean… I would say so, yeah. I had a lot of experiences with creative freedom when making this. I just became really grateful for the creative situation that I’m in now, because I have an audience waiting, but I also haven’t really compromised anything so far in my career. Everything is still creatively in my control and I’m really grateful for that, so I expressed my [gratitude] just through the making of this record.

There’s a Blondie-esque production to it.

Yeah, there is for sure. I love Blondie.

Did you listen to any Blondie when building out this record? We do hear many different influences on each track, but there are some core values of new wave, pop, and some funk in the beats and instrumentation.

Oh, thank you. You know, I think you summed it up pretty well: a lot of new wave stuff. A band that I discovered when making People In Motion was Pretenders. It, too, was very Blondie-esque. I don’t know if Blondie is American, but if Blondie is, the Pretenders would be like the UK version of Blondie in my opinion. They have a song called “Don’t Get Me Wrong,” which was heavily inspired by radio songs and I liked that. So, yeah, lots of new wave and eighties stuff… Talking Heads, Pretenders, Blondie.

Blondie is American. The band started right here in our and Debbie Harry’s home state of New Jersey.

Album art – Sloan, the artwork for this record tells a different story than what I thought the title would be and vice versa. People In Motion feels out the concept of movement, momentum, and this communal idea of things moving, forward or backward, for better or for worse. The art, while having a lovely and glitzy color scheme, is a box seemingly frozen in time, mirrors making up itself. How did that design come to be in regard to the lightness of the songs and the title of the record?

I love juxtaposition and art, so I wanted the title and the album art to kind of contradict each other. Contradiction always makes people ask questions. I think initially that would be the artistic standpoint of it, but for me, People In Motion was my first record that I got to make with the context of live music. Harmony House and Fuzzybrain… I just didn’t really get to play live music yet. Then for People In Motion, I made the songs for live performances after seeing what Dayglow meant to people all across the world. I kind of wanted to just take myself out of the picture for this record and have it be something that didn’t resemble me and only me like the first two records.