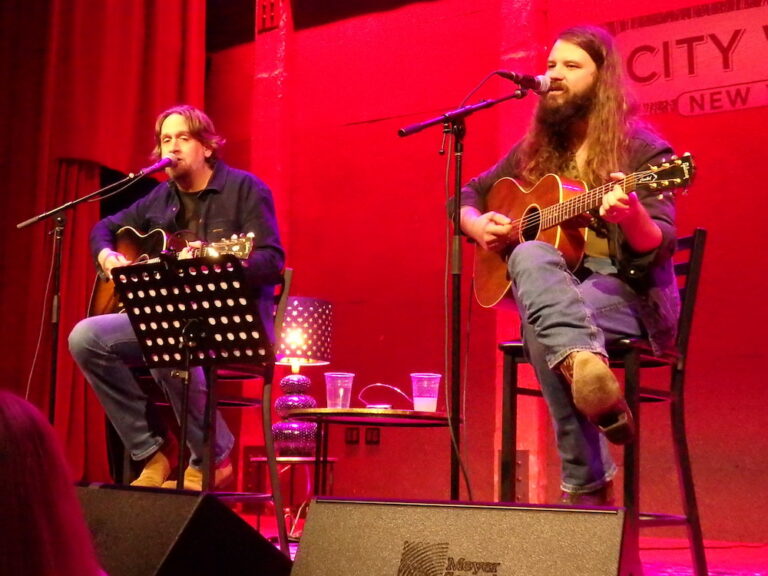 Country music has branched into so many directions that many songs marketed as country music are hardly that. If anything can save the integrity of country music, it is going to be good, honest songwriters. Welcome to the Brent Cobb and Hayes Carll show.

Cobb and Carll wrapped their 13-city “Gettin’ Together” tour at City Winery NYC. Neither came to the tour to promote a current album. Cobb’s fourth and most recent release is a gospel album, And Now Let’s Turn to Page…, released on January 22. Carll’s sixth and most recent album, What It Is, was released on February 15, 2019. This tour was not primarily about selling albums, it was two rising songwriters collaborating and enjoying their music together.

Cobb is 36 years old and Carll is 10 years older, yet both appeared on the alt-country scene about the same time in the early 2000s. Each has been nominated for a Grammy Award. In recent times, Cobb toured as the support act for Chris Stapleton’s arena tour, while Carll took his band on a tour of smaller clubs, including Brooklyn Made.

At City Winery NYC, the two songwriters appeared on a homey stage with a rug, two tall stools, a coffee table, two lamps on small tables, and sundry musical equipment. Although on stage together for most of the show, each largely played solo as the other watched, sometimes harmonizing or strumming a few chords. The evening featured just the two songwriters with their acoustic guitars and no accompanying musicians. The laid back program permitted the two storytellers to share anecdotes between songs and accept requests for songs by members of the audience.

When touring with their alt-country bands, Cobb leans a bit on Americana and southern rock and Carll on folk rock. In this stripped-down context, the songs took on new power. Cobb’s soft and sweet vocals contrasted Carll’s deeper and gruffer tone. Cobb’s delivery was soulful, while Carll’s was more plainspoken and conversational. The contrasts allowed for a variety of textures in a show propelled by voices and nylon guitar strings.

For fans of either Cobb and Carll, the duo show showcased how the two share a common songwriting style. Both specialize in writing about the ordinary events of life, narrating lyrics that are more panoramic than probing. These lyrics can raise sentiments in listeners because the scenery is familiar and very human. With no additional musicians or complex arrangements on this tour, their stories of common life rung even more poignantly. Fans of one of the artists likely came out of the venue as fans of the other musician as well.